Developers of outcome measures for pelvic organ prolapse are faced with the difficult task of addressing a wide range of symptoms from the bowel, bladder, and uterus. Historically, instruments were developed that addressed a single organ, but they have progressed to validated tools that include information relating to all three organs. The modern tools should be completed as part of the patient’s medical record, along with the physical examination and diagnostic tests. They can be performed before and after medical or surgical treatment. They are an essential part of the clinician’s and researcher’s tools in partnership with diagnostic tests.

This chapter describes commonly used validated tools developed specifically for women with pelvic organ prolapse and related symptoms. The instruments can be broadly classified as those that quantify and stage prolapse and those that quantify the range of symptoms associated with prolapse. Some scales, such as the Pelvic Organ Prolapse Questionnaire (POP-Q),1 provide a means of accurately describing the position of the organs relative to one another and the amount of relative descent of each of the organs. Others provide a means of assessing the wide range of urinary tract, bowel, sexual, pain, and quality-of-life symptoms related to prolapse. Some symptom scales are comprehensive measures that try to address all symptoms resulting from bowel, bladder, and uterine prolapse. Others are focused scales that ask detailed questions about a single complex, such as sexual dysfunction.

Historically, outcome measures for pelvic organ prolapse were single-organ instruments that required supplementation with diagnostic tests for accuracy and reproducibility. For example, the degrees of a cystocele could be staged using a standing-voiding cystourethrogram. To be accurate over time, these scales required repetition of the diagnostic tests to maintain the accuracy of the staging through the patient’s treatment and follow-up. More commonly, staging is done by physical examination alone, without the benefit of diagnostic tests. When physical examination of the patient with prolapse is done, the clinician can only speculate about which organs may be included in the prolapse in the descent of the anterior or posterior vaginal wall or the top of the vault. In this situation, the terms anterior vaginal wall prolapse and posterior vaginal wall prolapse are more appropriate than the terms cystocele or rectocele.

Researchers and clinicians recognized the need for a more comprehensive staging system that included all the pelvic organs. Although some of the older scales, such as the traditional four-stage classification system,2 are still in limited use, the POP-Q is the most widely recognized internationally.3–6

The POP-Q provides a descriptive and quantifying system for the relative position of the organs within the pelvis and enables objective staging of pelvic prolapse. The system, adapted from several classifications by Baden and Walker,7 was developed by the International Continence Society Committee on Standardisation of Terminology, Subcommittee on Pelvic Organ Prolapse and Pelvic Floor Dysfunction, in collaboration with the American Urogynecologic Society and the Society of Gynecologic Surgeons.1 The POP-Q system arose from the efforts of the committee to develop a terminology standardization document. The original document was drafted in 1993 and refined in 1994. In 1994, it underwent a 1-year review and trial, during which time several minor revisions were made.

The POP-Q descriptive system allows the clinician to quantify precisely a woman’s pelvic support without assigning a severity value; to make accurate, site-specific observations of the stability or progression of prolapse over time; and to accurately describe outcome of surgical repair. The system uses six reference points (Fig. 30-1) and a 3 × 3 grid (Fig. 30-2) for recording a quantitative description of pelvic organ support. 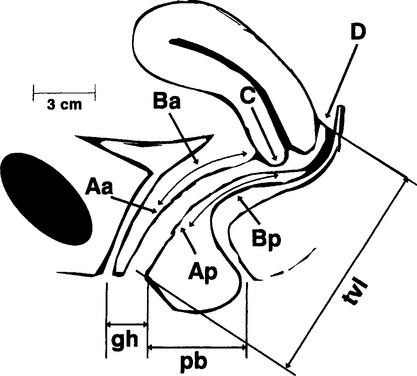 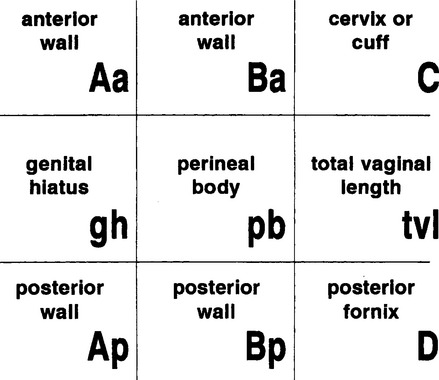 The POP-Q descriptive system uses the hymen as the best available fixed point of reference that can be consistently and precisely identified. Six points—two on the anterior vaginal wall, two in the superior vagina, and two on the posterior vaginal wall—are located with reference to the plane of the hymen. The anatomic positions of the six points are recorded as centimeters above or proximal to the hymen (negative number) or centimeters below or distal to the hymen (positive number), with the plane of the hymen recorded as 0.

Two points on the superior vagina represent the most proximal locations of the lower reproductive tract in a normal position. Point C represents the most distal or dependent edge of the cervix or the leading edge of the vaginal wall cuff (i.e., hysterectomy scar) after total hysterectomy. Point D represents the location of the posterior fornix or pouch of Douglas in a woman who still has a cervix and the level of uterosacral ligament attachment to the proximal posterior cervix. It is helpful in differentiating suspensory failure of the uterosacral–cardinal ligament complex from cervical elongation (symmetric or eccentric), in which the location of point C is significantly more positive than the location of point D. Point D is omitted in the absence of the cervix.

The numbers in the descriptive system can be recorded in the grid or, more commonly, as a series of numbers (e.g., −2, −2, −6, −7, −3, −3, 10, 3, 2), which represents clinical findings for the six vaginal points relative to the hymen and the total vaginal length (tvl), genital hiatus, and perineal body. The position of the patient during measurement should be documented, because the upright position potentially increases the stage of the descent.

The POP-Q system includes a staging method for quantifying prolapse for the purpose of describing and comparing populations, evaluating symptoms related to prolapse, and assessing and comparing the results of treatment options: 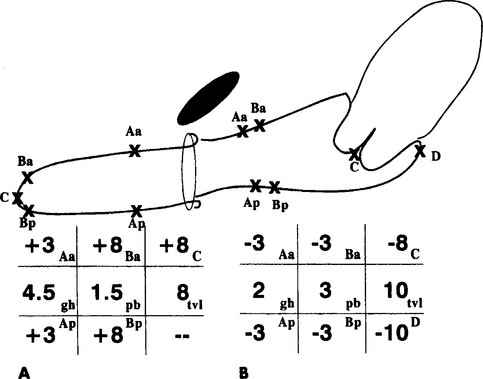 Figure 30-3 A, Grid and line diagram of complete eversion of the vagina. The most distal point of the anterior wall (point BA), the vaginal cuff scar (point C), and the most distal point of the posterior wall (point Bp) are all at the same position (8), and points Aa and Ap are maximally distal (both at 3). Because total vaginal length equals maximum protrusion, this is stage IV prolapse. B