The patient is placed in the Lloyd Davis position, with the buttocks protruding slightly over the end of the table; the thighs are abducted and aligned in a direction pointing to the contralateral shoulder. The hips, particularly on the left side, should be fully extended, and the knees flexed at 45°, so as not to interfere with the operating surgeon. Both legs should be gently rotated internally to avoid lateral pressure on the peroneal nerve. The patient’s arms are placed alongside the body to lessen the possibility of shoulder injury, and provide sufficient space for the surgeon and assistant to move freely around the operating table. Pressure points and bony prominences are padded, and the body is secured to the operating table with straps around the legs and vacuum-mattress device. A urinary catheter is placed, whereas nasogastric or orogastric tubes are optional. The patient is covered with a body warmer to prevent hypothermia. Sequential compression devices are applied to the legs for deep venous thrombosis prophylaxis. Before proceeding to the next step, it is advisable to make sure that the patient is secured to the table and does not move with Trendelenburg position and left side tilt.

Pneumoperitoneum can be established with open technique, but we prefer to use a Veress needle because it is safe and technically easy, even in morbidly obese patients. We create a small stab incision with a 15-blade knife at Palmer’s point (below the left costal margin in the mid-clavicular line). With careful insertion of the Veress needle it is possible to feel the rectus sheaths and the peritoneum as the needle penetrates through the different layers of the bowel wall. Once the pneumoperitoneum has reached 15 mmHg, we place the camera port in the umbilical region using a semiopen technique. Next, the peritoneal cavity is inspected before placing additional trocars.
The positioning of additional ports is adjusted based on the patient’s body habitus (abdominal wall surface area), site of the lesion, scars, proximity to bony structures, and abdominal wall vessels. For standard left hemicolectomy, a 12-mm port is placed in the right lower quadrant on the line between the umbilicus and the anterior superior iliac spine (ASIS) (approximately 4–5 cm medial to the ASIS). A 5-mm port is placed in the right upper quadrant along the mid-clavicular line, more than a fist-length away from the 12-mm port and at least two fingerbreadths below the right costal margin. One additional 5-mm port is placed on the left side of abdomen, two fingerbreadths medial to the left ASIS (Fig. 19.2). Ports are placed under direct vision, only after the abdominal cavity has been inspected to exclude contraindications to surgery.

The operation can be performed by mobilizing the colon first and then controlling the vessels (lateral-to-medial approach), or by controlling the vessels first and mobilizing the colon afterwards (medial-to-lateral approach). The authors prefer the medial-to-lateral approach because it allows easy visualization and control of the vascular structures, immediate delineation of the plane between the mesentery and the retroperitoneum, early identification of the left ureter and other retroperitoneal structures, and quick access to the splenic flexure.
The operating table is tilted left side up and in slight Trendelenburg position, allowing the small bowel to fall to the right upper quadrant of the abdomen. The goal is to expose the ligament of Treitz and the origin of the mesentery on the left side of the colon. This sometimes requires dividing adhesions between the small bowel and the colon mesentery. The omentum and the left side of the transverse colon should be retracted cephalad over the stomach.

When performing a left hemicolectomy, we prefer to identify and divide the IMV first, close to the ligament of Treitz (Fig. 19.3). This provides easy access to the retroperitoneum by creating a cave, by blunt dissection, along the inferior border of the pancreas and Gerota’s fascia in the direction of the splenic flexure. The attachment of the mesentery of the transverse colon to the inferior border of the pancreas is opened, entering the lesser sac. The peritoneum along the inferior border of the IMV is incised in the direction of the origin of the IMA, as the mesentery of the descending colon is lifted from the retroperitoneal structures laterally and inferiorly. The IMA is identified and dissected close to the bifurcation by extending the peritoneal incision toward the promontory. The origin of the mesentery of the sigmoid colon is lifted using a grasper, and the space behind the superior rectal vessels is entered, exposing the left ureter and the hypogastric plexus. The superior rectal artery is traced to its origin from the IMA. The IMA is isolated, sealed, and divided close to its bifurcation and away from the aorta, to prevent injury to the hypogastric plexus. Alternatively, the IMA can be approached, dissected, and divided before the IMV (Fig. 19.4). In any case, the mesentery of the sigmoid colon is dissected bluntly from the retroperitoneum exposing the left ureter and left gonadal vein in their course over the iliac vessels (Fig. 19.5). 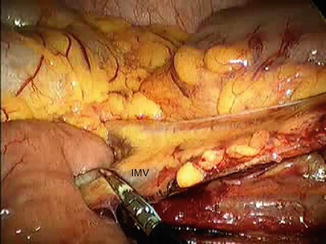 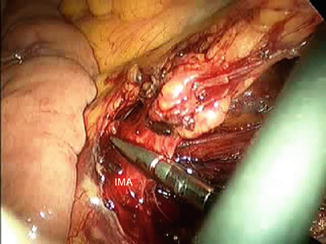 Division of the inferior mesenteric artery close to its origin 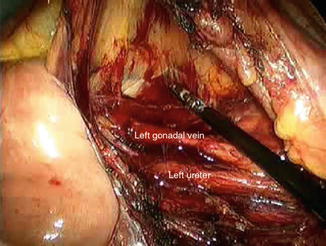 Identification and Division of the Middle Colic Vessels

Once the vessels have been divided and the mesentery lifted from the retroperitoneal attachments, we proceed to divide the lateral attachments of the colon along the white line of Toldt. During this part of mobilization it is convenient for the operating surgeon to stand between the patient’s legs and use the bipolar vessel sealer device or the laparoscopic monopolar scissors through the left lower quadrant port. The descending colon is mobilized up to the splenic flexure along the avascular plane.
< div class='tao-gold-member'>
Only gold members can continue reading. Log In or Register to continue