Initial entrance into the abdomen is performed utilizing a modified Hasson approach. A vertical 1-cm infraumbilical incision is made with electrocautery using the cut function. This is taken down to the linea alba, which is then grasped on each side of the midline using Kocher clamps. Electrocautery is then used to open the fascia between the Kocher clamps and forceps are used to open the peritoneum bluntly. It is important to keep this opening small (<1 cm) to minimize air leak. After confirming entry into the peritoneal cavity, a purse string suture is fashioned around the fascial defect and a rumel tourniquet is applied. A 10-mm reusable port is inserted through this port site allowing the abdomen to be insufflated with CO2 to a pressure of 12–15 mmHg.
A 10-mm zero-degree camera lens is used and inserted into the abdomen and an initial inspection is performed carefully to evaluate the liver, small bowel, and peritoneal surfaces. A 5-mm port is inserted in the left lower quadrant approximately 2–3 cm medial and superior to the anterior superior iliac spine. This is carefully inserted lateral to the inferior epigastric vessels keeping the tract of the port going as perpendicular as possible through the abdominal wall. If significant intraabdominal adhesions are encountered, they can usually be taken down through this lateral 5-mm port, with electrocautery scissors or an energy device. All additional ports are placed lateral to the epigastric vessels, which can be identified laparoscopically or additionally with transillumination. A 5-mm port is inserted in the left upper quadrant at least a hands breath superior to the lower quadrant port. Particularly when teaching, a right lower quadrant 5-mm port is also inserted (Fig. 16.2). Very rarely, in the case of a difficult hepatic flexure, a 5-mm right upper quadrant port may also be inserted.

Port placement for laparoscopic right colectomy
In patients with extensive adhesions, a 5-mm 30-degree camera may be inserted away from adhesions to permit lysis of adhesions adequate to insert midline ports and adequate to mobilize the omentum and colon. In patients who are morbidly obese, the left sided ports can be moved closer to or even with the midline, so that instruments can reach the right colon. If standard left sided ports are used in morbidly obese patients, the instruments simply do not reach.

The assistant now moves to the patient’s left side, standing to the left of the surgeon. The patient is placed in slight Trendelenburg position and then rotated left side down as far as the table permits. This helps to move the small bowel over to the left side of the abdomen and allows for gravitational migration of the small bowel away from the operative field. The operating surgeon then inserts two noncrushing bowel clamps through the two left sided abdominal ports. The greater omentum is reflected over the transverse colon. Appropriate orogastric tube placement is essential to allow for gastric decompression and appropriate omental retraction. The small bowel is moved to the patient’s left side with one-third in the pelvis, one-third laterally, and one-third in the upper abdomen. The tumor is assessed for size and fixation to surrounding structures as an initial assessment of resectability. The ileocecal mesentery is then grasped with a noncrushing bowel clamp and retracted to the right lower quadrant to visualize the ileocolic pedicle.

Defining and Dividing the Ileocolic Pedicle

A noncrushing bowel clamp is placed on the mesentery at the ileocecal junction. This area is then stretched up towards the right lower quadrant port, stretching the vessel and also lifting it up from the retroperitoneum (Fig. 16.3). This demonstrates a sulcus between the medial side of the ileocolic pedicle and the retroperitoneum. Electrocautery scissors are then used to open the mesenteric peritoneum along the ileocolic vessel. Blunt dissection with noncrushing bowel clamps is then used to lift the vessel away from the retroperitoneum, opening the plane cranially up to the origin of the ileocolic artery as it branches from the SMA. Electrocautery is then used to open a window in the peritoneum to isolate the vessel. Meticulous dissection ensures that the plane of dissection is anterior to the congenital layer of peritoneum lying over the retroperitoneum and its structures (duodenum and ureter). Preservation of this layer precludes the absolute need to visualize the ureter. After we have isolated the ileocolic pedicle, the vessel is then divided often with an energy device, while maintaining proximal control at its origin with a noncrushing bowel clamp. Laparoscopic staplers or other energy sources may also be used, although this requires upsizing the left iliac fossa port to accommodate a 12-mm trocar. After division of the ileocolic pedicle, the plane between the ascending colon mesentery and the retroperitoneum is developed in a medial to lateral approach out to the lateral attachment of the colon, and superiorly dissecting the bowel off the anterior surface of the duodenum and pancreas up to the level of the hepatic flexure (Fig. 16.4). 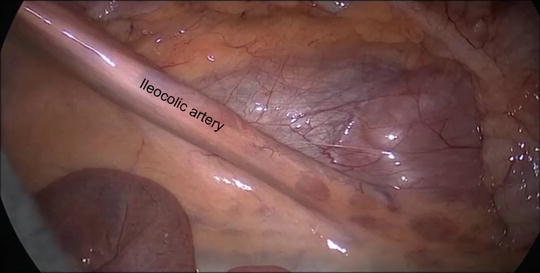 Elevation of the ileocolic pedicle in preparation for its ligation 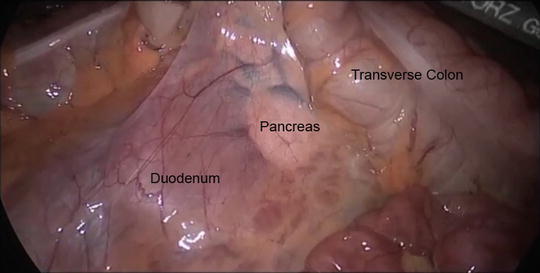 Retroperitoneal dissection of the right colon revealing the duodenum and pancreas

Mobilization of the Hepatic Flexure

The proximal transverse colon is then grasped with a noncrushing bowel clamp and drawn inferiorly. The omentum is then grasped and elevated superiorly and cranially to allow for tension on the gastrocolic ligament. This is then incised with electrocautery scissors to gain entrance into the lesser sac. The operating surgeon continues to progress along this mobilization plane to draw the hepatic flexure inferiorly and medially. Care must be taken to avoid injury to the gallbladder and second portion of the duodenum that is encountered inferiorly as the hepatic flexure is mobilized. The line of traction as the gastrocolic ligament is divided changes to more elevation of the transverse colon by the assistant and medial rotation of the proximal colon by the surgeon. It is important to keep the plane of dissection near the colon in the appropriate plane to minimize blood loss and injury to retroperitoneal vessels.
As the plane of dissection continues, one encounters the area of prior retroperitoneal dissection during division of the ileocolic pedicle. The lateral peritoneal attachments are then divided along the white line of Toldt with electrocautery scissors. This line is divided right down to the base of the cecum, and it may be possible to completely mobilize the appendix and base of the cecum to the midline from this direction. The colon is then completely dissected free from the underlying duodenum and retroperitoneum and the specimen is reflected entirely to the midline.
In patients who are morbidly obese, the release of the hepatic flexure can sometimes be facilitated by turning the patient to a reverse Trendelenburg position, and placement of an additional right upper quadrant 5-mm port to apply additional traction on the hepatic flexure.

After mobilizing the hepatic flexure, attention is turned to the transverse colon mesentery. We prefer to take the right branch of the middle colic intracorporeally, specifically in obese individuals and those with foreshortened mesentery. Attempts at extracorporeal ligation can often be extremely difficult.
The transverse colon is then elevated by two noncrushing bowel clamps and retracted towards the hepatic and splenic flexures. Initially, an opening is made above the transverse colon to the lesser sac through the avascular window. It is easy to be more posterior than expected and care must be taken not to damage the pancreas or fourth part of duodenum.
The right branch of the middle colic vessels is identified and ligated with an energy device or between clips (Fig. 16.5). It is essential that the vascular pedicle is confirmed prior to division as the SMA and vein lie deep to the dissection line and the pancreas is fully exposed as dissection progresses. 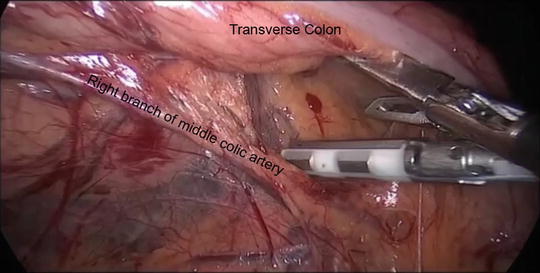 Division of the right branch of the middle colic artery
< div class='tao-gold-member'>
Only gold members can continue reading. Log In or Register to continue