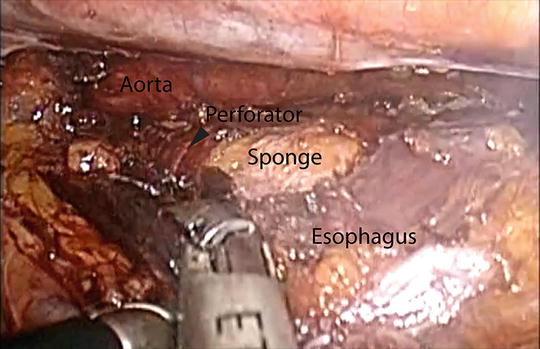 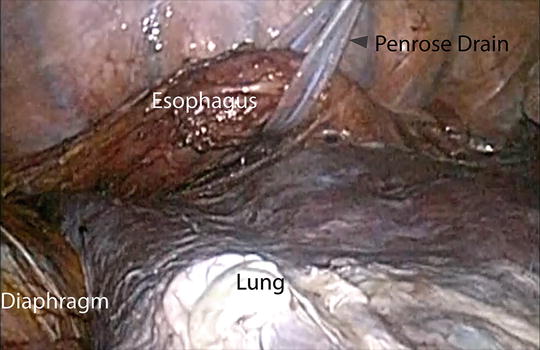 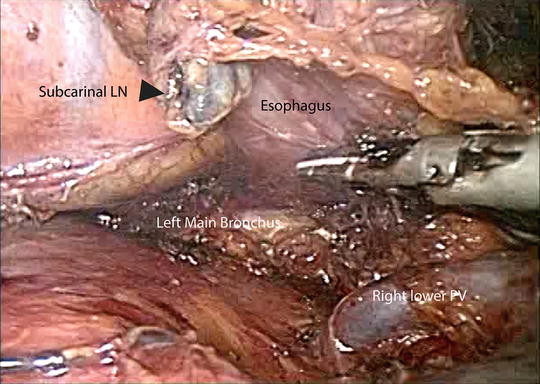 Port placement for laparoscopic preparation of the gastric conduit
Using an endograsper in the left hand and an energy device in the right hand, the lesser sac is opened and divided up to the hiatus. To avoid losing pneumoperitoneum, I leave the dissection of the hiatus for last. The greater curvature of the stomach is prepared carefully to avoid injury to the right gastroepiploic vessels. The assistant surgeon pulls the greater omentum to the left. I prefer to start the dissection of the greater omentum at the 4 o’clock position because it is easy to find an area bare of omental vessels. I use an energy device for cauterization and division of the greater omentum. Further dissection is continued towards the gastrolienal ligament by dividing the short gastric vessels. During this procedure, the assistant surgeon may pull the stomach upwards and to the right to expose the space between the stomach and the spleen.
After completing preparation of the greater curvature, attention is directed to the left gastric vessels. The stomach is pulled upward and the surgeon approaches the left gastric vessels from the left in the space between the stomach and the pancreas. Alternatively, the stomach can be pulled to the left and the left gastric vessels can be approached from the right side of the lesser sac. The left gastric vessels are isolated and divided. One can either use vascular clips or a vascular endostapler for this procedure. The left gastric lymph nodes are resected en bloc with the surgical specimen. The posterior portion of the stomach is further dissected up to the hiatus. For the gastric drainage, some surgeons prefer pyloromyotomy or pyloroplasty. Some surgeons do not recommend a gastric drainage procedure [13]. However, I prefer injection of Botox (0.4 units) into the pylorus [14].

An oblique left neck incision is made and the platysma is divided. The sternocleidomastoid muscle is retracted laterally. The middle thyroidal vessels and the omohyoid muscle are divided. The thyroid gland is retracted medially and the posterior portion of the esophagus is dissected. It is important not to use metal retractors for the medial side retraction to avoid injury of the recurrent laryngeal nerve. A careful dissection is carried out between the upper trachea and the anterior border of the cervical esophagus to avoid injury of the recurrent laryngeal nerve as well as the superior laryngeal nerve. The cervical esophagus is encircled with a penrose drain, and blunt dissection is carried inferiorly to join the dissection plane achieved in the right chest (Fig. 5.8) [6]. 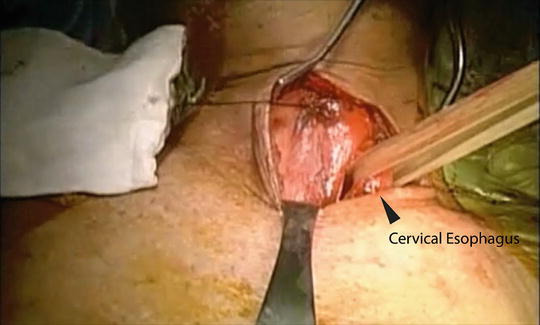 Dissection of the cervical esophagus

After completion of the cervical esophageal mobilization, attention is directed to the abdominal cavity. The lesser curvature fat pad is removed at the fourth branch point of the right gastric artery. Starting from that area, multiple linear staplers are used to construct the gastric conduit (4–5 cm in diameter) (Fig. 5.9). The conduit is separated from the specimen at the angle of His. The esophagus is circumferentially mobilized at the esophageal hiatus. If needed, a portion of the right crus of the diaphragm is divided to enlarge the esophageal hiatus to facilitate exposure and transhiatal delivery of the surgical specimen. Under laparoscopic guidance, the surgical specimen is removed through the neck incision. A plastic bag is tied onto a Foley catheter. This Foley catheter is inserted to the neck wound through the posterior mediastinum and down to the hiatus. The distal portion of the gastric conduit is sutured onto the tip of the Foley catheter (Fig. 5.10). The gastric conduit is wrapped in the plastic bag and warm saline solution is poured into the bag. Wall suction is applied onto the Foley catheter and this results in vacuum wrapping of the gastric conduit. Using this method, the gastric conduit can gently be pulled up without trauma to the ascending gastroepiploic arcade and without spiraling of the conduit. 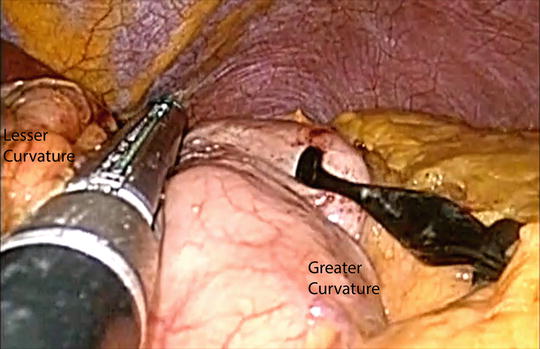 Preparation of the gastric tube using serial firings of the endostapler 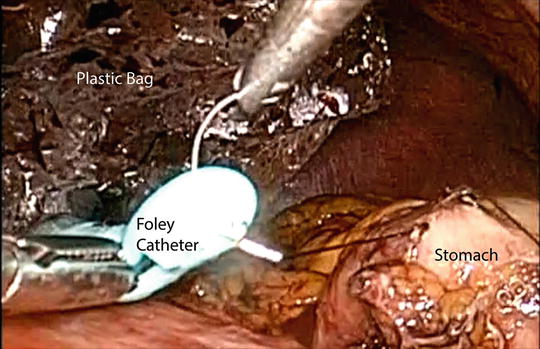 Preparation for gastric pull-up. The gastric tube is sutured onto the tip of a Foley catheter
The cervical esophagus is divided at an appropriate level, and the resection margin is sent for frozen section examination. An esophagogastric anastomosis is performed with either hand-sewn technique or with endostaplers. A nasogastric tube is passed through the anastomosis. The neck is irrigated with antibiotic solution, and the wound is closed. The laparoscope is reinserted to inspect the abdominal cavity for adequate hemostasis. The ports are removed and the port sites are repaired as usual.

Many reports suggest that early extubation after esophagectomy is associated with reduced morbidity and decreased length of ICU stay [15, 16]. We prefer to extubate the patient either in the operating room or in the intensive care unit as soon as the patient is fully awake. It is often challenging to manage the fluid balance adequately after esophagectomy. Adequate circulating blood volume and systemic blood pressure is mandatory to maintain perfusion for the conduit. However, fluid overloading should also be avoided because it could lead to increased tissue edema and subsequent pulmonary edema, which may lead to pulmonary complications [17]. Urine output of 0.5 mL/kg/h during the first 24 h is acceptable [18]. Although pain is minimal after minimally invasive three-field esophagogastrectomy, intravenous patient-controlled analgesia is generally recommended in all patients.
< div class='tao-gold-member'>
Only gold members can continue reading. Log In or Register to continue