Xp11 tRCC showing (a) gross and (b) histological features with papillary architecture. (c) Nuclear immunoreactivity for TFE-3 protein is characteristic (Reprinted with permission from Lopez-Beltran A, Scarpelli M, Montironi R, Kirkali Z. 2004 WHO classification of the renal tumors of the adults. Eur Urol. 2006; 49(5):798–805) 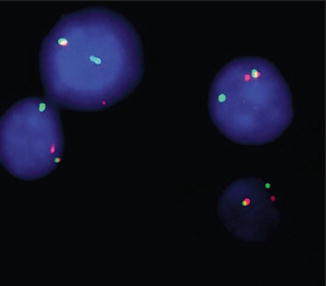 Fluorescence in situ hybridization with probes flanking TFE3 shows red-green fusion signal representing the normal TFE3 gene and separate red and green signals demonstrating a TFE3 rearrangement in all tumor cells (Reprinted with permission from Klatte T, Streubel B, Wrba F, Remzi M, Krammer B, de Martino M, Waldert M, Marberger M, Susani M, Haitel A. Renal cell carcinoma associated with transcription factor E3 expression and Xp11.2 translocation. Am J Clin Pathol. 2012; 137(5):761–8)
In general, tRCC, t(6,11) has similar histopathologic features of other tRCCs, as well as clear cell RCC and epithelioid angiomyolipoma (Fig. 7.5 ) [19, 20]. Grossly, these tumors are not easily discernable from other RCCs, as they may appear gray, tan, circumscribed, or uncircumscribed, with and without necrosis [19, 20]. The histopathological characteristics of t(6,11) include a biphasic epithelial cell morphology of large clear cells surrounding a second population of smaller cells with focal basement membrane material deposition, pseudorosette formation, and HMB-45 IHC reactivity [17, 20, 37, 38]. In a case series of three patients with t(6,11) tRCC, Inamura et al. reported that the most efficacious way to identify t(6,11) tRCC was with histopathological nuclear staining for the TFEB protein [19]. This finding was corroborated by Rao et al. in their seven-patient case series; they found that all tumors displayed 100 % reactivity to TFEBS1 and TFEBS2 [38]. Petersson et al. described a case series of four patients with t(6;11) tRCC and concluded that HMB-45 and cathepsin K are the most consistent IHC reactivity finding. In contrast to Xp11, none of the t(6;11) tumors displayed reactivity to TFE3 [20]. These varying degrees of reactivity illustrate the variation within this disease process. Based on the available literature, a combination of HMB-45 reactivity and TFEB staining may be the IHC profile with the highest positive predictive value. 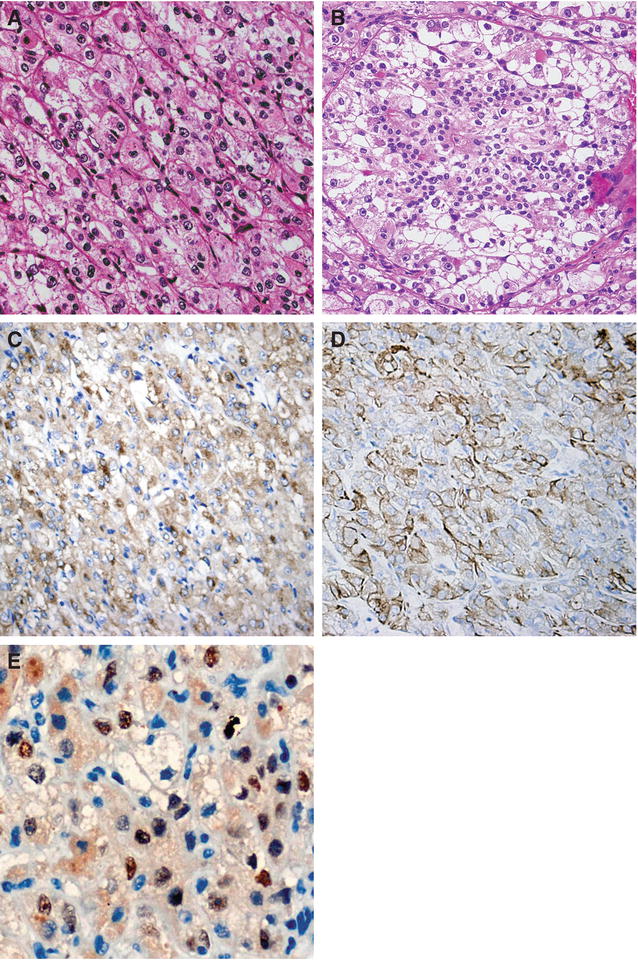 t(6,11) tRCC. (a) The tumor consists of large and epithelioid cells arranged in a nested alveolar or acinar pattern and separated by thin capillaries. (b) The small cells have narrow eosinophilic cytoplasm, and dark nuclei are characteristically clustered around hyaline basement membrane material with large acini. (c, d) Tumor cells are diffusely positive for vimentin and Melan-A and widely stained with AE1/AE3, CK8, and Cam5.2 anticytokeratin antibodies. (e) Nuclear staining with TFEB antibody is present in the majority of tumor cells (Reprinted with permission from Zhan HQ, Wang CF, Zhu XZ, Xu XL. Renal cell carcinoma with t(6;11) translocation: a patient case with a novel alpha-TFEB fusion point. J Clin Oncol. 2010; 28(34):e709–13)
To date there is no consensus for identifying and diagnosing t(3;6) tRCC. Due to the paucity of available literature, most studies describe laboratory genetic identification through microarray and FISH as the most feasible means of diagnosis [5]. This is not dissimilar to VHL disease, which is diagnosed by DNA sequencing and/or Southern blot testing [39]. Sporadic clear cell RCC is caused by VHL inactivation in 60 % of patients, and Foster et al. hypothesize that there may be a non-VHL-dependent sporadic clear cell RCC pathway that is caused by chromosome 3 translocations [5, 40, 41]. It seems reasonable to test for t(3;6) tRCC and other tRCC subtypes when an absence of VHL inactivation has been confirmed.

To date, there is no reliable and effective treatment protocol for tRCC. Currently, the principal treatment for RCC in the pediatric population is tumor resection either with partial or radical nephrectomy [42]. Although tRCCs have been more commonly associated with the pediatric population, there is no consensus on whether the treatment regimen and surveillance protocol should be altered. Children with RCC and regional lymph node involvement demonstrate improved cancer-specific and all-cause mortality as well as higher cancer-free survival than adults diagnosed at the same stage [42].
Even with more common RCC subtypes, there is still debate and controversy regarding usefulness and reliability of renal biopsy and radiographic criteria for concerning renal lesions (Fig. 7.6 ) [43]. This lack of consensus and histological criteria leads to misdiagnosis of tRCC as well as creating confusion as to treatment response. The best treatment outcomes involve protocols that recommend radical nephrectomy and lymph node dissection prior to distant metastases [44, 45]. Hung et al. reviewed eight cases of Xp11 tRCC treated at their institution from 2007 to 2010 [45]. They concluded that the factor that directly effects patient survival is the presence of distant metastases at the time of diagnosis or at the time of surgery. Of the four patients who presented with stage I or II disease at the time of nephrectomy, three were disease-free at 24, 16, and 2 months postoperatively. With such a limited number of cohorts, any conclusive recommendation is difficult in regard to advantage of radical versus partial nephrectomy and/or the impact of an extended lymph node dissection.

The AUA guideline panel for the management of the clinical T1 renal mass strongly advocates research priority for renal mass biopsy with molecular profiling to facilitate more rational management (Reprinted with permission from Campbell SC, Lane BR. Malignant Renal Tumors. In: Wein AJ, Kavoussi LR, Novick AC, Partin AW, Peters CA, editors. Campbell-Walsh Urology. 10th ed. Philadelphia. Elsevier Saunders; 2012)
In general, tRCC response to standard immunotherapy or chemotherapy is poor, and patients have a relatively short overall survival [27]. Modest results have been reported with the receptor tyrosine kinase inhibitor sunitinib [46, 47]. In a 2010 study, Malouf et al. examined 21 adult patients with Xp11 tRCC and metastatic disease that had received targeted anti-VEGF or mTOR inhibitors [47]. They observed an 8.2-month progression-free survival in the sunitinib group compared with 2-month progression-free survival observed in the group receiving cytokine therapy. A retrospective review of 15 adult patients (12 females; median age 40 years) with tRCC who were treated with targeted therapy at four centers in the United States showed an overall response rate of 20 %, with median progression-free survival of 7.1 months and median overall survival of 14.3 months [36, 48]. A Children’s Oncology Group (COG ) clinical trial is currently testing the effectiveness of antiangiogenesis agents comparing Xp11 tRCC with adult RCC [49]. A second current trial with tivantinib (agent ARQ 197) for the treatment of tRCCs showed limited effectiveness [50]; however, this is an area of continued clinical research. Although ultimately fatal, targeted therapy with both temsirolimus and sunitinib appears to be the optimal management of metastatic Xp11 tRCC [27, 46, 47].
t(6;11) tRCC has been described as having an indolent pathologic course [37]. Among the patients with t(6;11) tRCC who have documented outcomes, the majority are treated with radical nephrectomy and present with localized disease [19, 20, 37, 51–57]. However, until long-term clinical outcomes are available, a potential aggressive clinical course for patients with t(3;6) tRCC should not be underestimated as they may require assertive treatment and follow-up.
Due to the aggressive nature and advanced-stage presentation of Xp11 tumors, the effectiveness of metastasectomy has been brought into question. Although the usefulness and feasibility of metastasectomy in advanced Xp11 tRCC has not been established, studies have reported successful results performing metastasectomy for patients with limited metastatic disease and with histopathologic variants similar to prototypical RCC [58–60]. In general, as with typical RCC, isolated pulmonary metastases are lesions most amenable to metastasectomy, with median 5-year survival rates of 35–50 % [58–60]. Kavolius et al. reported a series of 278 patients with recurrent RCC, of whom 141 (50.7 %) underwent curative metastasectomy and 70 (25.2 %) underwent noncurative metastasectomy [59]. Multivariate analysis identified a solitary metastatic lesion, age <60 years, and disease-free survival of >12 months as favorable prognostic factors [59]. These findings, along with tRCC’s relative lack of sensitivity to current chemotherapeutic and radiotherapeutic agents , add evidence albeit weak, to the prospect of utilizing metastasectomy in the treatment protocol of patients with metastatic Xp11 tRCC.

As with diagnosis and treatment, there is currently no proven, reliable, or effective surveillance algorithm for tRCC for patients after radical nephrectomy . However, in 2006, Chin et al. developed and proposed a novel staging system for RCC that incorporated the 1997 TNM classification with the Eastern Cooperative Oncology Group performance status and Fuhrman grade (UCLA Integrated Staging System) into a single prognostic algorithm [61]. They recommended treatment follow-up according to stratification into low-, intermediate-, or high-risk categories . Because Xp11 tRCC has an unpredictable and aggressive disease course, it is reasonable to stratify patients with Xp11 tRCC as high risk and place them into the proposed post-nephrectomy surveillance algorithm developed by Chin et al. Their protocol recommends (a) history, physical examinations, and laboratory tests every 6 months for 3 years and then yearly until 10 years; (b) chest computed tomography every 6 months for 3 years and then yearly until 10 years (chest computed tomography alternating with chest radiography after 3 years); and (c) abdominal computed tomography every 6 months for 2 years, yearly until 5 years, and then every 2 years until 10 years [61]. In addition to their recommendations, because Xp11 tRCC is often diagnosed in young adults, it may be reasonable to suggest lifelong surveillance with yearly history, physical examination, and laboratory tests and chest and/or abdominal imaging, as deemed clinically necessary, after completing the previously described 10-year surveillance regimen (Table 7.1 ) [62]. The rarity of t(6;11) tRCC and chromosomal 3 tRCCs does not enable definitive recommendations regarding a surveillance protocol after treatment. At this point, it seems reasonable to recommend the same surveillance protocol as with Xp11 tRCC until further clinical outcomes are reported.