Nonneoplastic Kidney Diseases in the Setting of a Renal Mass

(a) H&E and (b) PAS. Diffuse mesangial sclerosis is characterized by increased matrix deposition in mesangial regions and represents one of the earlier changes in diabetic glomerular injury. The periodic acid Schiff (PAS) reveals these mesangial changes much more readily especially at the lower magnifications compared with the H&E slide. (c) Nodular mesangial sclerosis with acellular (Kimmelstiel-Wilson) nodules indicates a more advanced phase of diabetic glomerular injury with typically a longer clinical history of diabetes that may also correlate with the presence of proteinuria. This glomerulus was located in an area of tumor compression. (d) Arteriolar hyalinosis involving both the afferent (arrow) and efferent (arrowhead) arterioles is characteristic of diabetic nephropathy, while hypertensive vascular disease preferentially involves the afferent arteriole alone

Approximately 30 million Americans have diabetes, and it is estimated that over 25 % have not yet been diagnosed. Therefore, the pathologist has the unique opportunity to identify some of these undiagnosed patients. We believe that any diagnosis of diabetic nephropathy should trigger direct communication with the treating clinicians and result in nephrology consultation.

Hypertension is another well-established risk factor for RCC and occurs in 25–60 % of RCC patients [26, 27]. As a consequence, the corresponding kidney injury is commonly observed in a significant subset of these patients. However, hypertensive nephropathy consists of a constellation of nonspecific pathologic features, such as global glomerulosclerosis (Fig. 13.2a), interstitial fibrosis, tubular atrophy (Fig. 13.2b), and arteriosclerosis (Fig. 13.2c). In addition, the pathologist may not be able to ascertain whether the patient has hypertension, which can be further confounded by antihypertensive therapy. Therefore, some nephropathologists prefer the use of descriptive terms, such as arterionephrosclerosis or vascular scarring (arteriosclerosis), to describe the pathologic changes without ascribing a definitive etiology. 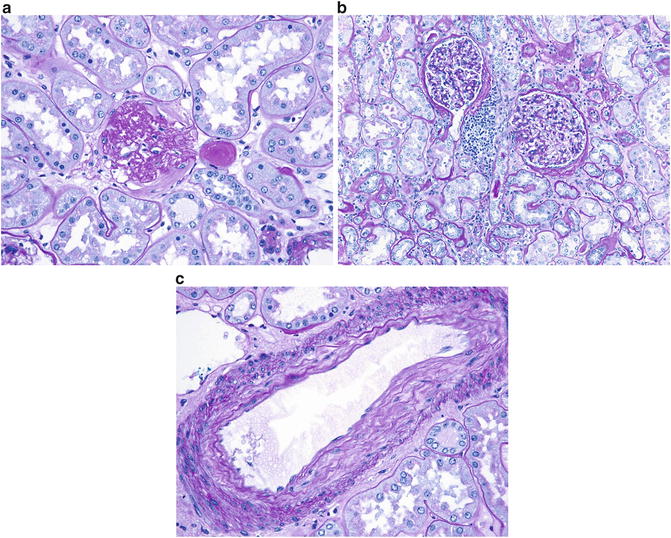 (a) Global glomerulosclerosis or complete scarring of an entire glomerulus is a nonspecific finding that can be observed in any glomerular injury. It is clear that glomerular filtration cannot occur without the presence of any patent capillaries. (b) Interstitial fibrosis and tubular atrophy are characterized by thickening, fraying, and wrinkling of tubular basement membranes of atrophic tubules that are separated from each other by interstitial fibrosis. The presence of mild interstitial inflammation in the areas of tubulointerstitial scarring is typical and should not be considered evidence of acute interstitial nephritis. There are also two mildly ischemic glomeruli present. (c) Arteriosclerosis is characterized by intimal fibrosis and varying degrees of multilayering of the internal elastic lamina
Regardless of the terminology that is used, it is important to identify the subset of patients at greater risk for CKD progression. Based on the available data, the finding of greater than 20 % global glomerulosclerosis predicts a significant decrease of the glomerular filtration rate after radical nephrectomy [24]. Therefore, this finding should trigger additional nephrology consultation.

Focal segmental glomerulosclerosis (FSGS ) has been identified in 2–9 % of tumor nephrectomy specimens. In this setting, FSGS likely represents a secondary cause due to substantial nephron loss and hyperfiltration rather than a primary podocyte injury. The identification of hyaline or matrix occluding any of the glomerular capillaries (Fig. 13.3) is sufficient for this diagnosis and typically occurs in the background of arterionephrosclerosis as described in the previous section. 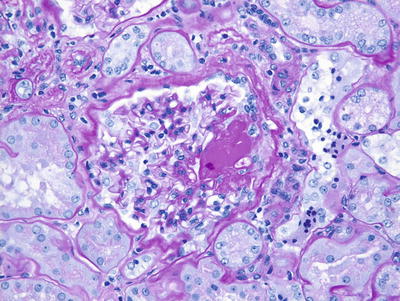 The finding of thrombi in arteries, arterioles, or glomerular capillaries may be consistent with thrombotic microangiopathy (TMA ). However, we have observed rare glomerular capillary thrombi adjacent to the tumor resection margin, which likely represent a consequence of surgical manipulation and may not indicate the presence of an underlying thrombotic microangiopathic injury . Some tyrosine kinase inhibitors , such as sunitinib, are increasingly used in RCC patients and can directly affect vascular endothelial growth factor receptors, which can cause TMA. However, these therapeutic drugs are generally given after surgery when indicated and not administered as neoadjuvant therapy.

Occasional cases of concomitant membranous nephropathy, IgA nephropathy, or pauci-immune crescentic glomerulonephritis have been reported. In theory, any nonneoplastic kidney disease could occur in the setting of RCC by coincidence.
We recommend that the treating physician should specifically inquire their pathologist about the presence of nonneoplastic kidney diseases, especially when a history of diabetes, hypertension , or proteinuria is present or if the estimated glomerular filtration rate is below 60 mL/min. Clinical practice guidelines have not been established but are needed to aid the treating physicians through these complex medical issues. The evaluation of the nonneoplastic kidney parenchyma is now required by the College of American Pathologist protocols for the evaluation of all tumor nephrectomy and nephroureterectomy specimens [17]. However, it is unclear whether this modification has resulted in significant practice behavior changes among surgical pathologists since its implementation in 2010. With the number of kidney cancer survivors approaching 350,000 in the USA, significant gains in the clinical outcomes for kidney cancer can be achieved with additional attention on the presence of nonneoplastic kidney diseases and improved coordination between urologists, nephrologists, and pathologists.
References
1.
Patard J-J. Incidental renal tumours. Curr Opin Urol. 2009;19(5):454–8.CrossRefPubMed
Only gold members can continue reading. Log In or Register to continue

Tags: The Kidney
Nov 27, 2016 | Posted by admin in NEPHROLOGY | Comments Off on Nonneoplastic Kidney Diseases in the Setting of a Renal Mass
Premium Wordpress Themes by UFO Themes
WordPress theme by UFO themes