Overview and Staging of Renal Neoplasms

Several new subtypes of RCC are recognized in the ISUP Vancouver classification such as tubulocystic RCC, acquired cystic disease-associated RCC, clear cell (tubulo) papillary RCC, MiT family translocation RCC (including t(6;11) RCC), and hereditary leiomyomatosis RCC syndrome-associated RCC. Some newly described RCCs are also considered as provisional entities such as thyroid-like follicular RCC, succinic dehydrogenase B deficiency-associated RCC, and ALK-translocation RCC. Additional data are needed to help shed light on the biology of these rare unique tumors. Some innovations were also made on traditional tumor entities, such as renaming multicystic clear cell RCC as a neoplasm of low malignant potential, subtyping papillary RCC into type 1 or 2, accepting the hybrid oncocytic/chromophobe tumor as a discrete subtype of chromophobe RCC, and merging cystic nephroma with mixed epithelial stromal tumor into one tumor spectrum. Despite the inclusion of these novel entities, clear cell RCC, papillary RCC, and chromophobe RCC still comprise >90 % of the RCCs. The proportion of MiT family translocation RCC however is higher in pediatric and young adult patients.

The tumor node metastasis (TNM) is the most widely accepted staging system for renal cancer [2]. This approach measures the extent of cancer spread at the primary organ site, regional lymph nodes, and distant sites (Table 4.2). The TNM system underwent considerable revisions over the past three decades with its latest edition (seventh) published in 2010, and a new version is being expected within the next 2 years as of 2015. Purely based on the tumor’s anatomic extent, the different TNM stage categories are lumped into four main prognostic groups (Table 4.3). The clinical (c) stage is routinely used as a guide in determining the type of primary management , such as nephron sparing surgery (NSS) or ablative therapies for low stage renal tumors or systemic therapy for advanced stage tumors. The pathologic (p) stage mainly provides prognosis of outcome after surgical resection of renal cancer and is important on the decision for adjuvant therapy. TNM stage is often incorporated in the inclusion criteria and in stratifying patients for clinical therapeutic trials. The accuracy of TNM stage in renal cancer can be further enhanced by its integration in the different prognostic and predictive models such as the MSKCC prognostic nomogram; the Mayo Clinic stage, size, grade, and necrosis (SSIGN) score; and the UCLA integrated staging system (UISS) [3–7].

Definitions of the 2010 AJCC TNM staging for renal cancers

In 1958, Flocks and Kasdesky [8] introduced one of the first formal stagings for renal cancer based on the tumor’s anatomic extent and patterns of spread. A year later, Petkovic [9] proposed a similar classification that subdivided intrarenal tumors into stages I and II (Flocks and Kasdesky’s stage I). In the 1960s, Robson modified these systems, incorporated venous involvement, and subdivided localized extrarenal spread [10, 11]. However, Robson’s system was hampered by inaccuracies in some of the stage definitions due to the lumping of prognostically different patterns of anatomic spread [11].
First developed in the 1940s by Pierre Denoix in France, the TNM system was adopted by the Union Internationale Contre le Cancer (UICC) , while the American Joint Commission on Cancer (AJCC) used a slightly different classification. In 1987, the UICC and AJCC were unified, and the first major revision of the TNM staging was published that incorporated tumor size cutoffs derived from cross-sectional imaging studies. Since then, the TNM system underwent several major revisions published in 1993 (supplement), 1997, 2002, and the latest in 2010, building on experiences and evidences accumulated from each prior version in order to enhance its prognostic accuracies (Table 4.4). Revisions in the 2010 TNM system include T2 tumors divided into T2a (>7 cm but ≤10 cm) and T2b (>10 cm); ipsilateral adrenal gland contiguous invasion classified as T4 and, if not contiguous as M1, renal vein involvement reclassified as T3a; and nodal involvement simplified into N0 and N1 [2].

Components of the TNM Staging System for Renal Cancer

Since the 2002 TNM version, T1 tumors are subdivided into T1a and T1b using 4 cm size cutoff (Figs. 4.1 and 4.2). This was mainly based on the study by Hafez et al. [12] wherein they reviewed 485 patients with localized renal cancer treated with NSS and showed a more favorable cancer-free survival in tumors ≤4 cm compared to larger tumors. Since then, the prognostic impact of this subdivision has been validated in subsequent studies [13–17]. Despite of several studies suggesting a different optimal size cutoff for T1a and T1b and T1 versus T2, the 4 and 7 cm cutoffs are retained in the current 2010 TNM system [18–22]. By incidence, most renal cancers are diagnosed as T1 tumors (~55 to 70 %) and with greater T1a (35–45 %) than T1b cases (19–27 %) (Table 4.5) [23–25]. A practical usefulness of this T1 grouping is that most of the current guidelines recommend NSS for T1 renal cancer when technically feasible, and this recommendation is generally accepted for T1a tumors. 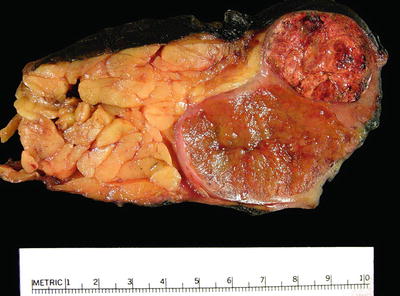 Kidney with two synchronous organ-confined tumors . The smaller tumor (top) is T1a and the larger tumor (bottom) is T1b. Multiple tumors are staged according to the highest T stage, in this case as T1b 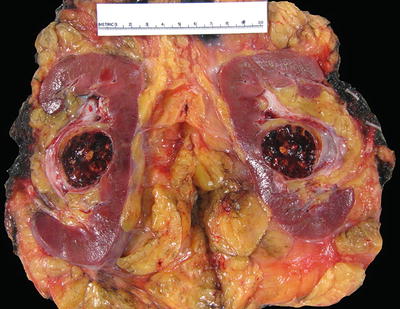 T1a clear cell RCC that is very close to the hilum. In this case, adequate sampling of the tumor-sinus interface is important to ascertain the absence of invasion (T3a)
Table 4.5


Only gold members can continue reading. Log In or Register to continue

Tags: The Kidney
Nov 27, 2016 | Posted by admin in NEPHROLOGY | Comments Off on Overview and Staging of Renal Neoplasms
Premium Wordpress Themes by UFO Themes
WordPress theme by UFO themes