(a) Operative positioning of the patient in modified lithotomy position. The robot is docked between the legs. (b) The placement of trocars is depicted for robotic abdominoperineal resection. Maintaining the lateral trocars in a slightly downward curve across the abdomen permits greater access to the pelvis for distal dissection. The spacing between robotic ports is critical to avoid collision between robotic arms

With the robot docked the operation is performed using a zero-degree camera. The lymphovascular dissection is performed at the base of the IMA. Including this nodal tissue up to at least the origin of the superior rectal artery with the specimen is crucial to a successful oncologic resection. Identification of the IMA begins by using arm 3 to help retract the sigmoid colon or sigmoid mesentery anteriorly and laterally toward the pelvic sidewall to tent up the base of the mesentery. Given the lack of tactile feedback with minimally invasive instruments, it is important to avoid grasping the viscera, which can result in a crush injury. Rather the retraction can be done by sweeping the colon, or if grasping is required this should be limited to the peritoneum or the epiploicae. Identification of the IMA is facilitated by incising the peritoneum along the medial aspect of the rectosigmoid mesentery to expose the areolar retrovascular plane that can be followed cephalad to the origin of the IMA.
Once the retroperitoneum is incised, the superior rectal vessels can be elevated and the dissection to elevate the mesocolon from the retroperitoneum in a medial-to-lateral fashion continues. The ureter and gonadal vessels should be visualized below the plane of dissection and the use of cautery should be judicious until the ureter is clearly visualized to avoid injury. Once the plane has been established, it can be carried cephalad to visualize the base of the IMA. This step is crucial to the oncologic quality of the resection and is important because it is also a point of potential nerve injury. The sympathetic nerves innervating the pelvis form a plexus along the aorta at the IMA and are at risk for injury during the IMA dissection. Elevating the lymphatic tissue surrounding the base of the IMA up towards the surgical specimen rather than dissecting down toward the retroperitoneum will help delineate the anatomy and ensure complete lymphadenectomy. A window can then be created on the superior aspect of the IMA allowing space to divide the vessel with a stapling device, vessel sealing device, or clips (Fig. 25.2). 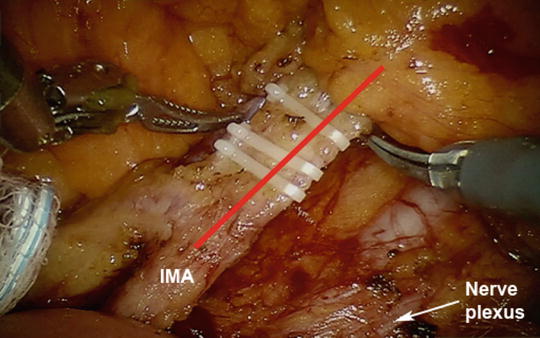 During dissection of the inferior mesenteric artery (red line), identifying the correct plane between the mesocolon and the retroperitoneum can help avoid injury to the hypogastric nerve plexus (white arrow). Clips have been placed across the inferior mesenteric artery prior to dividing the vessel
One alternative to the IMA dissection described above is to divide the superior hemorrhoidal artery and vein just distal to the origin of the ascending left colic artery. The lymphatic tissue along the IMA out to the left colic branches can easily be mobilized onto the specimen to clearly delineate the anatomy. The vessels can then be ligated distal to the take-off of the left colic artery, providing additional blood supply to the colon via the IMA. This approach has been associated with a lower rate of anastomotic complications among patients undergoing low anterior resection (LAR) but may be less critical during APR [23]. However, in order to use this technique, one must first ensure that an adequate lymphadenectomy has been performed. This technique can be very useful in patients who may have issues with peripheral colonic perfusion through the usual collateral vessels.

The dissection of the mesocolon from the retroperitoneum is then continued laterally as far as possible. By completing this dissection and the vascular isolation, the plane naturally continues down to the areolar tissue between the mesorectum and the presacral fascia (Fig. 25.3). Accessing this plane is critical to preserve the autonomic nerve function, avoid excessive bleeding, and complete an oncologic TME. The lateral mobilization of the sigmoid and descending colon is then performed by gently retracting the sigmoid colon away from the retroperitoneum and incising Toldt’s fascia to meet the medial retromesocolic dissection plane. Injury to the ureter or gonadal vein or inadvertent mobilization of the perinephric fat are potential pitfalls during this step which may be avoided by careful attention to the plane of dissection. 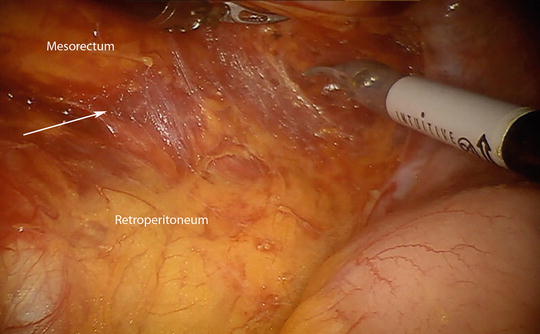 The circumferential pelvic dissection is then performed. Effective retraction of the rectum is a critical during this step. The instrument in arm 2 is used to retract the mesorectum anteriorly and laterally exposing the presacral areolar mesorectal fascial plane (Fig. 25.4). It is helpful to control the rectum by wrapping the rectosigmoid with either a gauze sponge or umbilical tape. The knot is then grasped with a locking grasper by the surgical assistant through the right upper quadrant accessory port. This enables the assistant to generate traction to pull the rectum out of the pelvis and aids in the manipulation for continued circumferential rectal dissection. The posterior and right lateral dissection is first performed using sharp electrocautery in a posterior-to-anterior manner similar to open TME. The rectum can then be retracted towards the right to complete the dissection along the left side to the level of the pelvic floor. Care should be taken to avoid inadvertent cautery injury to the pelvic parasympathetic nerve fibers along the internal iliac artery branches. A grasper through arm 3 is now brought into the pelvis to provide anterior counter-retraction of the base of the bladder, seminal vesicles, and prostate while arm 2 is used to retract the distal rectum towards the sacrum to expose Denonvillier’s fascia. The plane of dissection may be taken either anterior or posterior to Denonvillier’s depending on the location of the tumor; however the nervi erigentes course along the anterolateral aspect of this layer and are at risk for injury during this step (Fig. 25.5). 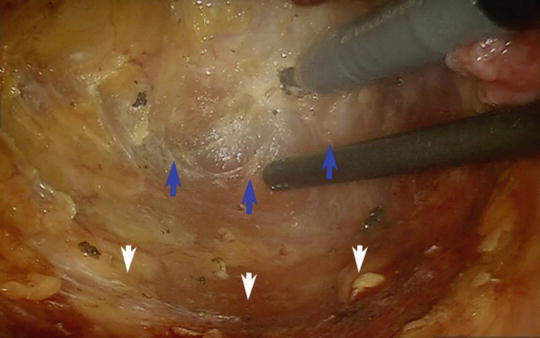 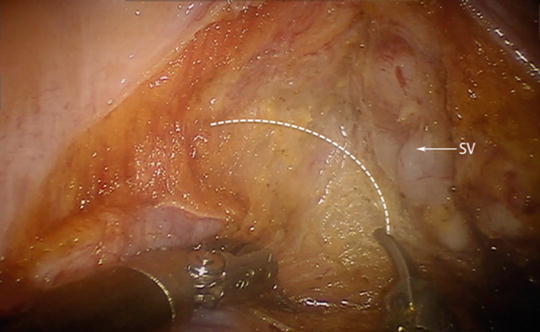 The plane of dissection with the right seminal vesicle (SV) in view. Staying within the appropriate plane (dashed line) minimizes bleeding and damage to the nervi erigentes in the lateral most aspect of the dissection

Now that the rectum has been mobilized to the pelvic floor, the levator ani muscles can be incised laterally before the distal mesorectum is mobilized to maintain a wide margin. It is important not to follow the TME plane along the pelvic floor, as this will risk a positive margin. Rather the levator ani should be incised widely away from the area of the tumor to expose the underlying ischiorectal fossa fat that marks the end of this phase of the dissection (Fig. 25.6a). Anteriorly the dissection can be taken to the level of the prostatic apex anal sphincter complex; and posteriorly the sacrococcygeal ligament can be divided with en bloc coccygectomy when indicated. At the completion of the abdominal portion of the procedure, the last step is to divide the mesocolon to the proximal sigmoid colon. Finally, the colon is divided with a linear stapler. 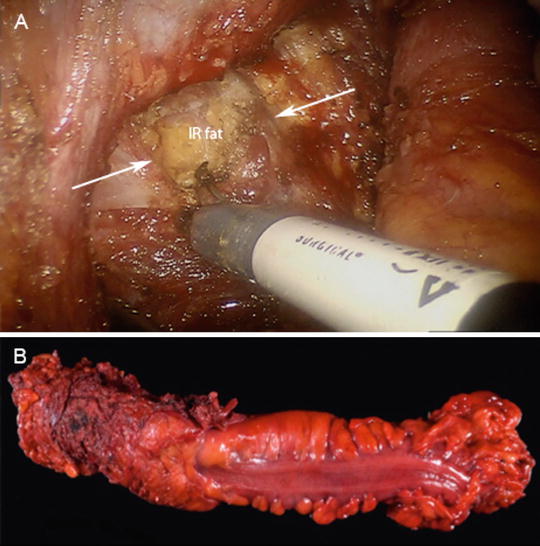 (a) Intraoperative photo showing the transabdominal division of the levator ani (white arrows) to expose the ischiorectal (IR) fat. (b) Photograph of the operative specimen showing a cylindrical resection of the pelvic floor

The perineal excision is then performed in the typical fashion by making an elliptical incision around the anus from the mid-perineal body anteriorly to a distance approximately halfway between the coccyx and the anus posteriorly. Laterally, the skin is incised to access the ischiorectal fat. With the levators incised during the abdominal approach, the pelvis is entered laterally (generally on the opposite side of the tumor) and the posterior dissection is then performed either anterior to the coccyx by dividing the anococcygeal ligament or en bloc with the coccyx after mobilizing the posterior attachments. The anterior dissection is performed last and is facilitated by dividing the anterior fibers of the levator ani to expose the posterior aspect of the prostate gland along its sides. Here, the prostate gland itself can be inadvertently mobilized placing the neurovascular bundles at risk for injury. While this dissection may also be performed in the prone position, by dividing the levator ani widely during the transabdominal approach, a cylindrical excision can be achieved minimizing the risk for a positive radial margin (Fig. 25.6b). The specimen is then extracted through the perineal wound.
The abdomen and perineal wound are copiously irrigated and hemostasis is achieved. Whenever possible, the pelvic defect should be filled with vascularized soft tissue to reduce the potential for severe complications from a pelvic abscess or perineal hernia. In a narrow pelvis, employing a pedicled omental flap is an excellent option. However, if the skin resection was large, vascularized soft tissue flaps such as gluteus or rectus muscle flaps may be utilized even with a minimally invasive approach. Given the empty space that is created, a closed suction drain serves to prevent fluid accumulation and aid in wound healing. The pelvic drain can be brought out through one of the trocar access sites and should remain in place postoperatively until the output has diminished or the perineal wound has sufficiently healed to avoid breakdown due to fluid accumulation.

To complete the procedure, the colostomy site is prepared by excising a disc of skin and dissecting down to the rectus fascia. The anterior fascia is incised and the rectus muscle fibers are separated bluntly. The posterior sheath is then incised gaining access to the peritoneum. It can be helpful to incise the posterior sheath under laparoscopic vision to facilitate creation of the ostomy site defect. The proximal colon can then be delivered through the ostomy site and matured. Proper siting of the colostomy is critical since it will be permanent and adequate pouching of the stoma is a very important part of patient satisfaction and quality of life. Patients should be marked preoperatively by an enterostomal therapist; and if appropriate, one of the robotic port sites can be placed at the colostomy site.

The postoperative management of patients following minimally invasive procedures requires the same diligence and attention to detail that are hallmarks of patient care following traditional open operations. While there is no strict dogma that governs postoperative care, there are a few important management principles that are important following all major abdominal operations. Some of the key components for patients following robotic APR include fluid management, diet, mobilization, ostomy management, and venous thromboembolism prophylaxis.
Fluid management following surgical procedures has evolved. The implementation and research into enhanced recovery after surgery has demonstrated that excessive fluid can result in prolonged hospital stay and delayed return of bowel function. It is thus important to communicate with the anesthesia team to optimize fluid management intraoperatively and this strategy is carried through the postoperative period. The type of fluids is also important and should be a balanced electrolyte solution, as opposed to isotonic saline [24]. The minimization of narcotic usage is facilitated by the minimally invasive approach.
Following robotic APR, early feeding may be initiated; typically liquids on postoperative day #1 and advancement as tolerated [24]. Like many perioperative management principles, dietary intake should be individualized based on the patient’s clinical progress. In our practice oral gastric tubes are used intraoperatively to decompress the stomach and increase the working space for robotic surgery and removed at the conclusion of the procedure.
Early mobilization is another essential part of postoperative care for patients undergoing robotic APR. Akin to other major abdominal surgeries, encouraging and enabling patients to ambulate is a major factor in accelerating the recovery from surgery and minimizing complications. Even if rotational flaps are used to assist with perineal wound closure, it is critical to begin ambulating early in the postoperative course. This will enhance recovery and increase mobility providing some protection against venous thromboembolism. In addition to ambulation, the use of pharmacologic venous thromboembolic prophylaxis with or without mechanical prophylaxis should be included.
< div class='tao-gold-member'>
Only gold members can continue reading. Log In or Register to continue