A right fifth interspace thoracotomy is performed regardless of the location of the tumor (Fig. 4.3). The en bloc dissection of the middle and lower mediastinum (first field) begins by incising the mediastinal pleura over the anterior aspect of the azygos vein from the level of the azygos arch superiorly to the aortic hiatus inferiorly. The dissection proceeds leftwards anterior to the aorta and across the mediastinum to the opposite pleura, which is entered along the entire length of the incision. The thoracic duct is thus mobilized anteriorly towards the specimen and is ligated inferiorly as it enters at the aortic hiatus and superiorly as it crosses over to the left side of the mediastinum (Fig. 4.4). All lymphatic channels are clipped or ligated between the thoracic duct and the spine to minimize the risk of a chylothorax. The arch of the azygos vein is resected en bloc with the specimen. The anterior dissection is commenced by division of the azygos vein at its caval junction and by carrying the dissection along the right main bronchus and the posterior aspect of the hilum of the right lung. The hilar and subcarinal nodes are cleared and a patch of pericardium is resected en bloc with the tumor-bearing esophagus for all but submucosal tumors (T1) of the middle and lower thirds of the esophagus. Division of the bilateral pulmonary ligaments completes the esophageal mobilization (Fig. 4.5). 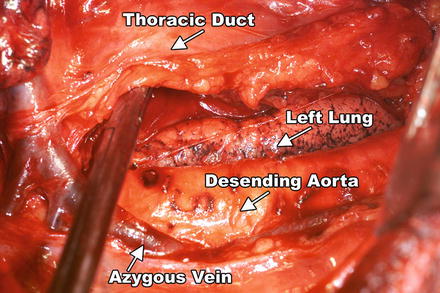 View from a right thoracotomy. Specimen with tumor-bearing esophagus is mobilized anteriorly along the descending thoracic aorta including the thoracic duct 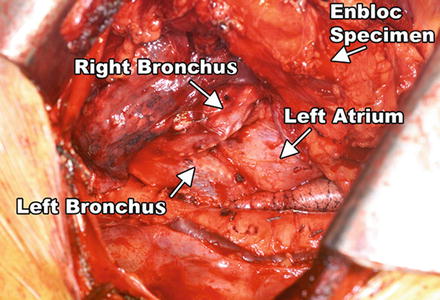 The en bloc specimen is completely mobilized, revealing the left lung, descending thoracic aorta, the tracheal bifurcation, and the pericardium
For tumors traversing the hiatus, a 1-in. cuff of diaphragm is circumferentially excised en bloc with the specimen. The completed first-field dissection clears all nodal tissue in the middle and lower mediastinum including the right and left paraesophageal, parahiatal, para-aortic, subcarinal, and bilateral hilar lymph nodes. This first-field is bounded superiorly by the tracheal bifurcation, inferiorly by the esophageal hiatus, anteriorly by the hilum of the lung and pericardium, and posteriorly by the descending thoracic aorta and the spine.
Dissection of the third field commences during the thoracic portion of the procedure and is later completed through a collar neck incision. Dissection of the superior mediastinal lymph nodes includes the nodes along the right and left recurrent laryngeal nerves throughout their mediastinal course. The left recurrent nerve is dissected using a no-touch technique and nodes along its anterior aspect are carefully excised. The right recurrent nerve is carefully exposed near its origin at the base of the right subclavian artery. The right vagus nerve serves as a good landmark in locating the right recurrent nerve. The right recurrent nodal chain begins at that level and extends through the thoracic inlet to the neck. The right recurrent nerve is dissected again using a strict no-touch technique. Through the subsequent cervical incision (Fig. 4.6), the remaining recurrent nodes are dissected along with the lower deep cervical nodes located posterior and lateral to the carotid sheath. Thus the third field comprises a continuous chain of nodes that extends from the superior mediastinum to the lower neck. These nodes may be more appropriately termed cervico-thoracic nodes rather than cervical nodes.

An upper midline incision is used to enter the abdomen (Fig. 4.6). After the omentum is separated from the colon in the avascular plane, the lesser sac is entered. The omentum is resected as a separate specimen at least 1 in. outside the gastroepiploic arcade. The short gastric vessels are divided. The retroperitoneum is then incised along the superior border of the pancreas and the retroperitoneal lymphatic and areolar tissues are swept superiorly towards the esophageal hiatus and medially along the splenic artery to the celiac trifurcation. The left gastric artery is then identified and divided flush with its celiac origin. Common hepatic artery lymph nodes are dissected and swept towards the specimen. This retroperitoneal dissection is bounded by the dissected esophageal hiatus superiorly, the hilum of the spleen laterally, and the common hepatic artery and inferior vena cava medially (Fig. 4.7). Lastly, the lesser curvature and left gastric nodes are included with the specimen when the gastric tube is prepared. 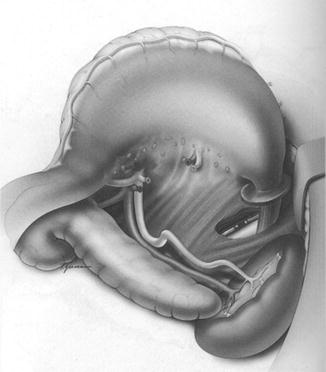 A low collar incision is performed and subplatysmal flaps are raised superiorly and inferiorly. The strap muscles are divided. The esophagus, which was previously mobilized intrathoracically, is retrieved from the prevertebral space. The esophagus is then divided distally and the specimen is retrieved in the abdomen. The previously dissected recurrent nerves are easy to visualize (especially the right recurrent) and any residual nodal tissue is excised. The nodes posterior and lateral to the carotid sheath are then removed along with the supraclavicular nodes. This is particularly important for tumors of the middle and upper thirds of the esophagus. The dissection is limited superiorly by the inferior belly of the omohyoid. Within the abdomen the gastric tube is prepared and the specimen is removed (Fig. 4.8). Gastrointestinal continuity is established by a cervical esophagogastrostomy. A feeding jejunostomy tube is placed for early postoperative enteral feeding. 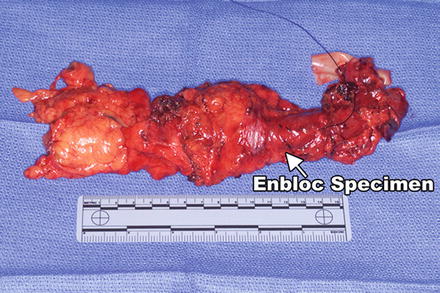 The en bloc specimen; note that the esophagus is resected within a wide envelope of surrounding tissues

In the past, all patients were cared for in an intensive care unit for 24 h for mechanical ventilation and fluid management. Currently, with improved epidural pain control and aggressive pulmonary physiotherapy, patients who undergo two-field resection are extubated in the operating room. Patients who undergo three-field resection often require 24 h of mechanical ventilation. After three-field dissection, some patients develop bronchorrhea and require more frequent pulmonary hygiene, often with repeated bronchoscopy for the first 48 h after extubation. The bronchorrhea generally resolves on the third or fourth postoperative day. Patients often have significant fluid requirement postoperatively, with spontaneous diuresis by the third postoperative day. Aggressive physical therapy is critical in getting patients out of bed and ambulating. Enteral jejunostomy feeding is started by the third or fourth postoperative day. Chest tubes are removed when drainage is less than 250 mL/day. Oral intake commences once anastomotic integrity is confirmed by a barium study on the sixth or seventh postoperative day. Patients are discharged eating a regular diet, but most require supplemental jejunostomy feeding at night. The feeding tube is usually removed 4 weeks following hospital discharge if oral intake is considered adequate.
< div class='tao-gold-member'>
Only gold members can continue reading. Log In or Register to continue