For patients with acute urinary retention, persistent or recurrent urinary tract infections, severe hemorrhage from the prostate, bladder calculi, severe symptoms unresponsive to medical therapy, and/or renal insufficiency as a result of chronic bladder outlet obstruction, transurethral resection of the prostate (TURP) or open prostatectomy is indicated. When compared with TURP, open prostatectomy offers the advantages of lower re-treatment rate and more complete removal of the prostatic adenoma under direct vision and avoids the risk of dilutional hyponatremia (the TUR syndrome) that occurs in approximately 2% of patients undergoing TURP (Mebust et al, 1989; Roos et al, 1989). Several contemporary series have demonstrated objective improvement in urinary symptoms after open prostatectomy (Tubaro et al, 2001; Gacci et al, 2003; Varkarakis et al, 2004). The disadvantages of open prostatectomy, as compared with TURP, include the need for a lower midline incision and a resultant longer hospitalization and convalescence period. There also may be an increased potential for perioperative hemorrhage (Serretta et al, 2002).

Open prostatectomy can be performed by either the retropubic or the suprapubic approach. In retropubic prostatectomy the enucleation of the hyperplastic prostatic adenoma is achieved through a direct incision of the anterior prostatic capsule. This approach to open prostatectomy was popularized by Terrence Millin, who reported the results of the procedure on 20 patients in Lancet in 1945 (Millin, 1945). The advantages of this procedure over the suprapubic approach are (1) excellent anatomic exposure of the prostate, (2) direct visualization of the prostatic adenoma during enucleation to ensure complete removal, (3) precise transection of the urethra distally to preserve urinary continence, (4) clear and immediate visualization of the prostatic fossa after enucleation to control bleeding, and (5) minimal to no surgical trauma to the urinary bladder. The disadvantage of the retropubic approach, as compared with the suprapubic prostatectomy, is that direct access to the bladder is not achieved. This may be important when one considers excising a concomitant bladder diverticulum or removing bladder calculi. The suprapubic approach also may be the preferred method when the obstructive prostatic enlargement includes a large intravesical median lobe.

Suprapubic prostatectomy, or transvesical prostatectomy, consists of the enucleation of the hyperplastic prostatic adenoma through an extraperitoneal incision of the lower anterior bladder wall. This approach to open prostatectomy was first performed by Eugene Fuller in New York in 1894; it was later popularized by Peter Freyer in London, England, who described the procedure in 1900 and later reported the results of his first 1000 patients in 1912 (Freyer, 1912). The major advantage of this suprapubic procedure over the retropubic approach is that it allows direct visualization of the bladder neck and bladder mucosa. As a result, this operation is ideally suited for patients with (1) a large median lobe protruding into the bladder, (2) a clinically significant bladder diverticulum, or (3) large bladder calculi. It also may be preferable for obese men, in whom it is difficult to gain direct access to the prostatic capsule and dorsal vein complex (Culp, 1975). The disadvantage, as compared with the retropubic approach, is that direct visualization of the apical prostatic adenoma is reduced. As a result, the apical enucleation is less precise and this factor may affect postoperative urinary continence. Furthermore, hemostasis may be more difficult because of inadequate visualization of the entire prostatic fossa after enucleation.

The indications for prostatectomy, by either open approach or transurethral resection, include (1) acute urinary retention; (2) recurrent or persistent urinary tract infections; (3) significant symptoms from bladder outlet obstruction not responsive to medical therapy; (4) recurrent gross hematuria of prostatic origin; (5) pathophysiologic changes of the kidneys, ureters, or bladder secondary to prostatic obstruction; and (6) bladder calculi secondary to obstruction.

Open prostatectomy should be considered when the obstructive tissue is estimated to weigh more than 75 g. If sizable bladder diverticula justify removal, suprapubic prostatectomy and diverticulectomy should be performed concurrently. If the prostatectomy is performed without the diverticulectomy, incomplete emptying of the bladder diverticulum and subsequent, persistent infection may occur. Large bladder calculi that are not amenable to easy transurethral fragmentation may also be removed during the open procedure. Open prostatectomy should also be considered when a patient presents with ankylosis of the hip or other orthopedic conditions that prevent proper positioning for TURP. Also, it may be wise to perform an open prostatectomy in men with recurrent or complex urethral conditions, such as urethral stricture or previous hypospadias repair, to avoid the urethral trauma associated with TURP. Finally, the association of an inguinal hernia with an enlarged prostate suggests an open procedure, because the hernia may be repaired via the same lower abdominal incision (Schlegel and Walsh, 1987; Brunocilla et al, 2005).

Contraindications to open prostatectomy include a small fibrous gland, the presence of prostate cancer, and previous prostatectomy or pelvic surgery that may obliterate access to the prostate gland.

In deciding whether to perform an open prostatectomy for symptomatic obstruction due to benign prostatic hyperplasia, it may be necessary to consider the upper and lower urinary tracts. Usually the patient will have already completed the International Prostate Symptom Score (IPSS) questionnaire and had a peak urinary flow rate determination. The postvoid residual urine volume also may have been verified with abdominal ultrasonography. A cystoscopic examination is not indicated in the routine evaluation of a patient with obstructive voiding symptoms (McConnell et al, 1994). However, cystoscopy should be performed in men with hematuria, suspected urethral stricture, and bladder calculus or diverticulum. It also can be helpful in confirming the presence of a large median lobe or in assessing the length of the prostatic urethra. For this indication it is most ideal to perform the cystoscopic examination with the patient under anesthesia just before surgery, when the pelvic floor musculature is relaxed.

Before performing an open prostatectomy the presence of prostate cancer should be excluded. All men should undergo a digital rectal examination and have a serum prostate-specific antigen determination. If the digital rectal examination detects induration or nodularity, or the serum prostate-specific antigen level is elevated, a transrectal ultrasound-guided biopsy of the prostate gland should be performed. Transrectal ultrasonography, by itself, is not indicated as a first-line diagnostic test for evaluating the prostate gland to detect early, curable prostate cancer. However, it can be useful in determining prostate size.

Before surgery the patient should undergo a complete medical evaluation consisting of a detailed history, thorough physical examination, and appropriate laboratory assessment. Most patients will be of an age with an increased risk for cardiovascular and pulmonary disease, hypertension, diabetes mellitus and other medical conditions. All abnormalities uncovered in this evaluation should be addressed. The patient’s medications should be reviewed and attention should be given to the agents such as aspirin and nonsteroidal anti-inflammatory agents that can contribute to perioperative bleeding. These medications should be discontinued and therapeutic anticoagulation reversed before surgery. In addition, a chest radiograph, electrocardiogram, routine electrolyte studies, coagulation studies, and a complete blood cell count are usually required for these patients before surgery.

Men in urinary retention should have an evaluation of renal function. If the serum creatinine value is elevated, surgery should be delayed until this parameter stabilizes. Urinalysis is performed to rule out a urinary tract infection; and, if an infection is suspected, a urine specimen should be sent for culture and sensitivity. If an infection is present, appropriate antimicrobial therapy must be instituted before surgery to prevent urinary sepsis (Serretta et al, 2002).

Historically, 3% to 10% of men undergoing an open prostatectomy will require one or more units of blood in the perioperative period (Serretta et al, 2002; Varkarakis et al, 2004; Zargooshi, 2007). Thus it may be prudent to have one or two units of blood available intraoperatively. Patients who are concerned about infectious processes associated with blood transfusion can donate one to two units of autologous blood before surgery so that it is available at the time of the procedure. The preferred autologous donation schedule is one unit per week, with the last donation 2 weeks before surgery. During this process, the patient should receive oral iron supplementation (ferrous sulfate or ferrous gluconate).

Lastly, the patient must be informed of the benefits and risks associated with open prostatectomy and written informed consent should be obtained. The benefit to be achieved is improved urination. Potential risks include urinary incontinence, erectile dysfunction, retrograde ejaculation, urinary tract infection, bladder neck contracture, urethral stricture, and the need for a blood transfusion. Other potential untoward effects include deep vein thrombosis and pulmonary embolus.

The patient is kept without oral intake after midnight and self-administers a Fleet enema the morning of surgery. The type of the anesthesia to be used and the risks associated with it are discussed and finalized with the patient and his family in conjunction with the anesthesiologist. One dose of a second-generation cephalosporin is administered before making the incision.

Proper Positioning of the Patient

Once anesthesia has been induced the patient is positioned on the operating table in a supine position. If a cystoscopic examination is to be performed, the patient is prepped and draped in the usual manner for a transurethral diagnostic procedure. Flexible cystoscopy, in this situation, will obviate major repositioning of the patient. After the cystoscopy the table is placed in a mild Trendelenburg position without extension.

Incision and Exposure of the Prostate

The suprapubic area is shaved, prepped, and draped in the usual sterile manner. A 22-Fr urethral catheter with a 30-mL balloon is passed into the bladder and connected to a sterile closed drainage system, and the balloon is inflated with 30 mL of saline. A lower midline incision from the umbilicus to the pubic symphysis is made. It is deepened through the subcutaneous tissue. The linea alba is incised, allowing the rectus abdominis muscles to be separated in the midline. The transversalis fascia is incised sharply to expose the space of Retzius. At the superior aspect of the wound the posterior rectus abdominis fascia is incised above the semicircular line to the level of the umbilicus and the peritoneum is mobilized cephalad starting at the pubic symphysis and swept anterolaterally. The pelvis is inspected for any abnormalities, and the inguinal area is examined for hernias. If a hernia is identified, it can be repaired using the preperitoneal approach described by Schlegel and Walsh (1987). A self-retaining Balfour retractor is placed in the incision and widened. A well-padded, malleable blade is connected to the retractor and used to displace the bladder posteriorly and superiorly. Unlike an anatomic radical retropubic prostatectomy, the balloon of the catheter is not positioned beneath the malleable blade. Instead it is allowed to rest at the level of the bladder neck and aids in identifying the prostatovesical junction later in the operation. The anterior surface of the bladder and prostate are exposed. With the use of DeBakey forceps and Metzenbaum scissors, the preprostatic adipose tissue is gently removed to expose the superficial branch of the dorsal vein complex and the puboprostatic ligaments (Fig. 94–1). 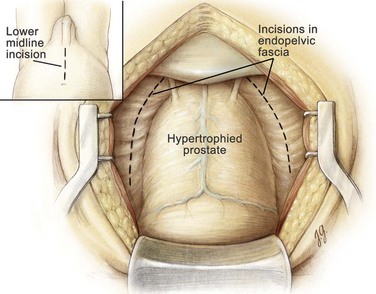 Figure 94–1 Retropubic prostatectomy. The space of Retzius has been opened and the periprostatic adipose tissue has been dissected free from the superficial branch of the dorsal vein complex. The endopelvic fascia is incised bilaterally (dotted lines), and the puboprostatic ligaments are transected bilaterally.

Before proceeding with enucleation of the prostatic adenoma it is important to achieve complete control of the dorsal vein complex as well as the lateral pedicles at the bladder neck (the main arterial blood supply to the prostate gland) (Walsh and Oesterling, 1990