Chronic pelvic pain syndromes belong to the category of visceral pain. Chronic pelvic pain is a common and debilitating problem that can significantly impair a woman’s quality of life. Patients with chronic pelvic pain are usually evaluated and treated by urologists, gynecologists, gastroenterologists, and internists. The clinical presentation is often considered to be a diagnostic dilemma, because many urologic, gastrointestinal, and gynecologic disorders appear to cause or are associated with chronic pelvic pain.1 Although these patients seek medical care because they are looking for help to alleviate their pelvic discomfort and pain, in clinical practice much emphasis has been placed on finding a specific cause and specific pathologic markers for pelvic disease. These patients typically undergo many diagnostic tests and procedures. Often, however, the examination and workup remain unrevealing and no specific cause of the pain can be identified. In these cases, it is important to recognize that pain is not only a symptom of pelvic disease, but that the patient is suffering from a chronic pelvic pain syndrome, in which “pain” is the prominent symptom of the chronic visceral pain syndrome.2,3

The purpose of this chapter is to review the pathophysiology of chronic nonmalignant pelvic pain, a chronic visceral pain syndrome. Because of the anatomic location of the viscera, they do not lend themselves easily to experimental manipulation, but recognition of the existence of the chronic pelvic pain syndromes has resulted in the development of novel animal models to study the pathophysiologic mechanisms of chronic pelvic pain4 and of clinical studies to assess pain treatment options. Knowledge of the neurophysiologic characteristics of visceral pain will guide the physician in making a diagnosis of chronic pelvic pain and in sorting it out from the lump diagnosis of idiopathic pain.3 A basic understanding of the neurobiology is paramount to gain further insights into the mechanisms of the pelvic pain disorders and contributes greatly to the development of effective clinical management strategies for patients presenting with these syndromes.

DEFINITIONS: WHAT IS CHRONIC PELVIC PAIN?

Pain is defined by the International Association for the Study of Pain (IASP) as an unpleasant sensory and emotional experience associated with actual or potential tissue damage, or is described in terms of such damage.6 There is no generally accepted definition of chronic pelvic pain. The IASP defines chronic pelvic pain without obvious pathology as chronic or recurrent pelvic pain that apparently has a gynecologic origin but for which no definitive lesion or cause is found.6 This definition is problematic from a clinical perspective, because it implies absence of pathology, which might not necessarily be the case (for example, many patients with endometriosis suffer from pelvic pain). It also excludes cases in which pathology is present but not necessarily the cause of pain (for example, some patients with endometriosis do not have pelvic pain). As in many other pain conditions, the relationship of the pain complaint to the presence of pathology is often unclear in patients with chronic pelvic pain. The proportion of women with chronic pelvic pain and a specific diagnosis (or diagnoses) varies greatly in the literature. A large primary care study from Great Britain found that diagnoses related to urinary and gastrointestinal tracts are more common than gynecologic causes (30.8% urinary, 37.7% gastrointestinal, 20.2% gynecologic). Further, 25% to 50% of women with chronic pelvic pain who received medical care in primary care practices had more than one diagnosis.7,8

Several medical societies have recently published consensus statements revising definitions of chronic pelvic pain. The International Continence Society has defined “pelvic pain syndrome” as the occurrence of persistent or recurrent episodic pelvic pain associated with symptoms suggestive of lower urinary tract, sexual, bowel, or gynecologic dysfunction in the absence of proven infection or other obvious pathology.9 The European Association of Urology suggested extending this definition by considering two subgroups based on the presence or absence of well-defined conditions that produce pain.10 In the gynecologic literature, chronic pelvic pain is often referred to as pelvic pain in the same location for at least 6 months. The American College of Obstetricians and Gynecologists has proposed the following definition: chronic pelvic pain is noncyclic pelvic pain of 6 or more months’ duration that localizes to the anatomic pelvis, anterior abdominal wall at or below the umbilicus, the lumbosacral back, or the buttocks and is of sufficient severity to cause functional disability or lead to medical care. A lack of physical findings does not negate the significance of a patient’s pain, and normal examination results do no preclude the possibility of finding pelvic pathology.1 Definitions of chronic pelvic pain will probably continue to be revised, as knowledge about the pathophysiology of pelvic pain is increasing based on basic science and clinical research. When reviewing literature on chronic pelvic pain, it is crucial for the reader to realize which definition of chronic pelvic was actually used for the study.

NEUROANATOMY OF THE PELVIS

The purpose of this section is to provide an overview of the innervation of the pelvis and urogenital floor.13,14 Although this summary attempts to derive as much information as possible from investigations involving humans, it is important to note that some generalizations are necessarily taken from animal studies, recognizing that much research in this field is still in its infancy.

All viscera, including the pelvic visceral organs, are dually innervated by both divisions of the autonomic nervous system, the sympathetic and parasympathetic divisions, as well as by the somatic and sensory nervous systems. In a broad anatomic view, dual projections from the thoracolumbar and sacral segments of the spinal cord carry out this innervation, converging primarily into discrete peripheral neuronal plexuses before distributing nerve fibers throughout the pelvis (Fig. 89-1). Interactive neuronal pathways routing from higher origins in the brain through the spinal cord add to the complexity of neuronal regulation in the pelvis. Although it is important to appreciate the influence of supraspinal centers in the coordination of pelvic organ activities, it is beyond the scope of this section to discuss these interactions in further detail; for review, see Bors and Comarr,15 Morrison,16 de Groat et al,17 de Groat,18 and Berkley and Hubscher.19 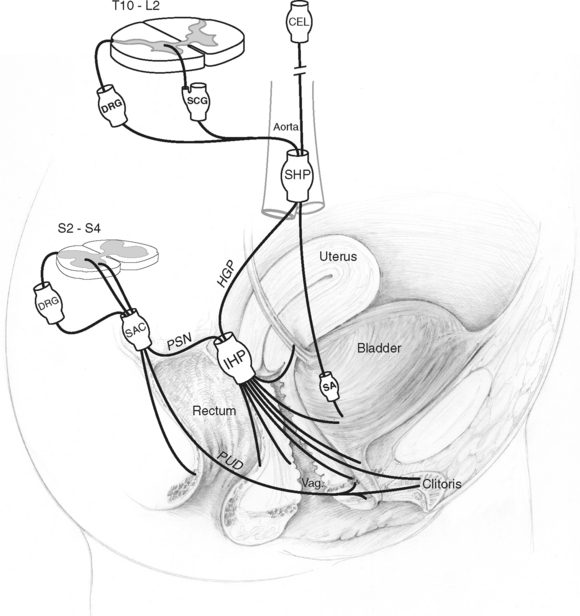 (From Wesselmann U, Burnett AL, Heinberg LJ: The urogenital and rectal pain syndromes. Pain 73:269-294, 1997. With permission of the International Association for the Study of Pain.)

The autonomic innervation of the female genitalia has been less well studied than the male counterpart. It involves inferior hypogastric plexus projections deriving primarily from the paracervical ganglia part of the plexus. Conspicuous nerve trunks run in the adventitia of the vagina parallel to its long axis, sending off anterior branches that course to the clitoris and periurethral tissues and local branches that enter the vaginal smooth muscle walls.22,34 A network of nerve fibers tends to follow vascular distributions and conspicuously terminates at the junction between the subepithelial connective tissue and the vaginal epithelium as well as within the epithelium.34 Nerve density is observed to be greater in the distal vagina than in the proximal regions.34