Flow diagram of patients with borderline resectable pancreatic ductal adenocarcinoma (BR-PDAC) obtained from questionnaires administered to attendees of the 37th annual meeting of the Japanese Society of Pancreatic Surgery (JSPS) in 2010. Patients had radiographic findings suggestive of vascular involvement limited to the PV (portal vein) alone (BR-PV), or to the HA (hepatic artery), SMA (superior mesenteric artery) and/or CA (celiac artery) with or without PV (BR-A)

(a) Kaplan–Meier survival curve of 673 patients with borderline resectable pancreatic ductal adenocarcinoma (BR-PDAC). The 3- and 5-year survival rates in total 673 patients were 15.9 % and 9.7 %, respectively. (b) Kaplan–Meier survival curves plotted for patient groups according to radiographic findings. Patients had radiographic findings suggestive of vascular involvement limited to the PV (portal vein) alone (BR-PV), or to the HA (hepatic artery), SMA (superior mesenteric artery) and/or CA (celiac artery) with or without PV (BR-A). The 3- and 5-year survival rates of BR-PV cases (n = 356) were significantly better than those of BR-A cases (n = 317): 21.1 % and 14.3 % vs. 10.0 % and 4.7 %, respectively (p = 0.001). MST median survival time 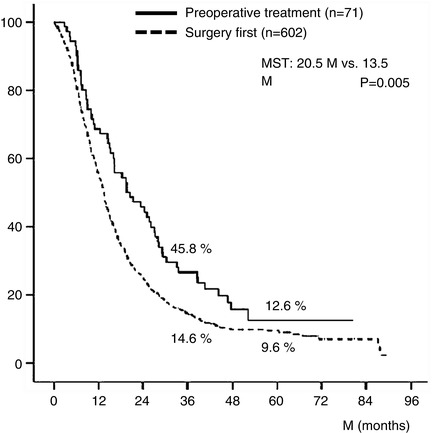 Preoperative Chemoradiotherapy at Our Institution

In an attempt to increase the R0 resection rate of patients with locally advanced PDAC, our institution has used preoperative gemcitabine-based chemoradiation therapy (GEM-CRT ) since February 2005 [5–7]. Although the benefits of preoperative CRT in this clinical scenario have been suggested by others [8–10], the extent to which histopathologic response to CRT is associated with survival in this setting has historically been unclear. We therefore explored the relationship between histopathologic response (as determined by evaluation of UICC-T3 and T4 PDAC tumors resected following GEM-CRT) and prognosis and found that in T3 tumors, histological response was a significant prognostic indicator, whereas in T4 tumors, GEM-CRT did not lead to a beneficial histological response [5]. Furthermore, we examined the relationship between the intratumoral expression of human equilibrative nucleoside transporter (hENT1, the main GEM transporter into cells) in the resected specimens and the outcome of GEM-CRT in patients with T3 and T4 PDAC [6]. We showed that the hENT1 expression in PDAC cells was strongly associated with the outcome of preoperative GEM-CRT treatment, suggesting that this biomarker might represent a useful predictor of the effect of gemcitabine-based therapies. From these studies, we concluded that GEM-CRT, even when used for patients with advanced PDAC, allowed for the identification of candidates for aggressive resection at the time of reassessment, facilitated an increase in the R0 resection rate, and improved the prognosis of patients with positive hENT1 expression [7].
Our treatment protocol for preoperative GEM-CRT was used to treat 124 PDAC patients from February 2005 to October 2011, and thereafter we switched our protocol to S-1/GEM-based CRT (S-1/GEM-CRT) which was used to treat 96 patients from November 2011 to September 2014 (Fig. 17.6). Although we initially referred to our protocol as neoadjuvant or preoperative CRT [5, 6], we subsequently adopted the term “CRT followed by surgery (CRT-S)” because approximately half of the patients registered in the protocol were staged as having unresectable PDAC—for these patients, the term “preoperative treatment” was not appropriate [7]. S-1 is an oral agent that contains tegafur, gimeracil, and oteracil [11], and the agent appears at least equivalent to or even more active than 5-FU when combined with radiotherapy for locally advanced PDAC [12, 13]. Recently, a randomized phase III study of GEM plus S-1, S-1 alone, or GEM alone in patients with locally advanced and metastatic PDAC (GEST Study) showed that monotherapy with S-1 demonstrated noninferiority to GEM in overall survival with good tolerability and that GEM plus S-1 significantly improved progression-free survival as compared with GEM [14].