Surgical Approach to Borderline Resectable Tumors of the Left Pancreas

Lymphatic drainage. of the left pancreas. The ring of nodes consists of the lymph nodes located at the superior and inferior border of the pancreas as well as the gastrosplenic, splenic, gastroduodenal, and infrapancreatic nodes. The celiac and superior mesenteric lymph nodes may also receive direct drainage without having received drainage from any of the ring nodes. Therefore, they are oncologically important in resection of cancers of the left pancreas. (Reproduced with permission from [1])

The operation generally commences with a staging laparoscopy to evaluate for obvious metastatic disease on the liver surface or peritoneum. Identification of such metastatic disease would obviate the need to resect the cancer. Assuming that the patient is free of metastatic disease on staging laparoscopy, the abdomen can be entered in one of two ways. A midline incision is perhaps the easiest method of entry and provides adequate exposure in the majority of patients. Occasionally a “Mercedes Benz” incision is required. This entails a left subcostal incision that is extended to the right subcostal region with the addition of a vertical incision at the midline. Having entered the abdomen, the peritoneal cavity is once again explored for obvious metastatic disease. Particular attention is paid to the root of the mesentery as seen when elevating the transverse colon toward the patient’s head.
The lesser sac is entered by taking the greater omentum off of the colon. This involves division of the avascular embryologic fusion plane between the greater omentum and the transverse colon. Alternatively, the lesser sac can be entered by simply dividing the greater omentum just outside of the gastroepiploic arcade preserving blood flow to the greater curvature of the stomach. The short gastric vessels will require division and this can be fully accomplished at this stage of the operation or completed with mobilization of the spleen. The RAMPS procedure then starts with early division of the neck of the pancreas. This is performed by first identifying the SMV at the inferior border of the pancreas with or without division of the right gastroepiploic vein but taking care not to injure the middle colic vein if possible. Before the anterior portal vein is identified a wide Kocher maneuver is performed and the hepatic flexure is taken down in an effort to expose the anterior IVC and the proximal left renal vein. This structure will serve as the starting point of the posterior extent of the resection plane. The anterior surface of the portal vein is now identified at the superior border of the pancreas by rightward retraction of the gastroduodenal artery after having mobilized the lymph nodes along the left side of the proper hepatic artery and portal vein as well as the lymph nodes associated with the common hepatic artery. The anterior surface of the portal vein is then found in the space just to the left of the GDA and inferior to the common hepatic artery. The retropancreatic tunnel is developed at this point and the pancreatic neck is divided. The pancreas is typically stapled with mesh, as this has shown promising results in significantly decreasing the rate of pancreatic occlusion failure in our single institution study [3]. Early division of the pancreatic neck is in stark contrast to the more traditional retrograde method where the pancreatic neck is divided lastly. However, this maneuver is important in the RAMPS procedure because it allows for an adequate celiac lymph node dissection, which is necessary if all N1 nodes are to be removed.
The celiac lymph node dissection is performed next after having divided the neck of the pancreas. As the fat and lymph nodes anterior to the common hepatic artery are dissected and carried medially, the celiac trunk will come into view. The left gastric artery is identified and its associated lymph nodes are swept inferiorly as the origin of the splenic artery is approached. Note that the left gastric artery can be sacrificed making the celiac lymph node dissection easier; however, this is certainly contraindicated in the presence of a replaced left hepatic artery arising from the left gastric artery. Once the origin of the splenic artery is identified, it is divided and ligated. Following this, the splenic vein is circumferentially dissected, divided, and ligated. Although it is ideal from a splenic congestion standpoint to divide the splenic artery before taking the vein, occasionally, patient anatomy will dictate that it is technically easier to divide the splenic vein before the artery.
Having completed the celiac lymph node dissection, attention is now turned towards clearing lymphatic tissue from the left side of the SMA as well as the small span of anterior aorta located between the celiac trunk and SMA. This is accomplished by orienting the plane of dissection sagittally towards the patient’s spine with the goal of being able to visualize the origins of both the celiac trunk and SMA from the left side of the aorta.
The conduct of the final portion of the RAMPS procedure is dictated by the cancer’s proximity to the left adrenal gland and determined preoperatively based on imaging. The more commonly indicated anterior RAMPS procedure is done for tumors that are medially located where there is no involvement with the left adrenal gland. However, should the tumor’s location be lateral and abutting the left adrenal gland it is prudent to proceed with a posterior RAMPS procedure (see Fig. 19.2).

Planes of posterior margin and direction of dissection in the different types of left pancreatectomies including the two RAMPS procedures. A left adrenal gland, D duodenum, K left kidney, P pancreas, SF splenic flexure of colon. (Reproduced with permission from [4])
Anterior RAMPS : The previously identified left renal vein is identified and becomes the posterior plane of dissection at the most medial extent of the specimen. The final extirpation now proceeds in a medial to lateral fashion (i.e., antegrade). The left adrenal vein is next identified and the dissection stays just anterior to its surface as well as the left adrenal gland itself. As the dissection proceeds more laterally, the peritoneum at the superior and inferior borders of the pancreas are freed. This entails division and ligation of the inferior mesenteric vein. Posteriorly, the anterior renal fascia is generally removed from the superior pole of the kidney as the pancreas is elevated out of the retroperitoneum. After division of the lienorenal attachments, the specimen is removed from the abdomen (see Fig. 19.3).

(a) Drawing of the operative field at the conclusion of an anterior RAMPS procedure. (a) Portal vein, (b) superior mesenteric vein, (c) stump of the splenic vein, (d) celiac artery, (e) common hepatic artery, (f) stump of the splenic artery, (g) stump of the left gastric artery, (h) gastroduodenal artery, (j) superior mesenteric artery, (k) left renal vein, (m) left adrenal vein. (b) Labelled intraoperative photograph at the conclusion of an anterior RAMPS procedure. (Both figures reproduced with permission from [1])
Posterior RAMPS : The dissection is carried down the left side of the aorta onto the diaphragm. The left renal vein forms the inferior border of the dissection at the medial extent of the specimen. This is similar to the previously described anterior RAMPS. However, as the dissection proceeds antegrade, the correct plane lies posterior to the adrenal gland on the retroperitoneal muscle layer. This step involves ligation and division of the left adrenal vein so that the adrenal gland can be removed with the specimen. The attachments at the superior and inferior borders of the pancreas are divided as well as the IMV, just as in the anterior RAMPS. Also, the anterior renal fascia is always taken in a posterior RAMPS procedure as the pancreas is mobilized laterally. Therefore, the final specimen will include the left pancreas, left adrenal gland, and spleen en bloc (see Fig. 19.4). 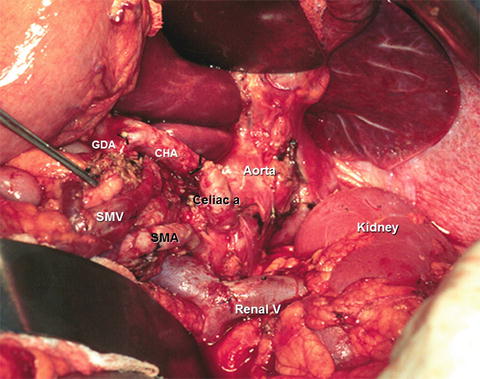 Labelled intraoperative photograph at the conclusion of a posterior RAMPS procedure. (Reproduced with permission from [1])
Left pancreas cancers can grow to large sizes before their detection and thus may present with local invasion into surrounding structures other than the left adrenal gland. Those structures may include the stomach, left kidney, transverse mesocolon, colon, duodenum, and diaphragm. Local invasion of any of these structures does not preclude resection of the cancer as long as the involved structures can be completely removed en bloc with the specimen using standard resection techniques. Occasionally, it may be necessary to extend the left pancreatectomy to the right depending on the actual location of the mass. This is particularly true if there is invasion of the portal vein/superior mesenteric vein, where venous reconstruction may be necessary to completely extirpate the tumor. Figure 19.5 depicts a CT scan of a patient with venous involvement from a left-sided pancreas cancer where this technique may be necessary. It should be noted that while venous resection/reconstruction is generally accepted for complete extirpation of pancreatic cancer, similar consensus does not exist if SMA reconstruction is necessary to achieve negative margins. SMA resection has been found to increase morbidity and negatively impact survival [5]. 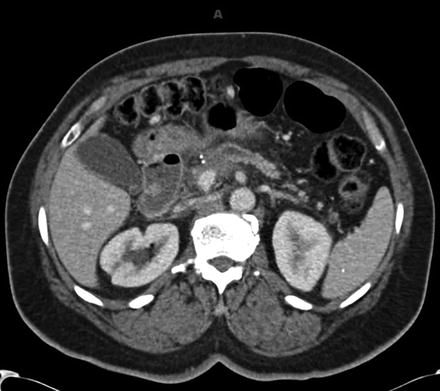