Structure of the Bulbo-clitoral Organ

The description of structures referred to as “clitoral” represents a true semantic problem. When referring to the anatomical nomenclature, the old nomenclature or the recent international nomenclature, the clitoris and the vestibular bulbs are described separately.
When considering anatomic facts, i.e. what is observed and what is revealed through dissection, the clitoris and vestibular bulbs are closely related and form a single entity, specific to the external female genital apparatus. However, difficulties arise in relation to the name of this entity.
O’Connell H.E. et al. solved the problem by referring to the two above-mentioned structures with a single term: the clitoris. However, if this is true from an anatomical observation viewpoint, it is inaccurate from a terminological viewpoint.1
The question becomes even more complicated when considering the glans, which is qualified (as is customary) by the adjective clitoral (due to the fact that, from a topographical viewpoint, it represents the free and exteriorised part of the clitoris), while, at the same time, it is embryologically derived, for its major part, from the primitive corpus spongiosum.
In order to solve all these difficulties, we propose to call this complex unit, derived from the female embryonic genital tubercle, the “bulbo–clitoral organ”.2 This unit was referred to by Testut et al. in their famous book on Anatomy, which has been published many times, as erectile organs of the vulva, which Köbelt had referred to by using a holistic term: genital sense’s apparatus in female.3
The bulbo-clitoral organ, such as it has always been observed, includes:

This organ resembles a dihedron (Fig. 5.3) whose top edge comprises a slanted extension directed downwards and backwards. This dihedron caps a truncated urogenital pyramid consisting of the vaginal canal surmounted by the urethra. Overall, through dissections, the considerable significance of the buried parts of this bulbo-clitoral organ is rapidly observed. The vision of the glans clitoridis, alone free and visible part of the clitoris, only provides a minimalist overview of the said apparatus.
While the architecture of the bulbo-clitoral organ is constant, this is not the case for its global morphological aspect and a significant range of various aspects can be encountered, not only due to the various lengths, thicknesses and shapes of its components but also due to the variety of connection angles of these same components. At first sight, as soon as an anatomical sample has been collected and even after the most careful dissection of this specimen, the bulbo-clitoral organ has a massive aspect, which is always astonishing, and sometimes even a little monstrous (Fig. 5.1). 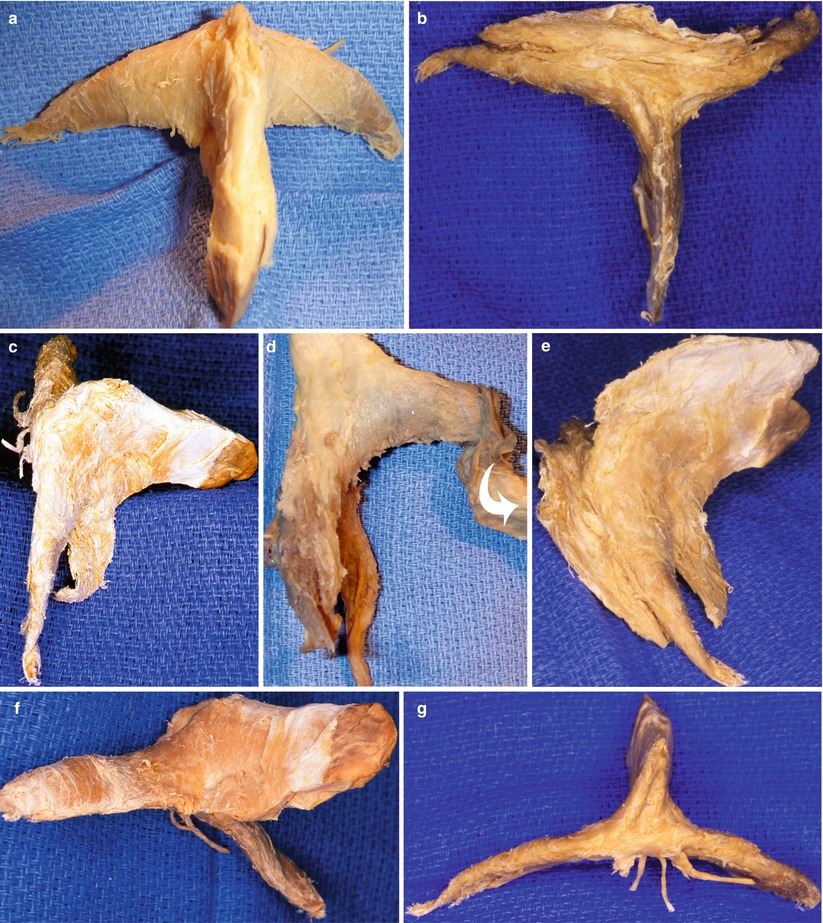 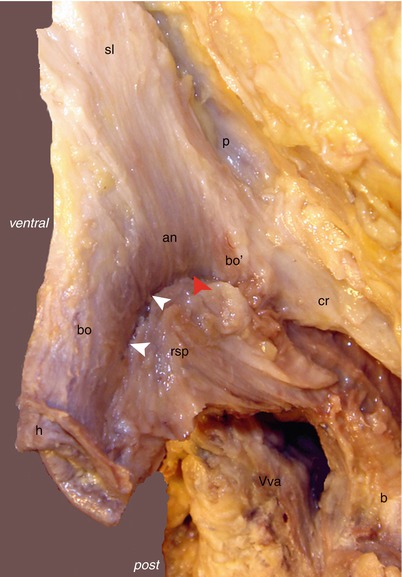 Lateral aspect of a dissection showing the structure of the bulbo-clitoral organ. bo body of the clitoris, descending part, bo′ body of the clitoris, ascending part, cr crus clitoridis, anangle (or elbow) of the clitoral body, h hood, p pubis, rsp residual spongy part, Vva vaginal vestibule. Arrowheads: They show the area of the intermediate network of Köbelt. Note: The red arrowhead indicates the part where this network’s communications are the most dense: between the commissura bulborum and the angle of clitoral body

They are the crura and body of the clitoris.

The crura clitoridis (international nomenclature), or pillars or roots, are the two cavernous structures, shaped as a long cornet, attached, via the ischiocavernosus muscles, to the ischio-pubic rami of the two coxal bones, which will meet frontwards and from within to form the body of the clitoris (Fig. 5.3). These crura are located at the anterior perineum in the superficial perineal region,4 in contact with the lateral edges of the subpubic angle. In order to reach them, it is necessary to cross the superficial fascia of the perineum, to almost completely free the labial fatty body,5 contained in the labia majora6 and to push this formation towards the ventral surface of the pubis. 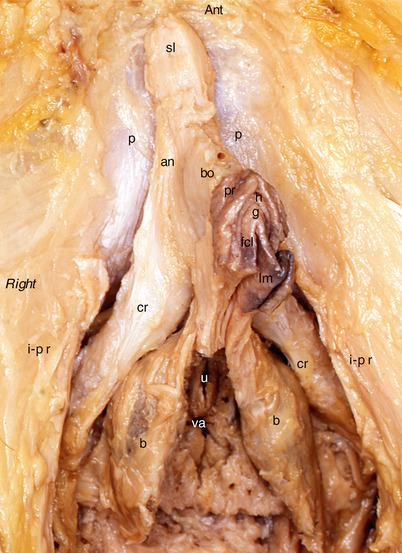 Dissection of the urogenital female perineum showing the bulbo-clitoral organ in situ. an angle (or elbow of the clitoral body), b bulb (spongiosus), bo body of clitoris, cr crus clitoridis, fcl frenum (frenulum clitoridis), g glans clitoridis, h hood, i–p r ischio-pubic ramus, lm labium minus (lesser lip), p pubis (anterior surface), pr prepuce, sl suspensory ligament, u external urethral orifice, va vaginal orifice (introïtus). The photography is taken in slightly ¾ right, in order to see the clitoral body
When the crura are still in place and not detached from their insertions, it is all the more difficult to apprehend their shape as they are hidden by the muscle fibres of the ischiocavernosus muscles, which are pushed against their lower and medial parts. Moreover, these crura are attached to the internal surfaces of the ischio-pubic rami. The lower edges of these rami partially hide the crura. Overall, it is actually only possible to study the crura when they have been released from their attachments and therefore only parts analysed ex situ (Fig. 5.4). There exists a right-left symmetry but when the two crura are examined on the sampled parts, a few discrete variations in length, thickness and sometimes, morphology, are observed. Each crus is initially tapered (top of the cone) and becomes gradually wider to reach its maximum diameter in front of the distal part of the ventral surface of the pubis, before joining the opposite crus on the centre line, in front of the pubic symphysis. The crura of the corpora cavernosa, with the ischiocavernosus muscles which cover them (which themselves are sheathed in their envelope fascia), make up structures solidly attached to the lateral edges of the pelvic outlet via bone and fibrous attachments. The bone insertions are located on the middle part of the internal surface of the ischio-pubic ramus, under the sickle-shaped crest7 and slightly above the lower edge of the bone. The fibrous insertions are located on the juxta-bone part of the lower fascia of the urogenital diaphragm (perineal membrane). At this level, the fascia clearly becomes thicker. We propose to call this thickening “attaching lamina of the corpora cavernosa”. 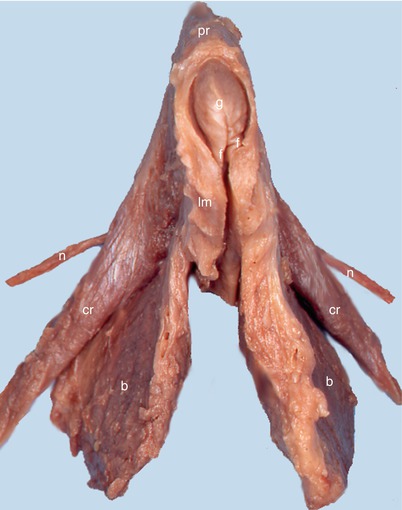 Dissection of a bulbo-clitoral organ showing the relationships between the different components (ventral view of an ex situ dissection). b bulb (spongiosus), cr crus clitoridis, f frenum (frenulum clitoridis), g glans clitoridis, lm basis of the labium minus, n dorsal nerve of clitoris, pr prepuce
The dimensions of the crura vary, we have already observed this! In our research, the average length of the crura (measured up to the level where the joining between the left and right crura starts) is of 37 mm (30 to 35 mm for L. Testut, 30 mm for P. Kamina). The average diameter (measured at mid-length of the crus) is of 9 mm for the parts which we have measured.
The structure of the crura is simple: a thick fibro-elastic or albuginea envelope, surrounding and protecting the cavernous tissue. It is the albuginea one, which provides the crus with its firm consistency. Each crus receives a feeding artery, a branch of the superficial perineal artery.
The two crura have a prepubic converging direction and their axes determine, between them, a connection angle, shaped as a reversed V, of variable amplitude, of 85° on average (extreme angles: 50 and 95 degrees)8 with, from an architectural viewpoint, a relatively ogival disposition. This connection is not a unitive convergence such as seems initially apparent. By examining the back of the sampled parts, the impression is given that there is a triangular commissure (Fig. 5.5), which merges together the terminal portion of the two crura. Actually, the dissection and sections (Fig. 5.6) are used to affirm that there is no fusion of the initial crura into a single corporeal element. There is no coalescence or fusion but only a joining of the two pillars, which will merge to form a single corporeal cylinder. As for the pseudo-commissure of the pillars, which it is better to call retro-crural fascia (old “ligament of the inter-thigh”), it is only formed by a single dense fibrous layer, which merges more or less with the fibrous coating, which coats the ventral surface of the pubic symphysis and from which it can be detached to unstick the clitoris from the symphysis and slightly rotate it backwards and downwards. This pseudo-commissure (Figs. 5.5, 5.7 and 5.8) covers a trapezoidal or triangular surface (isosceles or equilateral triangle), of variable height (between 1.3 cm and 2 cm). The base of the commissural triangle borders the lower edge of the pubic symphysis. This fibrous structure is not only a unitive collagen lamina coating the dorsal surfaces of the crura. It is an actual protective tunic whose major role is to cover the nerves and vessels, before they reach the cavernous structures. This fascia delimits a loose conjunctive region, the retro-crural space (Fig. 5.9), inside which are routed small arteries, veinlets, nerve rami with, at their contact, many Pacini’s corpuscles. In this region, a median fibrous partition (aligned on the median septum of the clitoral body), separating the right and left vasculo-nervous contingents, is often observed. 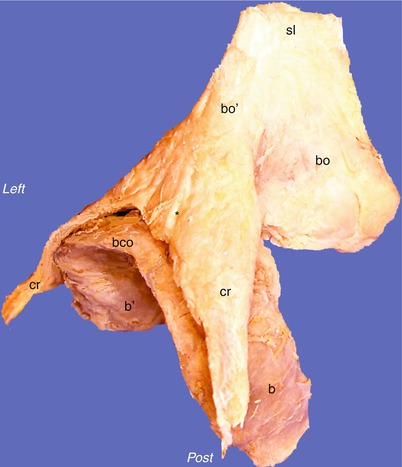 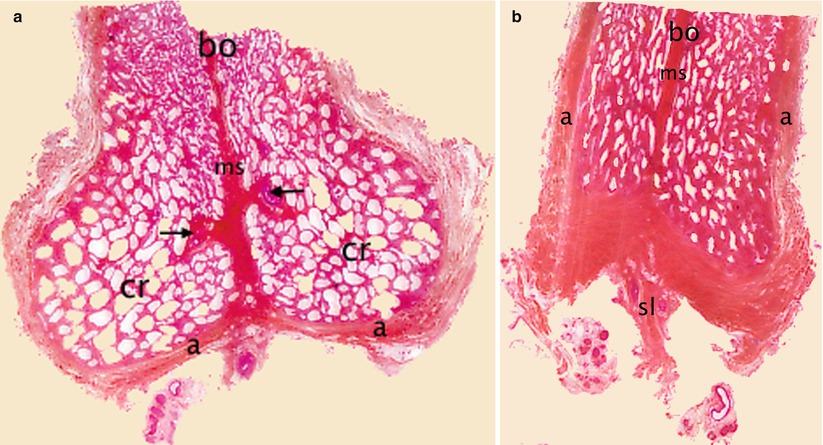 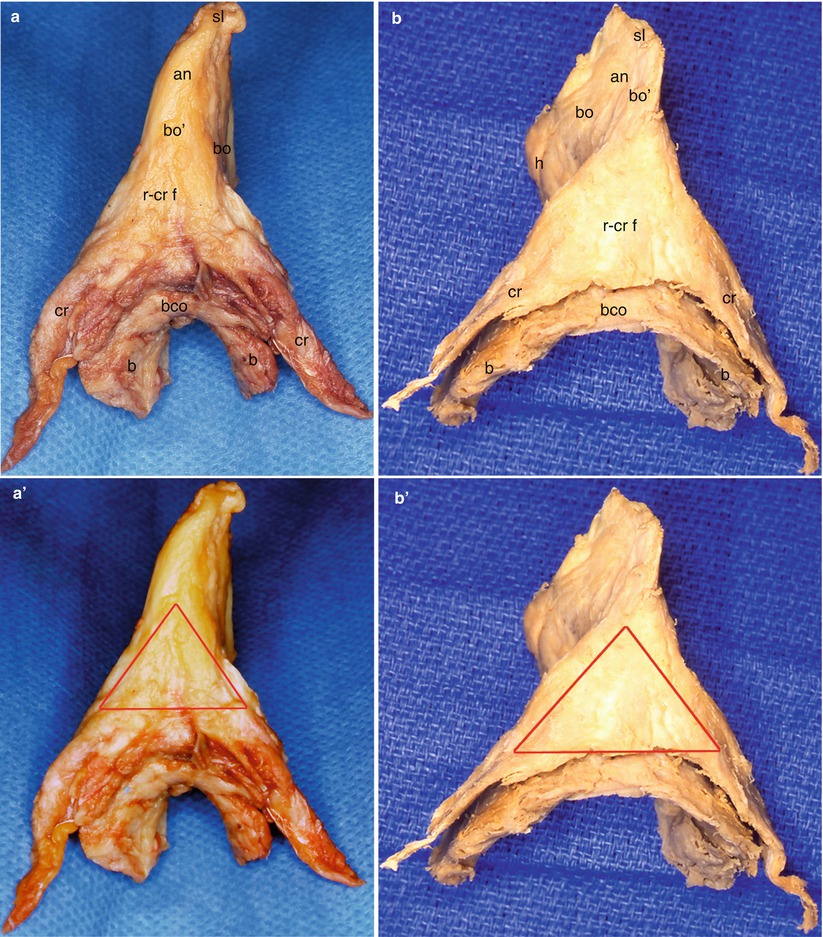 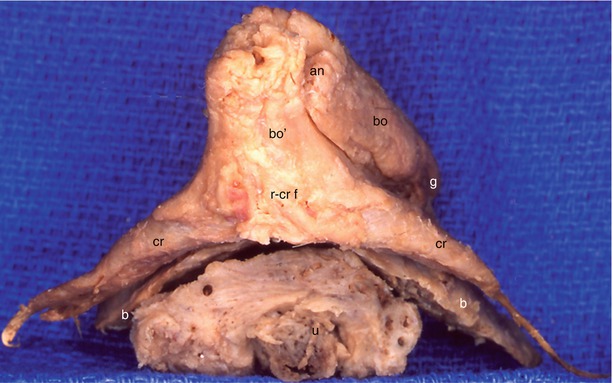 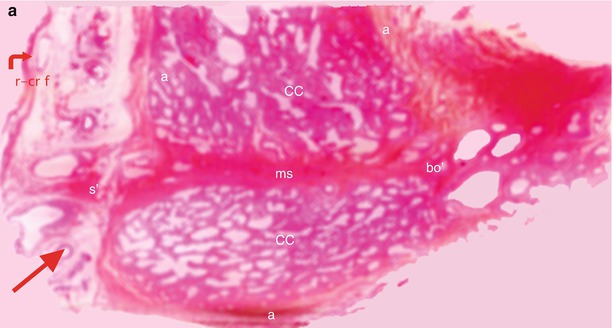 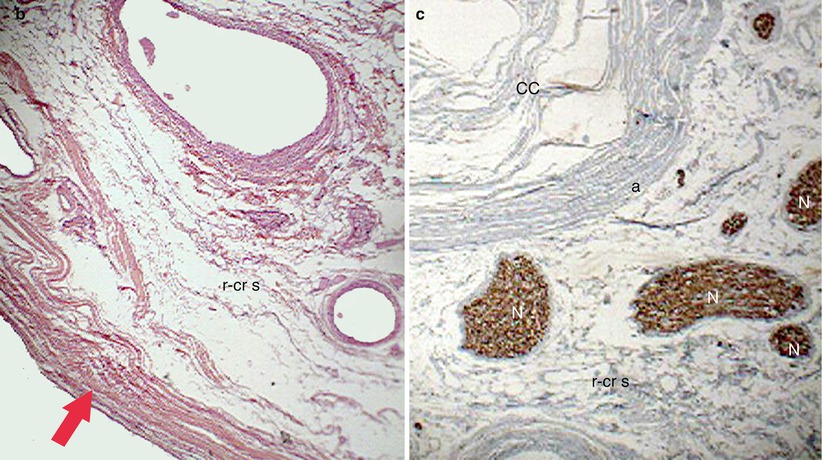 Such as we have just observed, it is the joining of the two crura which will form the body of the clitoris. At the start, this body continues the direction of the crura, in front of the pubic symphysis. It then has a large diameter, representing the sum of the diameters of each clitoral crus. The joining of the medial surfaces of the two albugineae (Fig. 5.10) creates a true fibrous partition: the septum of the crura (pectiniform partition of Testut), which will extend into the corporeal clitoral cylinder, by the median septum. When it reaches mid-height of the ventral symphysis surface, the body of the clitoris will suddenly change directions and leave the bone plane and protrude downwards and backwards into a sagittal plane. This change of direction and plane corresponds to the angle or elbow of the clitoris. This elbow therefore belongs to the clitoris body, which it separates into two segments: a short segment, against the pubis, and a long segment, arranged on a sagittal plane, perpendicular to the symphysis plane. The entire body of the clitoris thus has, via lateral vision, a bent aspect, with a high convexity (Fig. 5.5), which sometimes recalls a sort of bump.

Tags: Anatomic Study of the Clitoris and the Bulbo-Clitoral Organ
Mar 29, 2017 | Posted by admin in UROLOGY | Comments Off on Structure of the Bulbo-clitoral Organ
Premium Wordpress Themes by UFO Themes
WordPress theme by UFO themes