Formation of the Clitoris

The initial situation can be considered by examining the caudal end of the embryo on the 34th day of the development2 (Fig. 2.1). This end is occupied by a cavity, the cloacal cavity or cloaca, covered by an entoblastic embryonic layer.3 This cloaca is closed at its end by a didermic membrane, i.e. with double layer (endoderm lined with ectoderm), the cloacal membrane.

Median sagittal section of the pelvic region (drawing of a micrograph female human fœtus; 34th day of development) (The ectoblast is drawn in blue (a amnios, e epiblast, NT neurectoblaste of the neural tube). The mesoblast is drawn in red. The entoblast is drawn in yellow). D dorsal, V ventral, Cl cloaca, Cl a cloacal appendix, Cl M cloacal membrane, Cl t cloacal tubercle, NT neural tube (sc spinal cord), per peritoneum, R′ future rectum, ugS′ future urogenital sinus, urRs urorectal septum (eperon perineal of French anatomists), oblique white arrow it shows the direction of urRs′ progress towards the cloacal membrane, white arrowhead it indicates the point where the epiblast follows the amnios (which covers the umbilical cord)
On the ventral surface of the caudal end, a growth can be observed: the cloacal tubercle consisting of mesoderm covered by ectoderm.
The development in the caudal direction of the partition initially separating the primitive intestine and the allantois, the urorectal fold (which itself consists of mesenchyme coated with endoderm), will divide the cloaca, in its cranial two-third, into two ducts: a ventral duct (the urogenital sinus) and a dorsal duct (the posterior intestine). The embryologists still refer to this fold as the “fold of Tourneux”.4 The cloacal tubercle is at the front of the urogenital sinus. The cranial half of this tubercle will become the infra-umbilical anterior abdominal wall (pelvic wall). As for its caudal half, it will be the site of complex phenomena leading to the formation of the urogenital sinus: it will be colonised by a budding of the ventral endodermal wall of the cloaca, the cloacal entoblastic plate, (“cloacal entoblastic lamina of Solère” for French authors). This lamina progresses towards the top of the cloacal tubercle, which it reaches around the 36th day of development (Fig. 2.2). 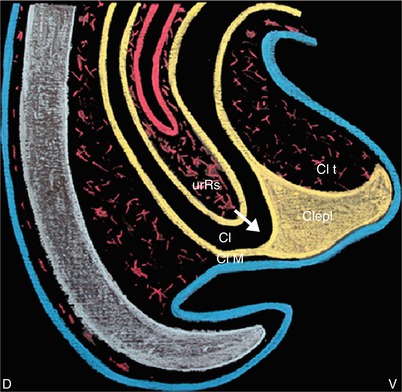 Median sagittal section of the pelvic region (drawing of a micrograph female human fœtus; 36th day of development). Cl cloaca, Clepl cloacal entoblastic plate (lame entoblastique cloacale of French authors), Cl M cloacal membrane, Cl t cloacal tubercle, urRs urorectal septum, oblique white arrow it shows the direction of urRs′ progress towards the cloacal membrane
As of the 37th day (Fig. 2.3), apoptosis phenomena will occur within the cloacal entoblastic plate towards the top of the cloacal tubercle, with formation of vacuoles whose convergence will perform of a sort of tunnelling process. This hollowing phenomenon occurs within the cloacal entoblast, the ventral extension of the primitive urogenital sinus, which will be the phallic portion of this sinus. The urorectal fold, which has come closer to the perineum by progressing towards the cloacal tubercle, is at present referred to as the perineal urorectal septum. This septum will end up by merging with the remainder of the endodermal lamina,5 as of the 42nd day of development (Fig. 2.4), thus determining two ducts, the ventral urogenital duct and the dorsal intestinal duct, as well as two didermic membranes, i.e. a ventral membrane, the urogenital membrane and a dorsal membrane, the anal membrane. At the same time as the development of the urogenital duct, which has become the urogenital sinus, four ducts are also developing in the embryonic mesenchyme (mesoblast). They will end at this sinus and thus divide it into a cranial, urinary, vesicourethral section (future urinary bladder + future proximal urethra) and a caudal genital section: the pelvic section of the urogenital sinus. These four ducts are the two mesonephric ducts: Wolff channels and the two paramesonephric ducts (Muller channels).6 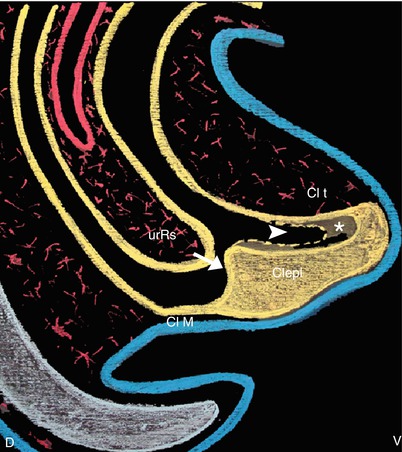 Median sagittal section of the pelvic region (drawing of a micrograph female human fœtus; 40th day of development) (While the urRs is progressing toward the Clepl, which is digged (asterisk) toward the top of the cloacal tubercle (phenomenon explained by apoptosis and convergent vacuolisations)) Clepl cloacal entoblastic plate (lame entoblastique cloacale of French authors), Cl M cloacal membrane, Cl t cloacal tubercle, urRs urorectal septum, Oblique white arrow it shows the direction of urRs’s progress toward the Clepl (observe that the urRs is quite in contact with the Clepl), White arrowhead it shows the digging of the Clepl which will result in the formation of the phallic part of the future urogenital sinus 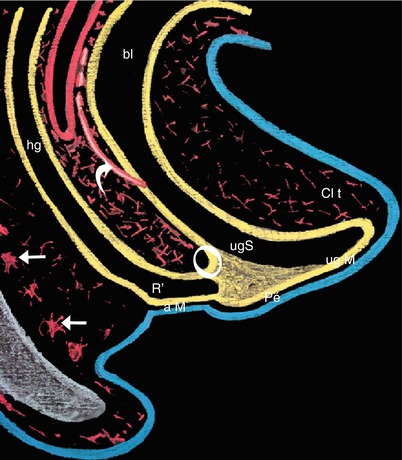 Median sagittal section of the pelvic region (drawing of a micrograph female human fœtus; 42th day of development) (The fusion of the urRs with the Clepl (white circle), which occurred at the end of the 6th week of development, divides the primitive cloaca into two ducts: the urogenital sinus, ventral and the hindgut, dorsal. The primitive perineum separates the urogenital membrane from the anal). a M anal membrane, bl bladder, Cl t cloacal tubercle, hg hindgut, Pe perineum, ug M urogenital membrane, ug S urogenital sinus, R′ future rectum, curved white arrow it shows one of the two paramesonephric ducts opening into the urogenital sinus, white right arrows mesenchymatous condensations which will form the vertebras
On the last day of the embryonic stage, i.e. on the 56th day, at the end of the 2nd month of development (Fig. 2.5), all is ready so that the last modifications can occur. Following these modifications, it will rapidly be possible to identify the sex of the foetus. The 56-day-old embryo shows, on the median sagittal section, two endodermal ducts: a dorsal duct corresponding to the posterior intestine and its caudal expansion, the rectum, and a ventral duct corresponding to the low urinary tracts with an expansion, which is the bladder, with an extension forming the three parts of the urogenital sinus, — from top to bottom, the future urethra (Sg-u1 portion of the urogenital sinus) whose external orifice will be located just above the vaginal orifice,7 the Sg-u 2 portion (pelvic portion of the urogenital sinus) and the distal portion (phallic portion of the urogenital sinus). The two endodermal ducts are blind and closed by the anal membrane and the urogenital membrane, respectively, between which the future perineum will be positioned. The junction between the pelvic and phallic portions of the urogenital sinus comes in contact with the utero-vaginal channel of Mullerian origin, at the end of which an endodermal budding (sino-vaginal bulbs) has developed and which will grow hollow to form the distal third of the vagina.8 Between the uterine body and the rectum, the peritoneal pouch (Douglas pouch) has inserted itself between the uterine body and the rectum, thus forming the bottom of the peritoneal pouch: the utero-rectal pouch. At the same time and as of the 7th week, the top of the old perineal tubercle has been modelled so as to form a spherical end: the genital tubercle located in front of the distal end of the phallic urethra. It is also at this stage that are now distinguished, from a ventral viewpoint, the pubic bones and the pubic symphysis, which have developed from the pre-sinus mesenchyme, and, from a dorsal viewpoint, the sacral and coccygeal vertebrae, which have developed from the dorsal mesenchyme and which surround the distal part of the neural tube (distal end of the spinal cord). As from the 1st day of the 3rd month of development, the embryo becomes a foetus. It is still not possible to externally identify if the foetus is male or female. 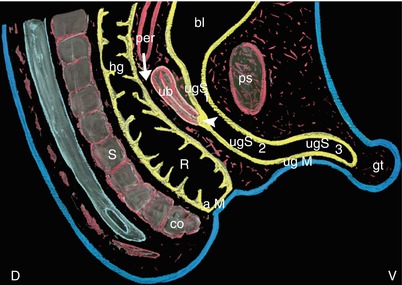 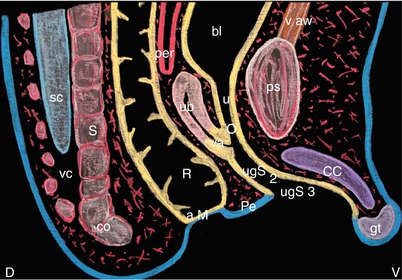 Tags: Anatomic Study of the Clitoris and the Bulbo-Clitoral Organ
Mar 29, 2017 | Posted by admin in UROLOGY | Comments Off on Formation of the Clitoris
Premium Wordpress Themes by UFO Themes
WordPress theme by UFO themes