What is the best imaging modality for diagnosing a non-urethral abnormality of the penis?

Ultrasound is still considered first line when evaluating for abnormal masses, abscesses, or penile hematomas. However, the superior soft tissue contrast and spatial resolution of MRI make it very valuable when ultrasound findings are equivocal. Penile malignancies, periurethral abscesses, hematomas, venous thrombosis, or penile fractures can all be diagnoses with a high degree of accuracy with MRI. T1-weighted contrast-enhanced images below depict a traumatic intracavernosal hematoma (left) with active bleeding (right).

What renal abnormalities are demonstrated below after a blunt abdominal trauma?

About 10% of significant blunt abdominal traumatic injuries demonstrate renal injury. Most such cases only manifest with minor lacerations or hematomas but occasionally, the vascular pedicle or any other part of the renal artery and vein can be damaged. Complete transaction of the vascular pedicle is known to occur, but oftentimes vascular injuries such as pseudoaneurysms or dissections can be present. Pseudoaneurysms are collections of blood contained by surrounding tissue and in communication with the vessel. They result from traumatic tears in the vessel wall. They appear as rounded outpouchings from the vessel and fill with IV contrast as the vessel does. Traumatic dissections result when the intimal layer of the vessel wall tears. Blood then “dissects” through the media, separating the intima from the rest of the wall and forming an intraluminal intimal flap. Vascular injuries often must be treated with endovascular catheter embolization, usually of the main renal artery.

What is a Page kidney?

Occasionally in the setting of trauma, a subcapsular fluid collection can develop around the kidney. These collections are usually hematomas, but can also be urinomas from a damaged collecting system or seromas. The kidney capsule prevents release of the fluid into the retroperitoneum, which causes a buildup of pressure on the kidney itself. If this pressure becomes great enough, blood flow to the kidney is restricted, activating the renin–angiotensin system and causing reactive hypertension. This is referred to as a “Page kidney.” On imaging, an encapsulated fluid collected will be seen surrounding and compressing the kidney.

What are the imaging findings below and what diagnosis do they represent?

Retroperitoneal fibrosis is an idiopathic disorder characterized by desmoplastic bands of fibrous tissue formation in the lumbar retroperitoneum. A mantle of soft tissue encases the aorta, inferior vena cava, and the ureters. CT is the imaging modality of choice for this disorder and will easily demonstrate a fibrous plaque, which can extend from the crus of the diaphragm to the iliac vessels. There is often medial displacement of the ureters with proximal ureteral dilation and often hydronephrosis. Contrast enhancement of the fibrous tissue can be seen if it has recently formed with an active inflammatory response. The axial CT image above demonstrates retroperitoneal fibrosis encasing the aorta and the medial portions of the renal arteries and veins (white arrows). Note that the density of the plaque is similar to muscle.

What are the CT findings demonstrated below?

The pictures demonstrate an extraperitoneal bladder rupture. Traumatic bladder ruptures are often first diagnosed with the initial CT trauma survey scan. Bladder rupture is best seen on delayed CT images, after contrast has been allowed to accumulate in the bladder and potentially extravasate, revealing the location of the rupture. Bladder rupture is divided into 2 types: intraperitoneal and extraperitoneal. Extraperitoneal rupture occurs more frequently and is usually secondary to fragments of bone from pelvic fractures tearing the bladder wall. Contrast will be seen in the paravesical and presacral spaces and can even track along the retroperitoneum superiorly. Occasionally, such ruptures can dissect into the subcutaneous tissues of the anterior pelvic wall or into the thigh or scrotum. Intraperitoneal ruptures are usually secondary to blunt force against a distended bladder. In these cases, contrast will be seen extravasating into the paracolic gutters, pouch of Douglas, or around the small bowel loops. Intraperitoneal ruptures require surgical repair. The above CT scan depicts an extraperitoneal bladder rupture with contrast extravasating into the subcutaneous anterior tissues from an associated pelvic fracture. Diastatic, displaced pubic symphysis is visible on the left image.

What do the CT findings below represent?

Prostatic abscess. Occasionally, abscess formation may be a complication of prostatitis. These abscesses appear as unilocular or multilocular rim-enhancing fluid collections usually within the peripheral portion of the gland. The abscess may spread through the prostate capsule and into the periprostate tissue. The CT image below depicts a unilocular rim-enhancing abscess within the prostate. Incidentally, the patient also has fat-filled inguinal hernias.

What is the role of renal CT and MR angiography?

CT and MR renal angiography are used to diagnose renal artery stenosis (RAS), the most common cause of secondary hypertension. Etiologies include atherosclerosis and fibromuscular dysplasia. Atherosclerotic lesions typically occur at the ostium or within the proximal 2 cm of the renal artery. They present as a focal/segmental stenosis. It typically affects men older than 50 years.

CT angiography is also useful in the evaluation of living renal donors prior to surgery to define the anatomy. MR angiography has traditionally also been used to evaluate the vena cava for renal masses, where a suspicion of vena caval thrombus exists.

The above scan is a normal CT angiogram showing arterial and venous anatomy of the left kidney. The appearance of the vena cava is dark due to incomplete mixing with the contrast. The aorta is still bright white indicating an arterial phase picture.

What are the ultrasound findings in renal artery stenosis?

What is the renal resistive index and how is it used?

How does a nuclear medicine study evaluate for renovascular hypertension (RVH)?

Technetium 99m-DTPA and MAG3 are radionuclide agents cleared by the kidneys. Patients with RVH may show a unilateral reduction in flow, while function is preserved. This study may be performed in conjunction with an ACE inhibitor, such as captopril. The ACE inhibitor blocks efferent arterial vasoconstriction, resulting in a decrease in the glomerular filtration rate (GFR) and effective renal plasma flow (ERPF). The study is considered suggestive of RAS if one of the kidneys GFR drops by 30% after captopril is administered.

What is the role of a renal captopril study in suspected RVH?

The renal captopril study is a good screening test for those suspected of renal artery stenosis. However, patients with positive studies should undergo additional imaging, such as magnetic resonance angiography or renal angiography.

Which urinary tract stones are radiolucent on CT?

Indinavir stones can only be seen by secondary findings and usually require an intravenous pyelogram (IVP). Matrix stones are soft tissue attenuation density. Uric acid and cystine stones range from 100 to 300 Hounsfield units (HU), while calcium stones are typically 400 to 600 HU.

Before the widespread use of CT, it was assumed that most calcium stones are visible on plain films. In reality, plain KUB radiography misses many calculi due to their small size and overlying abdominal or bony structures.

What is the advantage of assessing hematuria with CT urogram versus an IVP?

In the region of the renal medulla, multiple, bilateral calcifications are present. What are the top 3 diagnoses?

What are the ultrasound characteristics of renal stones?

Calculi are seen as crescent-shaped echogenic foci with posterior acoustic shadowing. Posterior shadowing distinguishes small stones from other echogenic structures in the central sinus. Ureteral stones are frequently not seen because of the overlying bowel gas.

Color Doppler is used to visualize ureteric jets of urine into the bladder that excludes high-grade ureteric obstruction. Twinkling artifact or rapid color change posterior to a stone is a useful ancillary finding to confirm a urinary tract stone.

What are the secondary signs of acute obstruction from ureteral calculi on the CT scan?

Typical findings are renal enlargement, striated cortex, perinephric stranding, and ureteral dilation with hydronephrosis (right image), and a tissue rim sign (left image) around the ureter where the stone is located.

What are the CT characteristics of xanthogranulomatous pyelonephritis (XGP)?

XGP is a chronic kidney infection resulting in lipid-laden macrophages creating multiple focal low attenuation masses. There is contrast enhancement of the parenchyma surrounding the collections. Cortical involvement is often diffuse, but can be focal. The kidney is usually nonfunctioning or poorly functioning. The process can extend beyond the renal capsule. Renal cutaneous and renal enteric fistulas are a potential complication. Staghorn calculi are associated with XGP. Staghorn calculi fill the collecting system, forming a cast of the pelvis and calyces. Most are composed of struvite and associated with chronic renal infection. XGP can mimic renal cell carcinoma (RCC), transitional cell carcinoma (TCC), lymphoma, metastases, abscess, and pyonephrosis. Treatment always involves antibiotics, which is usually followed by nephrectomy.

Contrast-enhanced CT images below demonstrate XGP in the right kidney with a staghorn calculus.

An adult patient presents with hematuria, hypertension, and an elevated serum creatinine. An ultrasound shows multiple, bilateral large cysts. A representative CT scan is shown as well as a typical renal ultrasound. What is the diagnosis and recommended treatment?

Autosomal dominant polycystic kidney disease (ADPCKD) is the diagnosis. The ultrasound/CT findings are pathognomonic with bilaterally large kidneys containing multiple cysts. The mean age at diagnosis is 43 years. ADPCKD is associated with cysts in the liver and pancreas and saccular berry aneurysms of the cerebral arteries. Renal insufficiency gradually develops. Treatment is a renal transplant.

What other entities present with renal parenchymal cysts?

What are the characteristics of a simple cyst on renal ultrasound?

A simple cyst appears as a round or oval anechoic structure, with an imperceptible wall and smooth margins. There is increased through transmission and no internal echoes.

How can one characterize a simple renal cyst on CT?

Simple cysts are round, low attenuation structures without complexity of the wall. Hounsfield units are less than 20.

What are the typical CT and US findings of renal lymphoma?

CT demonstrates a homogeneous mass with minimal contrast enhancement. On ultrasound, lymphoma is hypoechoic and may show posterior acoustic enhancement. Diffuse infiltration is characterized by renal enlargement. Primary renal lymphoma is rare. It is most often secondary to hematogenous spread from extra renal lymphoma.

How are renal cystic lesions characterized on CT?

• Class IIF—Possibly benign (hyperdense, thick or nodular calcifications in wall or septa, vaguely enhanced, may be >3 cm) (see figure below).

The CT scan shows right renal cyst with dense calcification centrally and multiple septations (Bosniak IIF-III). This proved to be a cystic RCC. Contrast in this case makes identification of calcification difficult to prove conclusively. 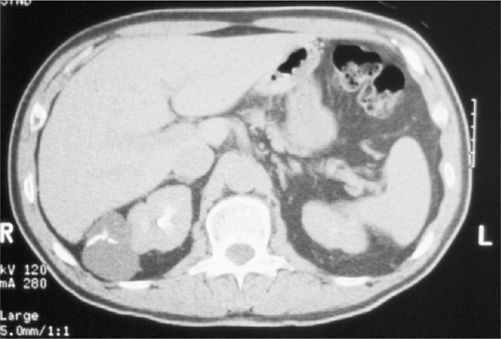