Epidemiological, clinical and experimental studies have established a strong link between chronic infection with HBV virus and HCC. This virus agent, in fact, is responsible for both genotoxic lesions of the liver cells and tumor promotion through increased liver cell proliferation associated with persisting hepatitis. Importantly from a clinical point of view, HBV does not necessarily require the step to cirrhosis to be oncogenic [11]. In a prospective cohort study in Taiwan, the risk of HCC in 3454 HBsAg carriers was 102 times greater than in 19,253 non-carriers [12]. B4 However, the carriers at especially high risk for developing HCC were those with actively replicating HBV (HBsAg+/HBV DNA+) and those with cirrhosis, thus underlying the pathogenic relevance of virus persistence, liver inflammation and long duration of infection. The important role of virus replication in HCC has a solid basis: HBeAg seropositive carriers have six-fold greater risk of HCC (60.2 vs 9.6) than HBeAg negative carriers, after adjustment for age, sex, infection with hepatitis C, cigarette smoking and alcohol use [7]. In the HBeAg negative carriers, the risk of HCC is higher in patients with serum HBV-DNA >13pg/ml than in those with undetectable (<2.5pg) HBV-DNA [7]. In a prospective study of 3653 infected Chinese patients followed for more than ten years, a strict correlation was demonstrated between >10,000 copies/ml HBV-DNA at baseline and increased risk of HCC, again after adjusting for sex, age, cigarette smoking, alcohol consumption, HBeAg, ALT levels and cirrhosis at study entry. B4 The study also provided evidence of reduced HCC risk in patients with spontaneous reduction of HBV-DNA levels during follow-up, though several concerns were raised on the methodology and conduct of the investigations [13]. In another prospective study in Taiwan, the risk of HCC correlated in an additive manner with HBV viremia and the genotype C of HBV, the latter being associated with higher levels of viremia [14]. B4 In two studies in mainland China, an association was demonstrated between increased risk of HCC, viremia, cirrhosis, core promoter and precore mutations, and genotype C of HBV, all thought to reflect independent predictors of HCC that ultimately may interact to boost hepatocarcinogenesis [15, 16]. The potential pathogenic role of genotype C was also confirmed in Japanese patients with HCC [17]. In certain geographical areas, however, environmental factors play a more important co-carcinogenetic role in HCC than host or virus factors. In China and Africa, development of HCC in HBV carriers is strongly boosted by exposure to dietary aflatoxin, which cooperates with HBV in causing irreversible genetic damage to the infected liver cells [18,19]. In Qidong, China, even modest levels of aflatoxin exposure tripled the risk of HCC in HBV infected men [20]. Aflatoxin does not seem to play any appreciable role in the West, but systematic investigations on this risk factor are lacking. Finally, the frequent report of family clusters of HCC has suggested the possible existence of increased susceptibility to the carcinogenetic effect of HBV in family members, after adjustment for relevant environmental risk factors for HCC [21]. The identification of the above predictors of HCC in HBV carriers has been instrumental in the definition of the epidemiological profile of the HBV population to be targeted by screening programs aimed at early diagnosis of HCC [2]. Healthy carriers may develop HCC, but are at substantially lower risk, and often distinguishing between clinical subsets of HBsAg carriers may be difficult unless the patients are periodically assessed with laboratory or histological investigations [22]. The strong link between HBV and HCC has been further confirmed by the decrease of HCC that has been observed among Taiwanese children since the start of mass vaccination of all newborns against HBV [23]. The AASLD indicates surveillance for non-cirrhotic HBV-carriers with signs of liver inflammation, like elevated serum ALT values and >103 HBV-DNA, following the demonstration of the pathogenetic importance of HBV replication in HCC.

Patients with porphyria cutanea tarda, genetic hemo-chromatosis, α-1-antitrypsin deficiency, tyrosinemia and hypercitrullinemia are also at high risk for HCC. Patients with glycogenosis types I and III, Wilson’s disease and hereditary fructose intolerance may also develop HCC, but are at substantially lower risk [24]. HCC has also developed in patients with autoimmune hepatitis and primary biliary cirrhosis, probably reflecting treatment-related improvement in patient survival. HCC was also found in 64% of 160 Japanese patients and in 48% of 101 South African black people with Budd-Chiari syndrome [25, 26]. However, in these studies the possible role of other unidentified carcinogens could not be excluded.

Ultrasound is the method of choice for screening, since it has adequate sensitivity, specificity, positive and negative predictive values [3]. Based upon studies of tumor volume doubling time, six months has been selected by most experts in the West as the ideal interval of screening with US, whereas in the Far East, the three-month interval for screening is largely adopted. In Italy, a study in hemophiliacs chronically infected with hepatitis C virus demonstrated similar efficacy of 6-month and 12-month intervals of screening in the identification of potentially curable HCC [27]. In France, a multicenter study in patients with compensated cirrhosis showed that increasing the frequency of US examinations every three months did not increase the accuracy of screening whereas it resulted in increased costs to treat patients with false-positive results [28].

The serum assay AFP is no longer considered for screening by AASLD and EASL due to the high rates of false positive and false negative results in patients with chronic liver disease. Whether other serum markers like des-gamma carboxy-prothrombin (DCP) and fucosylated AFP (AFP-L3) should be incorporated into surveillance for HCC, is debatable [2]. A DCP value of 150mAU/ml had a better positive predictive value for differentiating early HCC from cirrhosis than an AFP value of 13ng/ml (92% vs 54%) [29]. The AFP-L3 variant with high affinity to lens-culinaris, is more specific for HCC than total AFP too, but differences among studies in assay methods, cutoff values chosen as diagnostic for HCC, and case mix with respect to early tumors, do not allow for a definitive evaluation of the accuracy of this marker [29].

An abnormal screening test needs to be confirmed by either a US-guided liver biopsy or imaging-studies [3]. In patients with cirrhosis and a liver nodule detected during screening/surveillance, HCC can be diagnosed by imaging techniques without the need for a histological examination (see Table 40.2) [30]. CT scan, MRI and contrast-enhanced US serve the purpose whenever arterial enhancement of the nodule is demonstrated and followed by wash-out of contrast in the delayed venous phase [31]. The accuracy of radiological diagnosis, however, is tumor size dependent: the diagnosis is attained in all nodules >2cm in diameter with one imaging technique only, whereas nodules between 5 and 20 mm in size escape diagnosis in two-thirds of the cases despite application of two imaging techniques [30]. Liver nodules not accurately diagnosed by imaging will require histological examination with a liver biopsy or close monitoring with US carried out at three-month intervals (enhanced follow-up). The risk of seeding should be considered as a complication of biopsy: in 41 papers specifying the total number of patients biopsied, the median risk of seeding was 2.9% (range 0–11%) for biopsy group, being lower (0.61–1.4%) in therapeutic percutaneous procedures [32]. The radiological diagnosis of HCC is complicated by false positive results in the presence of artero-venous shunts and macroregenerative nodules with dysplastic liver cells. Currently, dysplastic macronodules can be discriminated from early tumors by morphological criteria based on exclusion of microscopic stromal invasion [33]. Immunostaining for GPC-3, and structural and functional analysis of the genetic profile of the nodules may also distinguish between macronodules and tumors [4, 34]. Falsely negative nodules at contrast imaging are also a problem when searching for very early tumors, accounting for approximately 20% of all 1–2 cm in size HCCs [33].

Table 40.2 Radiological diagnosis of hepatocellular carcinoma in patients with cirrhosis according to the guidelines of EASL and AASLD [2, 3, 29].

Is liver-related mortality reduced by screening?

In the last decade, more than 50% of all patients in Japan have been diagnosed with a TNM I/II tumor compared to the 1980s, when only a minority of the patients with a HCC were diagnosed in the early stage [35]. In a national survey of 554 members of the AASLD, the vast majority of respond-ers indicated that patients with cirrhosis were routinely screened using US [36].

A surveillance program of semi-annual determinations of AFP in HBV carriers in Alaska led to the identification of curable HCC in 40% of the affected patients, a fact that was perceived as beneficial since prior to AFP screening programs the case-fatality rate for HCC in Alaskan natives was 100%, with an average survival of three months [37]. B4 A randomized controlled study conducted in Shanghai area using abdominal US and serum AFP every six months among individuals with chronic hepatitis and other risks for HCC, showed a reduction in the mortality rates in the screened versus unscreened population (83.2 vs 131.5 per 100,000 inhabitants) [38]. A1d The study, however, has limitations in the design and conduct, because the proportion of patients with cirrhosis is unknown, transplantation was not included among the radical therapies and the compliance of the population to the program was suboptimal (58%) (see Table 40.3). Notwithstanding all these limitations, the RCT in Shanghai confirms the importance of early diagnosis for improving HCC-related mortality in the community.

Table 40.3 A population-based screening for HCC: the importance of early diagnosis for improving HCC-related mortality[38].


In cirrhotic patients attending hospital facilities, the HCC-specific mortality rates were reduced in patients with HCC detected during surveillance, most likely due to improvements in both detection and treatment. In a re-analysis of 112 cirrhotic patients with HCC detected during a hospital-based surveillance program, the survival rates were improved in patients who were treated for a liver cancer which had developed during the previous five years of surveillance compared to previous intervals (90% vs 55%, p = 0.0009) (see Table 40.4) [7]. B3 Increased survival was attributed to a significant reduction in the mortality rates of treated patients (from 34% to 5%, p = 0.003), due to wider application of curative treatments and improved selection of patients undergoing surgical or ablative treatments. In Taiwan between 1989 and 1998, there was a significant increase in survival among 3345 patients with a HCC during the previous five years (from 29% to 35%), that was only in part (34%) due to advancement in medical care, but mostly (66%) attributable to early detection [39]. B4

Is surveillance in patients with cirrhosis cost-effective?

Table 40.4 A clinic-based surveillance of 447 cirrhotics: the importance of treatment refinement for improving HCC-related mortality[7]. 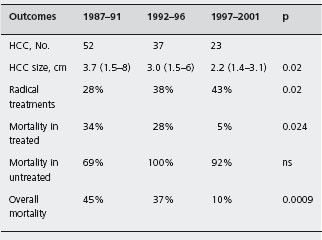 Treatment of patients with cirrhosis and HCC