Electronic supplementary material
Supplementary material is available in the online version of this chapter at 10.​1007/​978-3-319-14989-9_​2.
The reader may be surprised for not finding in this chapter many of the traditional terms historically used to refer to the different portions of the sphincter mechanism of the human being. We use a different terminology that we believe is realistic, useful, and with important practical and technical implications for the practicing surgeon. This is a result of our observations of the different anatomic variants, found in more than 2,032 surgical explorations of the pelvis and the anorectum of patients suffering from anorectal malformations, as well as many others operated to resect tumors and to repair pelvic organs (urethra, vagina, and rectum).
In the early times, when we performed the first posterior sagittal approaches to repair anorectal malformations, influenced by the traditional concepts expressed in the available textbooks on the subject [1, 2], we were looking for the “puborectalis sling,” the “pubococcygeal muscle,” the “pubourethralis muscle,” the “iliococcygeal muscle,” the “superficial portion of the external sphincter,” the “deep portion of the external sphincter,” and the “internal sphincter,” and we were rather frustrated for not seeing what was described in the textbooks. Or at least, what we were seeing was very different to what was described.
In addition, through the years we found that what we observed as part of the sphincter mechanism in one patient was never the same as the one that we saw in another one. After a large experience with the surgical treatment of anorectal malformations, we are now certain to believe that we are dealing with a spectrum of anatomic variations.
We are aware of the fact that human beings (and surgeons are not exceptions) prefer to deal with artificial, man-made, classifications to refer and to discuss biological phenomenon. Yet, we like to say that Mother Nature does not like our classifications and continues producing humans, animals, and biological specimens following a spectrum type of pattern. We recognize that it is not easy from the clinical point of view to talk about spectrums, but we could not ignore reality.
Figure 2.1 shows what we think is the best photograph ever taken of the pelvic anatomy of a male cadaver. The authors managed to show a perfect sagittal section. We feel admiration and respect for such achievement. This magnificent photograph was reproduced with permission from the excellent “Colon Atlas of Human Anatomy” by R.M.H. McMinn Emeritus Professor of Anatomy, Royal College of Surgeons of England and University of London and R.T. Hutchings, photographer, formerly Chief Medical Laboratory Scientific Officer, Royal College of Surgeons of England. Year Book Medical Publishers, Inc., Chicago 1977, page 248. 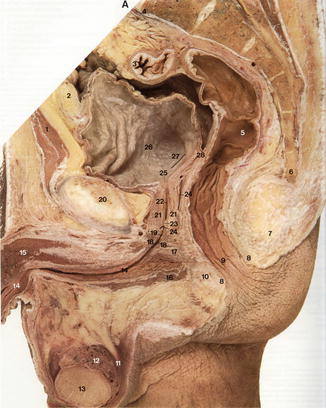 MRI of a sagittal section of the normal pelvis. (a) Relaxed sphincter mechanism. (b) Contracted sphincter mechanism
Rather, one can see a muscle structure that comes from the anterior aspect of the lowest part of the sacrum and coccyx and runs all the way down to the skin attached to the posterior rectal wall. It actually runs in continuum and one cannot see any hint of separation of different structures. In our observations of normal human beings (not only in cases of anorectal malformations) operated posterior sagittally for other reasons (tumors, trauma), and using an electrical stimulator, we have always been able to identify this strong funnel-like muscle structure. If one touches that muscle structure in the upper portion, one can elicit a contraction that pushes the rectum forward as described for the levator muscle. If one touches the lowest part of that muscle, one can see an elevation of the anus, and perhaps that is why originally this structure was called levator muscle. That portion of this sphincter mechanism made mainly of vertical fibers running parallel to the rectum we call it “muscle complex,” to differentiate it from the upper portion (levator) that is made out of horizontal fibers that compress the rectum from behind. However, these different portions of the sphincter mechanism do not contract separately; in real life, they contract in a massive unified way (Animations 2.1, 2.2, 2.3, 2.4, and 2.5). The muscle fibers running longitudinally (parallel to the rectum) elevate the anus when they contract, whereas those fibers that surround the rectum are the ones that produce the compression of the rectum posteriorly. Perhaps the point of maximal contraction of this funnel-like muscle structure is what has been considered the puborectalis sling, but we must emphasize that there is no real anatomic separation of these structures. Near the skin, the funnel-like muscle joins other types of muscle that run superficial under the skin and divide into two portions, one on each side of the anus, and that is why we call those “parasagittal fibers.” The contraction of these muscles may produce the impression of closing the anus in a circular fashion; yet, actually these are parasagittal fibers that join one side with the other, posterior and anterior to the anal opening. The parasagittal fibers run actually perpendicular to the muscle complex. We arbitrarily use the term “levator” to refer to the upper portion of the funnel-like muscle mechanism and use the term “muscle complex” to its lower portion. The point where the muscle complex and parasagittal fibers cross represents the limits of the sphincter.
When the anatomy of the anorectal sphincters is presented in this rather simplistic way, it is easy to teach and to learn.
Traditional anatomy concepts have been repeated from one generation to another, full of details or concepts without clinical relevance. The medical students are frequently obligated to learn some of those concepts.
We have been impressed by publications related with the anatomy of the sphincters; the authors frequently show real photographs of the anatomy, yet they over-impose arrows to show inexistent, imaginary structures [2–5]. In other words, photographs show the real anatomy, whereas the diagrams or the arrows show what the authors wanted to see.
More recently, advances in the technology of imaging show images (Fig. 2.2) of the real anatomy; however, again the authors fabricate otherwise unnecessary diagrams showing their preconceptions and biases [6–13].
It is even more impressive to see how rather bizarre anatomic concepts, like the idea of a “triple loop” without any evidence to support its existence, are accepted, published, and repeated between surgeons [14, 15].
In a medical community where everybody seem to be able to see clearly structures such as the puborectalis muscle and all the other portions of the sphincter mechanism, very few dare to express skepticism and disagree [16, 17]. During our literature review, we found an excellent honest paper written by Dr. Arthur F. Dalley II, PhD, [17]. After a very thoughtful discussion, he concludes saying: “I recommend that the three-part external anal sphincter be removed from gross anatomy texts, dissectors and atlases and be relegated to the junkyard of anatomic trivia where it may languish for the sake of the historical anatomist or the rare individual who spends time carving out the most meticulous of dissections.” This is a paper that all colorectal surgeons must read.

This elusive structure has been described as a thickening of the circular layer of smooth muscle of the bowel in the area of the anorectum. The literature related to this structure, in general, has the following characteristics:

All these descriptions of our literature findings related with the “internal sphincter,” plus our concepts discussed in Chap.​ 25, explain our skepticism related with the existence, function, and relevance of this structure.

Figures 2.3, 2.4, 2.5, and 2.6 show the anatomic variations that form part of the spectrum seen in cases of anorectal malformations. Animation 2.1 shows the sagittal view of the anatomy of the pelvis of a normal human being. Figure 2.3 shows the most benign of all defects which is the perineal fistula. The sphincter mechanism in these types of cases is almost normal. The rectum, on the other hand, deviates in its lowest portion to open in the perineal body, anterior to the center of the sphincter. The rectum is dilated. 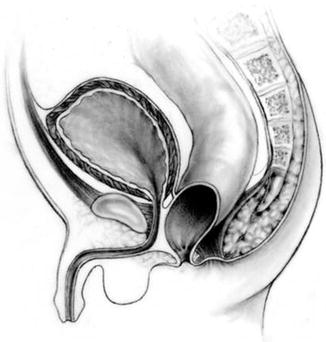 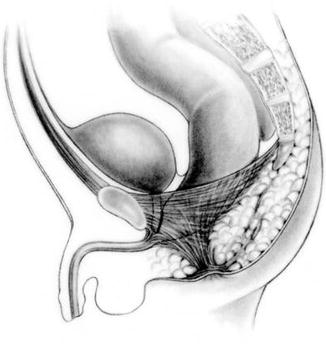 Diagram showing the most common anatomic sphincter pattern seen in patients with bulbar fistula
Only gold members can continue reading. Log In or Register to continue