For endovascular repair of an aortic aneurysm (EVAR), an upside-down Y-shaped prosthetic stent graft is placed within the aneurysm to exclude the aneurysm from circulation. The IMA will therefore be effectively “ligated,” and this could lead to compromised blood flow to the sigmoid colon. Fortunately, ischemic colitis after EVAR is a rare event. In the rare situation that ischemic colitis is suspected after EVAR, attention should be focused on several potential vascular etiologies listed in Table 35.1.

IMA inferior mesenteric artery, SMA superior mesenteric artery, EVAR endovascular aneurysm repair
If a vascular etiology is discovered during workup of ischemic colitis after EVAR, attempts should be made to correct that problem as quickly as possible. For example, in a patient with a known indispensible IMA (>3 mm in diameter and widely patent on preoperative CTA) who undergoes EVAR and develops ischemic colitis and a high-grade SMA stenosis is identified, the SMA should be stented using an endovascular approach (Fig. 35.2).

A patient with left-sided colon cancer was noted to have critical SMA stenosis on preoperative CTA (Panel a). This lesion was preoperatively assessed with angiography (Panel b) and successfully stented (Panel c) prior to elective left hemicolectomy

Key Concept: Multiple new options exist to treat patients presenting with this scenario. Don’t ever feel obliged to perform two definitive operations simultaneously.
A classic board question in the 1990s revolved around what to do when a colon mass is found during elective AAA repair or, vice versa, what to do with a large aortic aneurysm during urgent colectomy for an obstructing colon cancer. The answers in the twenty-first century are a little bit easier, as minimally invasive techniques in vascular surgery have essentially eliminated the most feared risk of any combined strategy—graft infection. The first situation is now a rare event due to two facts: (1) the majority of patients being worked up for either situation have had an axial imaging study in the form of a CT scan, and with refinements in imaging techniques, either pathology can be easily diagnosed prior to any operation. (2) The majority of AAA repair are performed using endovascular techniques.
In the second scenario, a large aortic aneurysm found during urgent operation for obstructing colon cancer, the answer is even easier. Complete the colon operation and perform EVAR in the postoperative period in a staged fashion. This can often be performed during the same admission, as long as the patient is not bacteremic, even if there was intra-abdominal soilage during the first operation [12].

Key Concept: Patients with thrombosis of the superior mesenteric vein or portal vein following total abdominal colectomy have an underlying hypercoagulable condition until proven otherwise. The mainstay of therapy is anticoagulation.
The inferior mesenteric vein (IMV) is often routinely ligated during colonic resection, and subsequent thrombosis of this vein is associated with minimal morbidity. Portomesenteric venous thrombosis, however, is an uncommon but potentially lethal condition associated with either laparoscopic or open colon surgery. It is thought to occur more commonly in patients with specific thrombophilias or other predispositions to clotting. Portomesenteric venous thrombosis typically presents an average of 14 days after surgery, and the most common presenting symptom is abdominal pain [13]. Diagnosis can be made by either CT imaging (Fig. 35.3) with a classic “halo” sign in or around the portal vein or by duplex examination. The latter exam can be confusing due to bowel wall edema or gas. 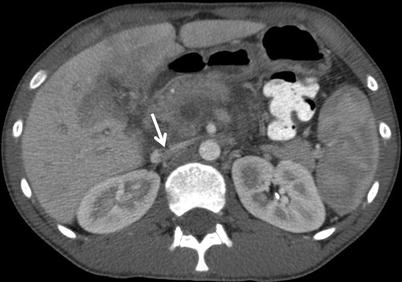 SMV thrombosis (arrow) after elective laparoscopic colectomy
Treatment should be individualized based on extent of thrombosis and the presence of bowel ischemia. The mainstay of treatment for this disease process is systemic anticoagulation with heparin followed by warfarin therapy. Prior to anticoagulation, workup for a hypercoagulable condition should be done and include the following blood tests: prothrombin time (PT), partial thromboplastin time (PTT), international normalized ratio (INR), factor 5 Leiden, protein C, protein S, prothrombin G20210A mutation, antithrombin III, antiphospholipid antibodies, and homocysteine levels. Aggressive attempts at either open surgical thrombectomy or transhepatic thrombolysis should be approached with caution. The duration of warfarin therapy in these patients is controversial but in general, those patients who present with no provocation for the thrombotic episode and a documented hypercoagulable condition, therapy should be lifelong. If the thrombotic episode was provoked (i.e., surgical procedure), therapy should be for 6 months.
Only gold members can continue reading. Log In or Register to continue