The Bulbo-clitoral Organ in the Sexual Act

Abstract
Although our study is mainly anatomical, it appeared useful to include some physiological data specifically related to the modifications and the role of the bulbo-clitoral organ during the different phases of the sexual act.

Although our study is mainly anatomical, it appeared useful to include some physiological data specifically related to the modifications and the role of the bulbo-clitoral organ during the different phases of the sexual act.
How does this organ behave during intercourse? Here is a question, which has remained without an accurate answer for a long time, as if it were taboo or too mysterious to be mentioned. Fortunately, what was, up until now, only assumptions or the product of people’s imaginations has now been confronted with the reality of images obtained with various methods of exploration and especially techniques providing dynamic representations. The recent progress made in studies on intercourse in relation to computed tomography, NMR (publications of A. Burdens et al.), echography (work of Odile Buisson and Pierre Foldes), macrophotography and videos have finally made it possible to clarify this question.

15.1.1 Description of the Different Phases

It should be recalled that, since the work of W.H. Masters and V.C. Johnson, it is known that the sexual cycle of a woman, when it is complete (and therefore ideal!), has four phases: an excitation phase of variable duration, a plateau phase (which lasts for 3 min maximum), an orgasm phase (which only lasts a few seconds1) and a resolution phase of 15 min.
During the phase of sexual excitation, triggered by the imagination and erotic memories, a favourable context, the stimulation of various erogenous areas in a woman (including the clitoris itself) and maintained through the secretion of dopamine,2 the bulbo-clitoral organ undergoes many significant transformations:

The penetration and the back-and-forth movements of the male penis in the vestibulo-vaginal tract will then generate, in women, various phenomena leading to the full completion of the sexual act. These phenomena will enable her to reach the plateau phase. We will successively consider the following:

During this penetration, it will push the anterior vaginal wall backwards and the urethra forwards, by applying, with a certain force, these structures on the commissure of the bulbs and on the intermediate area, which will be crushed against the pubic symphysis (Fig. 15.1). Similarly, the penis drives back the lateral walls of the vagina, thus compressing not only the bulbs but also the clitoral roots, which are all at maximum turgescence. 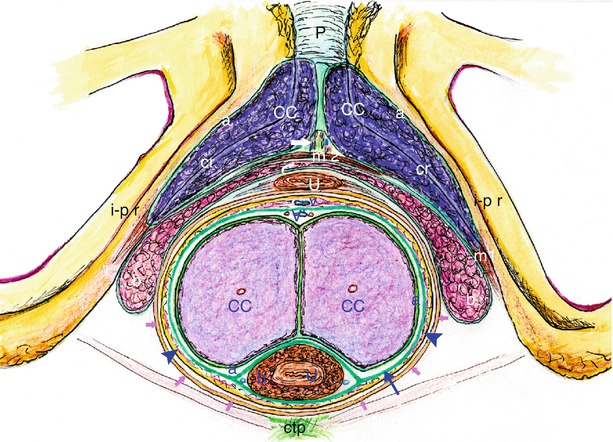 Sketch from a coronal section of the erectile bodies during coïtus, at the time of the penis pressure (note: white captions for bulbo-clitoral organ; blue captions for penis). White captions: a albuginea (getting very thin because of the turgescence of corpora cavernosa), b bulb, CC corpus cavernosum, cr crus clitoridis, m1 ischiocavernosus muscle, m2 bulbo-spongiosus muscle, U female urethra, right white arrow location of the pars intermedia, curved white arrow commissure of the bulbs (commissura bulborum). Blue captions: a albuginea, b corpus spongiosum urethrae (spongiosus bulb), CC corpus cavernosum, U male urethra (penile urethra), V subcutaneous dorsal vein, V′ deep dorsal vein, right blue arrow it shows the Buck’s fascia (fascia penis), Blue arrowhead they show the erected penis. Other captions: P pubic symphysis, i–p r ischio-pubic ramus, ctp central tendon of perineum, little pink arrows they show the posterior part of the vaginal wall (the vaginal cavity is completely distended by the penetration of the erected penis)
With an echography (work performed by O. Buisson et al.), it is possible to observe, during each penetration, an actual “displacement” of the bulbo-clitoridal organ. The arc formed by the commissure of the bulbs increases in size, while the bulbs, which are saturated with blood to their maximum capacity, become wider. The roots of the clitoris, whose volume doubles during the back-and-forth movements, are drawn apart by the dilated penile cylinder. Their junction angle is transformed into an arc. The intermediate network is also pushed back against the symphysis. Each back-and-forth movement acts as a pump and propels blood to the clitoral body through the vessels of this network.7 Overall, during the penetration-withdrawal movements, the internal part of the female erectile bodies is the site of maximum blood saturation and intense compressive phenomena, which tend to make the blood flow back to the discharge pathways (Kobelt’s network and peri-vaginal venous plexus). It obviously generates an intense stimulation of the anterior vaginal wall and of the urethra, which are caught in a vice-like grip between the female erectile bodies and the penis at maximum turgescence.
In men, the combination of vascular saturation, which induces the erection, and of the compressive phenomena generated by the turgescence of the female erectile bodies similarly maintains the stimulation and thus the erection.
There is thus a true feedback, “a sexual synergy of the two partners with reciprocally reinforced phenomena” (P. Lavoisier et al.). The penis in erection, penetrating the vagina, modifies the intra-vaginal pressure and generates the tumescence of the erectile bodies and the erection of the clitoris. At the same time, the congestion of the peri-vaginal vessels compresses the vagina and thus the penile cylinder increases the intra-cavernous pressures of the penis and maintains its erection.
The back-and-forth movements will enable the following:

Tags: Anatomic Study of the Clitoris and the Bulbo-Clitoral Organ
Mar 29, 2017 | Posted by admin in UROLOGY | Comments Off on The Bulbo-clitoral Organ in the Sexual Act
Premium Wordpress Themes by UFO Themes
WordPress theme by UFO themes