As filtered fluid passes through the nephron, solutes may undergo reabsorption from the tubular fluid to the interstitium and capillaries, as well as secretion in the opposite direction. Thus,

For solute x, one can express this process using the following equation:

[U]x = concentration of x in urine

[P]x = concentration of x in plasma

The specific handling of individual solutes will be discussed later in the pages that follow. In general, however, secretion and reabsorption of solutes may occur along trans cellular (through cells) or paracellular (between cells) pathways. Unlike filtration, which is largely nonselective, secretion and reabsorption are selective processes that can be finely adjusted to modulate the final excretion rate of individual solutes.

Transcellular pathways depend on the presence of membrane proteins, such as transporters and ion channels, which allow solutes to enter and exit cells. Paracellular pathways, in contrast, depend on diffusive or convective forces, which carry solutes between cells. Differences in these transport methods have several important consequences.

First, transcellular routes can be finely modulated by altering the presence or function of the involved membrane proteins. Paracellular routes, in contrast, can in general only be coarsely modulated by adjusting the forces for diffusion or convection. Thus the homeostatic feedback mechanisms providing hormonal input to the kidneys primarily affect transcellular pathways. 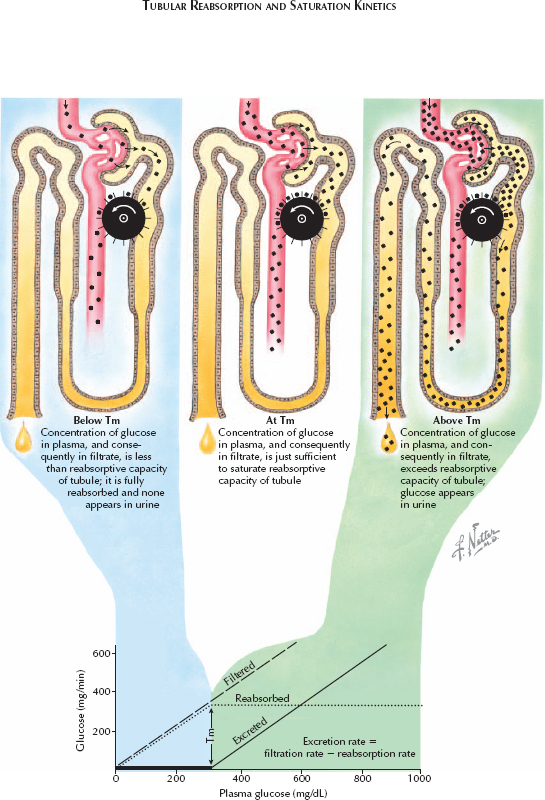 Second, transcellular routes can become saturated, reflecting the limited number and capacity of membrane proteins, whereas paracellular routes generally cannot. In some cases, it is desirable to induce saturation for therapeutic purposes. For example, probenecid and penicillin are both secreted using the same transporters in the proximal tubule. Deliberate administration of high-dose probenecid will saturate those transporters, blocking secretion of penicillin and thereby prolonging its half-life. In other cases, saturation may be a sign of a disease process. Under normal conditions, for example, glucose readily enters the tubular filtrate but is completely reabsorbed, such that none appears in the urine. In diabetes mellitus, however, plasma glucose levels can become so high that the filtered load saturates the reabsorption apparatus, causing glucose to appear in the urine.

Based on the equation given above, the rate at which glucose is excreted in urine can be expressed as follows:

Because glucose is not secreted, SRGlucose is equal to zero. In normal individuals, the reabsorption rate (RRGlucose) is equal to the filtration rate ([P]Glucose × GFR), such that [U]Glucose is zero. Once the reabsorption pathways are saturated and RRGlucose reaches a tubular maximum (Tm), however, the excreted load will vary in proportion to the filtered load. Such saturation tends to occur once serum glucose concentrations exceed 300 mg/dL.