In Bowman’s space, ([T]x/[P]x) = ([T]inulin/[P]inulin) = 1. If, at some later point in the nephron, ([T]x/[P]x)/ ([T]inulin/[P]inulin) = 1/2, it suggests that half of the water, as well as half of solute x, have been reabsorbed. If none of solute x had been reabsorbed, the quotient would be equal to 1, since removing half of the filtered water would have doubled the tubular concentration of x relative to plasma, just as for inulin.

One can assess the overall reabsorption and secretion pattern of any given solute by examining ([U]x/[P]x) / ([U]inulin/[P]inulin), a ratio known as the fractional excretion (FE) of x. For those substances that are not freely filtered at the glomerulus, such as ions partially bound to plasma proteins, the plasma concentration should be multiplied by the free fraction. 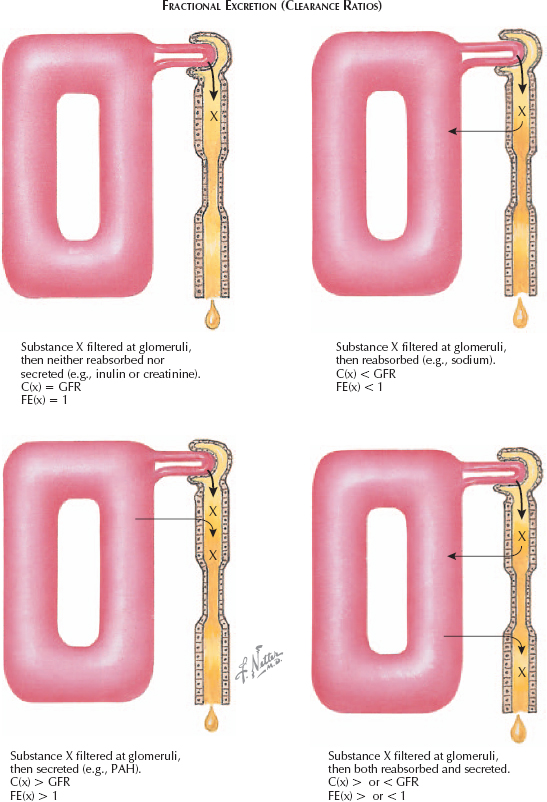 If FE(x) equals 0.01, then 99% of the filtered x has been reabsorbed. In contrast, if FE(x) is greater than 1, then there has been net secretion of x. FE(x) can also be viewed as a “clearance ratio,” which may be easier to conceptualize: 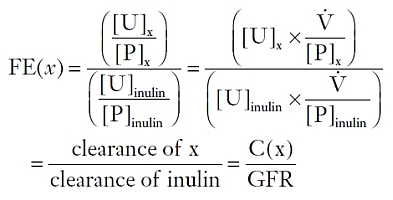 In clinical practice, creatinine is used in lieu of inulin to calculate fractional excretion values (or clearance ratios) because it is an endogenous chemical that is generally at a steadystate concentration in plasma.