Room monitors. (a) Demonstrated the assistant on the patient’s right-hand side with a monitor directly across from their position to prevent neck and trunk torque during the case. These monitors are on mobile booms anchored from the ceiling. Certainly, large monitors can be anchored to the wall. (b) Demonstrates that other monitors are available on both sides of the bed to allow surgical techs and assistants to view the intra-abdominal events

Proper patient positioning is a big key to safe and effective performance of robot-assisted radical cystectomy. Proper positioning is necessary to allow for full range of motion of the robotic arms as well as to prevent harm to the patient in the form of neuropraxias and compartment syndromes. Proper positioning must also be used to secure safe, effective access to the abdomen for the bedside assistant. Given the implications for positioning in RARC, the surgeon should be actively involved in patient positioning for the procedure. All patients should have appropriate intravenous access and possibly even central line access before positioning is completed. We adduct the patient’s arms in a tuck position in all our cystectomy patients using foam pads and the patient’s draw sheet (Fig. 4.2a–c). Leaving the arms out in a “crucifix” position carries the risk of brachial plexus injury in prolonged robotic cases [1]. Care is taken to cushion all pressure points with padding. The arms should be low enough on the patient’s sides to not interfere with the robotic working arms and to allow the surgical field to be prepared lateral to the patient’s anterior-superior iliac spine (ASIS). 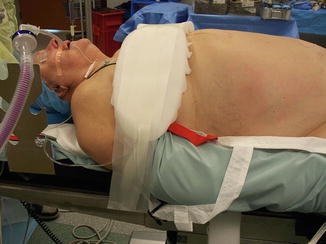 Chest tape to prevent patient slippage. Demonstrates the patient’s chest taped to the table over foam padding to prevent slippage during steep Trendelenburg positioning. Care must be taken not to make the tape so tight as to prevent chest wall motion for ventilation 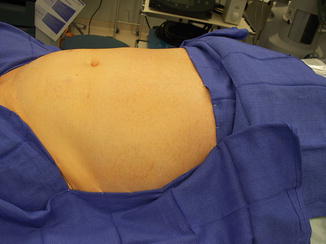 Patient draping. The operative field should be the xiphoid process down to the mid-thigh region with the genitals prepared into the field. The field should be wide enough to include the patient ASIS to allow for lateral port placement
The standard robotic prostatectomy/robot-assisted radical cystectomy position is to have the patient in the low dorsal lithotomy position with the legs in Allen stirrups (Allen Medical Systems, Acton, MA). Once the patient is placed in steep Trendelenburg position, the robot is docked between the split legs. Success of this position requires that the patient’s buttocks be directly at the break in the table. Prolonged dorsal lithotomy positioning is known to carry an increased risk of lower extremity neuropathies [2]. In fact, Warner et al. [2] noted that for each hour in lithotomy position, the risk of motor neuropathy increased 100-fold. Prolonged hip flexion, abduction, and external rotation, as well as pressure point injuries, are all thought to contribute to the morbidity of the dorsal lithotomy position. Care should be taken to secure all pressure points and to insure the legs stay bent at a 45° angle. Leg straightening during the procedure can lead to debilitating neuropathies. It is important to evaluate all pressure points and leg positioning before the patient is draped because operative drapes will hide the patient’s true position once the case begins (Fig. 4.5a, b). Regardless of approach used, pneumatic compression boots should be placed. The popliteal region should be inspected following positioning to insure that there is no pressure in this region from stirrups. Rosevear et al. wisely noted that a potential pressure point exists between the robotic fourth arm and the patient’s left leg [3]. They reported a case of lower extremity compartment syndrome secondary to the pressure exerted by the robotic fourth arm on a patient’s left leg. The authors concluded that surgeons should maintain a high level of suspicion for compartment syndrome or potential neuropathies in all patients exposed to Trendelenburg positioning for long periods of time, especially if the operating room time is prolonged.

Importance of position check before patient draping. (a, b) Are pictures of the same patient in Trendelenburg position and it demonstrates how drapes can hide abnormalities in positioning
Another positioning option is to have the patient on a split leg table. This allows the legs to stay straight without lithotomy positioning. The robot is docked in between the split straight legs. If this option is elected, it is preferred to have straps at the level of the calves and mid thighs with padding between them and the patient [3]. The theoretical advantage of this positioning is to allow the patient to lie in a more anatomical position with the absence of popliteal pressure exerted by stirrups as seen in low lithotomy positioning. However, the lack of lithotomy positioning does not guarantee absence of lower extremity neuropathies. Koc et al. [4] reviewed 377 consecutive robot prostatectomies completed with the split leg table and found five (1.3 %) lower extremity neuropathies. Three of the five had neuropathies relating to the femoral nerve distribution. After adjusting for all variables, prolonged operative time was found to be the only risk factor for the lower extremity neuropathies. Interestingly, elevated BMI was not associated with lower extremity neuropathies in the split leg table studies, despite increased BMI being associated with lower extremity neuropathies in dorsal lithotomy patients [3, 5, 6]. This may suggest an advantage for the split leg table in those with elevated BMI who are facing prolonged operative times associated with RARC. Warner et al. [2] reviewed close to 200,000 lithotomy patients, noting the most common nerve distributions injured with dorsal lithotomy position were the peroneal, sciatic, and femoral nerves. The split leg table injuries tend to involve the femoral nerve most commonly. It is proposed that the hip hyperextension necessary to allow the robot to be docked with the split-leg table may lead to femoral nerve compression as it courses beneath the inguinal ligament [4, 7].
Another option for patient positioning is to have the patient in lithotomy positioning in preparation for docking the robot from the side of the patient. The robot is docked beside the patient as opposed to in between the patient’s legs. This allows unfettered access to the patient’s perineum without undocking the robot, which may be important in females requiring simultaneous transvaginal access for urethral dissection. Transvaginal access may also allow for any uterine mobilization or vaginal cuff mobilization that may become necessary during surgery. Side docking removes the perceived symmetry created by docking the robot from between the legs in the patient’s midline. Port placement remains the same as the standard procedure. The robot is docked at a 45° angle to the lower torso and aligned with the outer border of the left leg stirrup [8]. Colon surgeons and gynecologists have utilized this technique for pelvic surgery with a learning curve of three to five cases and no increase in instrument clashing [8, 9]. All authors have noted that this can only be completed with the second and third generation robotic systems (S and Si units). The first generation systems do not have enough arm mobility for this type of maneuver.
A final option for patient positioning involves side docking the robot with the patient’s legs flat (no lithotomy positioning or split leg). Uffort and Jensen noted this technique to be advantageous in patients with limited hip abduction, such as patients with bilateral hip implants [10]. The authors extended this technique to all robotic prostatectomies at their institution and compared the traditional robotic prostatectomy setup times to those of the above technique. They found that the side docking technique resulted in a 4.5 min improvement in setup time compared to the standard low lithotomy position. This technique did not result in increased robot arm clashing or increased operating room time. This position would not be optimal for any patient that needed perineal/vaginal access during RARC.

Intuitive Surgical Corporation (Sunnyvale, CA, USA) offers numerous surgical instruments for their three generations of robotic systems. Most of the instruments are equipped with Intuitive Corporation’s patented Endowrist® technology. Endowrist technology allows for 7 degrees of freedom, 90° of articulation, motion scaling, and tremor reduction [11]. The company divides their operative instrument selection into five categories—energy, forceps, needle drivers, retractors, and specialized instruments.
Energy instruments include monopolar and bipolar cautery instruments (electrical energy), Harmonic ACE™ (mechanical energy), PK™ dissecting forceps (advanced bipolar), and laser [12].
Standard needle drivers are available as well as devices that have internal suture cutting blades. Forceps include devices for grabbing tissue in an atraumatic fashion. Retractors are devices used to retract tissue. These instruments are usually used in the third robotic arm. Specialized instruments would include hemostatic clip appliers.
Despite the plethora of robotic instruments available, our selection is relatively simple for RARC. The cystectomy portion is almost entirely performed with monopolar scissors in the right hand and bipolar dissecting forceps in the left hand. The third robotic assistant arm usually has large Prograsp® forceps present. These instruments are seldom exchanged during cystectomy. The Cobra® grasper may be helpful when used in the third robotic arm to retract the bladder as it becomes more mobile during the operation (Fig. 4.6) The Cobra teeth are very strong and can be traumatic. We only use this device on tissue that will be removed. This device should never be used to retract bowel. The dorsal vein is sutured with standard needle drivers, although the drivers with internal suture cutting would suffice.

Cobra grasper demonstrates the Cobra grasper used to manipulate the bladder to one side or another once it is mobile. This grasper is used almost exclusively in the third robotic arm. The tips can be very traumatic and we only use this on tissue that will be removed. This instrument should not be used to retract bowel
Only gold members can continue reading. Log In or Register to continue