Urethral ultrasound is typically performed under anesthesia prior to urethral repair by placing the ultrasound probe on the perineum while instilling normal saline into the meatus via a 60 mL catheter tip syringe and applying gentle suprapubic pressure. Urethral ultrasound avoids radiation and allows for evaluation of the length, location and caliber of the urethral stricture as well as the degree of fibrosis within the corpus spongiosum.

The majority of post-RT urethral strictures occur in the bulbomembranous urethra. In this location, a urethroplasty is performed through a perineal incision. A midline perineal incision allows for excellent access to the bulbomembranous urethra. In cases where the stenosis extends into the prostatic urethra a lambda incision may be preferable as it improves visualization of the posterior urethra and facilitates the placement of a gracilis muscle flap.
An anastomotic technique was performed in the majority of urethroplasties performed for post-RT urethral stricture disease and described in the literature [49, 50]. In these cases, a circumferential dissection was performed at the level of the bulbomembranous urethra and the urethra was divided at the distal extent of the urethral stenosis. The dissection is carried proximally until the entire length of the stenosed urethra is resected and sent for pathologic evaluation. In some cases the stenosis extends into the apex of the prostate, necessitating a partial prostatectomy, in order to bring healthy urethral mucosa together. During this dissection brachytherapy seeds are often encountered and should be removed to facilitate the anastomosis. Significant mucosal calcification may be encountered once the urethral lumen is entered (Fig. 10.2). The scarred and calcified tissue should be fully resected and the fresh distal and proximal edges spatulated prior to urethral reconstruction. Urethral mobilization, corporal body splitting, corporal rerouting, and partial pubectomy are surgical maneuvers that may be required to create a tension-free anastomosis. In cases where a large perineal defect exists or for severe radiation damage a gracilis muscle flap can be brought into the perineum to improve tissue healing. 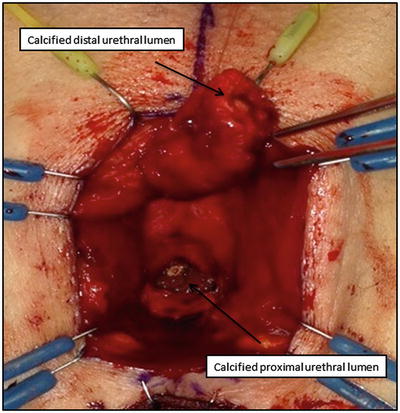 Intraoperative photo of patient in lithotomy with perineal incision. The bulbar urethra is divided at the level of the calcified post- RT urethral stricture. The distal urethral is mobilized to the level of the penoscrotal junction to allow for a tension-free anastomosis
The reported success of operative urethroplasty for post-RT urethral strictures ranges from 69.7 to 90 % with the majority being completed using an anastomotic technique and a mean stricture length of 2.3 cm and 2.6 cm respectively and follow up of greater than 40 months [49, 50]. A ventral onlay technique combined with a gracilis muscle flap was used in 20 patients including 9 who received radiotherapy for prostate cancer with a 77.8 % success rate for the post-RT patients and a mean stricture length of 8.2 cm and median follow up of 26.5 months [51].

Validated questionnaires to evaluate patient reported outcome measures (PROMS) are in development though are not included in published post-RT urethroplasty series. Two outcomes frequently evaluated in the post-operative setting after urethroplasty are continence and erectile function.
The majority of post-RT urethral strictures involve the external urinary sphincter. Anastomotic urethroplasty typically involves removal of this section of the uretha, while ventral onlay may require incising the sphincter. In both situations the patient will be relying on an intact internal urinary sphincter as the primary post-operative continence mechanism. Patients whose internal sphincter is known to be compromised by prior TURP or radical prostatectomy should be counseled of near certain stress urinary incontinence after post-RT urethroplasty. Prostate radiotherapy alone likely leads to some internal urinary sphincter dysfunction. The published incidence of de novo incontinence after post-RT urethroplasty is 18.5 % in one series and was associated with urethral strictures of greater than 2 cm in length [50] and 7 % in another with 50 % rate of spontaneous resolution [49]. Using the ventral onlay technique the de novo stress urinary incontinence rate was 25 % [51]. Patients should be counseled regarding the possibility of new stress urinary incontinence after urethroplasty. De novo erectile dysfunction (ED) was reported in 7 % of one series with a 50.9 % rate of preoperative ED [50].
The stress urinary incontinence that results from a post-RT urethroplasty can be managed with the placement of the artificial urinary sphincter (AUS). Typically, the device is placed 3–6 months after the urethroplasty to allow for adequate anastomotic healing and to ensure urethral patency on cystoscopic evaluation at the initial follow up visit. Radiotherapy appears to increase the risk of AUS revision. Bates et al. published a meta-analysis of 1886 patients who underwent AUS after radical prostatectomy versus radical prostatectomy and EBRT. The revision rate was 16 % higher with a risk ratio of 1.56 in the RP+EBRT group with infection/erosion being the major contributors to the increased revision rate [52]. Brant et al. performed a prospective analysis of 386 patients undergoing AUS and found that pelvic radiotherapy significantly increased the risk of device erosion from 3 % in the non-radiated patients to 15 % in those with a history of radiotherapy. A history of prior urethroplasty did not change the erosion rates [53]. The male urethral sling is not recommended in patients after radiotherapy.

Due to higher rates of urethral stricture recurrence in the radiated patient, post-operative surveillance after urethroplasty is important. The median time to stricture recurrence in the post-RT urethroplasty series is 10–12 months [49–51]. For this reason surveillance must continue beyond 1 year after reconstruction and patients should be counseled to follow up if obstructive voiding symptoms return.
Several series include their follow up protocols. Palmer et al. recommend follow up at 3–6 months and 1 year postoperatively with evaluation of subjective voiding symptoms, uroflowmetry, post-void residual urine measurement and cystoscopy [51]. Thereafter patients are generally followed annually with assessment of subjective voiding symptoms, uroflowmetry, post-void residual urine measurement and cystoscopy if any of the above measurements are abnormal. Stricture recurrence is defined as the inability to pass a 16Fr cystoscope [51]. Glass et al. recommend a similar follow up protocol with a RUG and VCUG at 3 and 12 months and with uroflowmetry annually afterwards with a peak flow of 15 cc/s prompting further urethral imaging [49] (Fig. 10.3). 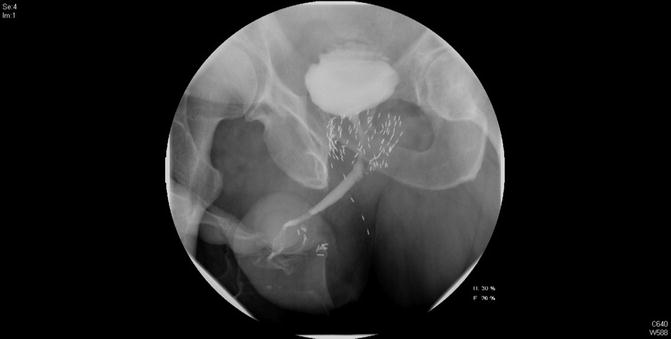 Post-RT urinary incontinence and urethral stricture disease represent relatively uncommon complications of radiotherapy for prostate cancer however both have the potential to significantly impact the patient’s post-treatment health and quality of life. For these reasons a urologic evaluation should be undertaken in patients with persistent or worsening LUTS or urinary incontinence after all modalities of radiotherapy. Medical and surgical interventions can lead to resolution or improvement in both of these post-treatment urinary complications.