Urethral cuff erosion rates are highly variable, between 2 and 12 % in some series and depend on multiple factors [9, 11]. Patients at higher risk for erosion include those patients who have undergone radiation therapy, prior urethroplasty, multiple treatments for bladder neck contracture, urethral stent placement, or prior history of erosion/infection with a previous AUS. Higher explantation rates have been seen in those patients with prior infection/erosion, prior urethral stent, and those who had a 3.5 cm cuff [8, 11]. Some surgeons suggest that the higher rate of erosion with use of the 3.5 cm cuff may be due to a prior history of radiation, with 21 % of a radiated cohort experiencing erosion versus 4 % in those not radiated [12]. Prolonged urethral catheterization following AUS placement, defined as greater than 48 h, has also been associated with increased erosion rates [9]. Systemic disease states such as hypertension and coronary artery disease have been implicated as well, as these disease states portend vascular insufficiency, which may lead to tissue breakdown and ultimate cuff erosion [11]. While rare, pelvic or scrotal surgery for other causes might result in delayed erosion of the control pump, tubing, or reservoir (see Fig. 6.2). This scenario is managed just like an infected artificial sphincter by explanting the entire device and re-implanting it 3–6 months later. 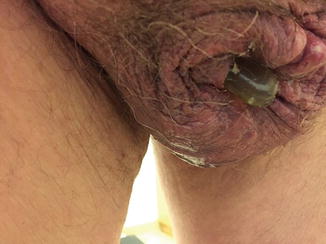 Control pump eroded through scrotum
Erosion may be prevented by minimizing prolonged catheterization and urethral instrumentation, meticulous surgical technique, and delayed activation [9, 11]. Patient education is also important in helping to limit urethral instrumentation and prolonged catheterization. Patient brochures, wallet cards, and necklaces or bracelets with medical information help to prevent inadvertent urethral catheter placement prior to deactivation of the urethral cuff. Deactivating the cuff at intervals, especially at night, may help decrease rates of urethral erosion, and may be helpful in the high-risk patient [11].
Reimplantation of the sphincter usually occurs between 3 and 6 months post procedure [11, 13]. Follow-up cystoscopy is recommended prior to AUS replacement [11]. Some surgeons advocate for immediate urethral repair at the time of explantation, as urethral stricture may result at the site of erosion. Rates of stricture formation were found to be 38 % after in situ urethroplasty, as compared to 85 % in those managed with Foley catheter alone [13]. Transcorporal placement of at the time of AUS replacement may help in those patients who have had prior erosion. This has been repeatedly shown to be safe in patients with severely compromised urethras, including those with prior urethral insults [8]. Functional outcomes have been excellent, with 84 % of patients reporting 0-1 pad per day use [14]. However, it is associated with higher rates of postoperative erectile dysfunction and postoperative urinary retention [15]. Other alternatives have included urethral wrapping with xenograft such as small intestinal submucosa [16]. Although the case series are small, good functional outcomes have been reported [8, 16].
The 3.5 cm urethral cuff is the smallest and newest available cuff for the artificial urinary sphincter. The initial series by Hudak et al. showed similar explantation rates for erosion and infection for patients undergoing the 3.5 cm cuff in 67 patients. Most of these patients had undergone prior urethral surgeries and radiation [17]. The 3.5 cm cuff has been associated with higher erosion rates as previously mentioned in a recent prospective trial on multivariate analysis [8]. Those patients undergoing reimplantation following urethral erosion tend to have good continence outcomes, with over half reporting 0-1 pads daily [11]. However, these patients do have a fourfold higher rate of future erosion so patients must be counseled to this effect [11, 18].

Persistent or recurrent incontinence is a common presentation post-AUS to the urologist with multiple etiologies. Efficient and appropriate evaluation of the patient and device will help determine the next most effective modality of treatment.

In those patients that report immediate leakage after activation of the AUS, typically at the same level to that experienced prior to implantation, device malfunction—although rare this early—should be ruled out. If patients have irritative symptoms, hematuria, or signs of infection, then erosion should he high on the differential diagnosis. Other potential causes may include: improper operation of the pump, urinary tract infection, occlusion of the tubing, or improper cuff sizing [19]. Improper operation results from a failure to fully deflate the cuff which may result in overflow incontinence. The pump may also be inadvertently deactivated by the patient, leading to persistent incontinence. If the pump is not placed in the proper location in the scrotum, the pump may be accidentally compressed while sitting, leading to unintentional cuff deflation [20]. Patient education is essential at the time of activation to help prevent this from occurring.
Detrusor overactivity or underactivity may appear de novo following prostatectomy. It may be associated with a urinary tract infection, and therefore urinalysis and urine culture may be helpful to rule out this as a potential source. Leach et al. noted only 40 % of patients had pure stress incontinence as the etiology of their post-prostatectomy incontinence. The remaining 60 % had some aspect of bladder dysfunction, which was aided with urodynamics [21]. The exact mechanism of action behind new onset changes in detrusor function is unknown. Chung et al. evaluated the urodynamics of 264 patients with bladder dysfunction following radical prostatectomy and noted detrusor underactivity in 108 (45 %). Minimally invasive prostatectomy was the only factor predictive of detrusor underactivity on univariate analysis [22]. Possible etiologies include decentralization of the bladder caused by mobilization at the time of prostatectomy, infection, inflammation or wall remodeling from fashioning the bladder neck at the time of anastomosis [23]. This may be evaluated with urodynamics after infectious sources have been ruled out. Anticholinergics may help to alleviate these symptoms if related to detrusor overactivity.
Improper sizing of the cuff frequently leads to decreased but persistent incontinence. This sizing tends to be related to surgeon experience, with a decrease in reoperative rates seen with a rising number of AUS performed annually. A study by Sandhu showed the risk of reoperation to be 24 % in those patients with five prior cases, decreasing to 10.7 % with those surgeons having performed more than 200 implants [24]. The pressure regulating balloon may also need to be evaluated to ensure that there is an appropriate level of fluid in the reservoir. Multiple techniques, including downsizing of the cuff, placement of a tandem cuff, placement of a transcorporal cuff, or placement of a higher pressure pressure-regulating balloon are available to improve persistent urinary incontinence. The decision to change just a component (e.g., just changing the urethral cuff when downsizing) versus replacing the entire device is dependent on time from initial implantation. Most authorities will replace the entire device with appropriate component modification if the initial device was placed more than 2 years prior.

Device malfunction rates increase with the life of the AUS. Clemens et al. noted a 50 % freedom from reoperative rate at 5 years with a cuff reoperative rate of 60 % in the same time period [2]. Another study showed a device survival rate of 66 % at 10 years [25]. The incidence of mechanical dysfunction has decreased significantly since the introduction of the narrow-back cuff in 1987, decreasing the rates from 21 % to 7.6 % in a single center study of 323 patients [4].
Device failure typically presents with sudden onset of recurrent urinary incontinence [6, 10]. Management of device failure is dependent on the time since AUS implantation. For failures soon after placement, other pathologies, such as bladder neck contracture, erosion, or bladder pathology should be ruled out. This is best done with cystoscopy. Once those etiologies have been ruled out, the sphincter itself should be evaluated. Ensuring that there are appropriate levels of fluid has been included in algorithms for troubleshooting previously, but there has been debate how to appropriately evaluate this [10]. Physical exam may reveal a pump that feels empty or cycles quickly; however, this has been shown to not be as sensitive as imaging [26]. Initially all AUS reservoirs were filled with dilute contrast and a plain-film abdominal X-ray was sufficient to evaluate the volume of the reservoir balloon. This remains an option according to the most recent AMS Operating Room Manual [26]. Injectable saline is now the preferred option for the filling of the AMS800 and renders plain-film X-ray ineffective for reservoir evaluation. Cross-sectional imaging is the current mainstay in noting the volume of fluid in the pressure regulating balloon. In particular, ultrasound has been reported to be useful and spares the patient radiation exposure that may be experienced with CT scan. Brucker et al. reported 100 % sensitivity when using office-based ultrasound to evaluate fluid volume [26]. If this is performed outside of the office setting, discussion with the radiologist is essential to ensure appropriate visualization and measurement of the reservoir. Figure 6.3 shows examples of formal limited pelvic ultrasounds performed to evaluate volume of the pressure-regulating balloon (Fig. 6.3 is an example of sonogram and CT scan with unfilled PRBs). A rough rule of thumb is that the diameter of the balloon should not be less than 3.8 cm, which corresponds roughly to 24 mL of fluid. Some practitioners advocate for use of electrical conductance testing to identify the faulty component and site of the leak at the time of operative revision [10, 20, 26].

(a) Limited pelvic ultrasound with deflated cuff; (b) CT scan showing deflated cuff (within shaded oval)
In cases of device failure, the most common site of failure, defines as leak of urine on filling the component, is usually the urethral cuff. Some authorities will only replace the entire AUS device if the original was placed more than 3 years prior. Some practitioners will keep the pressure regulating balloon in place at the time of revision, placing a second reservoir on the contralateral side [27, 28]. They report a rate of infection similar to those with all components removed, 1.8 versus 1.5 %, respectively [27]. An ohmmeter has also been used to only revise the components with the leak [20]. However, if the leak is small, there may be false negative testing, resulting in the need for further revision. We advocate removing and replacing the entire device, regardless of when the initial device was placed, if there is a fluid leak in the system, diagnosed by imaging that demonstrates decreased amount of fluid in the pressure-regulating balloon. This is because of the fact that there has been, by definition, communication between the fluid within the hydraulic system of the artificial urinary sphincter and body fluids.
Only gold members can continue reading. Log In or Register to continue