The presacral venous plexus with communicating veins and basivertebral veins (With permission from Mayo Foundation for Medical Education and Research. All rights reserved)

The overall incidence of vascular injury during pelvic operations is low (~1–2.3 per 100,000) [7, 8]. Dissection planes are often readily apparent in the normal patient; however, body habitus, previous surgery, large tumors, inflammation, radiation, and other factors may alter them and make these planes more difficult to discern. Adequate preoperative preparation, complete understanding of anatomic relations within the pelvis, along with meticulous surgical technique and appropriate exposure, is essential to limit the risk of pelvic hemorrhage.

Key Concept: Appropriately and completely evaluate the patient preoperatively and attempt to anticipate and plan for patients that may have an increased risk of bleeding.
The patient must be appropriately screened and examined preoperatively. Among the goals of this evaluation is to identify any comorbid condition that may influence the operative outcome. Within the context of bleeding, the patient must be screened in terms of their hematologic system – in particular, examining for any acquired or congenital coagulopathy (from inherited/acquired platelet disorders, factor deficiency, organ dysfunction, medications, etc.). In addition to a complete medication administration history, any prior kidney or liver dysfunction or malnutrition may impact the body’s ability to form clot. Routine coagulation studies should be carried out prior to any procedure with the potential for blood loss. If a patient has an identified coagulation disorder, perioperative management of this may be best managed in concert with a hematologist.
Certain other patient factors may portend an increased risk of intraoperative hemorrhage. The re-operative pelvis requires a number of particular considerations. The surgeon must realize that anatomy may be altered or displaced secondary to adhesions and fixation of structures, including vasculature. Large, vascular tumors may pose a significant challenge for the surgeon [9]. Preoperative planning and potential coil embolization in these cases may temper the risk of intraoperative hemorrhage during resection. An intralesional resection may even be necessary in large tumors that may distort the anatomy, although in cases of malignancy this would be oncologically inappropriate [10].
Preoperative radiotherapy can increase the risk of bleeding compared to non-radiated cases [11]. Radiation therapy can lead to fibrosis and scarring, making identification of, and dissection in, appropriate tissue planes difficult. Tissues may become fixed and immobile, increasing the risk of inadvertent injury.
Limited literature exists concerning the characteristics and management of operative vascular injury. Oderich et al. have published a retrospective review spanning 18 years from the Mayo Clinic examining iatrogenic operative injuries of the abdominal and pelvic venous system. Of the 44 venous injuries identified, 30 involved the pelvic vasculature (most commonly, the external iliac vein). Perioperative mortality was 18 %, all attributed to the venous injury [7].

Key Concept: Maintain adequate exposure (do not compromise safety for cosmesis) and have meticulous surgical technique.
Secondary to preoperative patient preparation, operative conduct is important in preventing hemorrhage. Adequate exposure and meticulous surgical dissection are essential. For open operations, a generous incision should be made to adequately visualize the anatomy. Laparoscopic or robotic approaches may improve visualization and dissection, particularly in a narrow pelvis, but control of hemorrhage once it occurs may be technically challenging.
Fundamental surgical principles of tension and counter-tension facilitate the identification and dissection in avascular planes. Eight avascular planes and spaces within the pelvis have been previously described (Table 19.1) [12]. Dissection within these spaces can be expeditious and is generally safe (Fig. 19.2). When performing proctectomy, bluntly dissecting the posterior mesorectum from the sacrum with one’s hand has been reported to be a common cause of presacral venous trauma and, in general, should be avoided [4].

Avascular planes and potential spaces of the pelvis 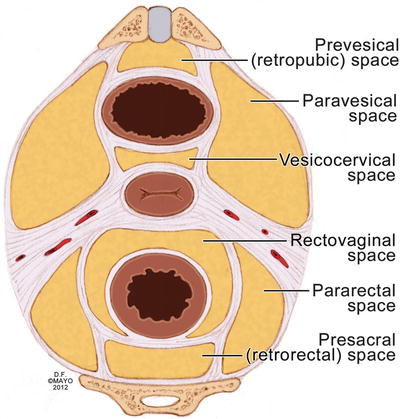 The eight avascular planes of the pelvis (With permission from Mayo Foundation for Medical Education and Research. All rights reserved)

Key Concept: Stay calm, have a stepwise algorithm for approaching various bleeding scenarios, and use the techniques you are comfortable with.
When a significant vascular injury occurs or brisk bleeding is evident, rapid and purposeful action must be taken to achieve control. Fundamental to achieving this is maintenance of composure and calm for the surgeon. Equally important is open communication with the anesthesiology team to alert them of significant hemorrhage so that more intensive monitoring can be initiated (hemodynamics, blood loss, urinary output, etc.) and blood products can be acquired from the blood bank. Methods of hemorrhage control include manual compression, electrocautery [13], vascular ligation, suture repair, use of topical coagulants [14, 15], damage-control techniques [5], and radiologic intervention. Whichever method is utilized, evacuation of blood from the operative field and securing adequate exposure of the bleeding site is imperative to accurately identify the source. Caution must be taken to protect vulnerable structures in the vicinity of the bleeding source as proximal and distal control is achieved, if possible.
The initial maneuver in controlling bleeding is often simple packing of the pelvis with laparotomy sponges. Laparoscopically, a smaller sponge, such as a Ray-Tec, may be inserted through a 10/12 mm port and used to clear field or tamponade low-volume bleeding. In many cases of low-pressure, low-volume bleeding, the hemorrhage will readily cease. Clips (or sutures) on visible presacral vessels may be feasible and must be placed on both sides of the vessel. Sometimes further mobilization of the rectum or surrounding structures is necessary in order to adequately visualize the bleeding point. Other unique and novel techniques have been described with varying success to halt presacral hemorrhage that could not be stopped with more conventional means (packing, electrocautery, suture ligature, clamping).
Many topical hemostatic agents have been described [14]. In our practice bone wax, gelatin foams (Gelfoam), oxidized cellulose (Surgicel), and thrombin with gelatin (FloSeal) are most commonly used. Bone wax exerts its effect through occlusion of bleeding orifices. This is not absorbed by the body and may become a nidus for infection [16]. Gelatin foams and oxidized cellulose act by providing a matrix for the initiation of coagulation [17, 18]. These are best used to control small vessel bleeding and are absorbed by the body within weeks. Thrombin with gelatin requires contact with blood to serve as the source for fibrinogen and can achieve reasonable control of moderate arterial bleeding [19].
Argon plasma coagulation is another thermal method of coagulation. In this modality, argon gas is ionized and used to deliver thermal energy to tissue adjacent to the probe with limited depth of penetration (2–3 mm). If readily available, this may be an effective tool.
The use of titanium thumbtacks inserted into the bleeding orifice of the sacrum has previously been reported (Fig. 19.3) [4, 20]. These thumbtacks, however, may not be readily available and a rare complication of erosion through the bowel wall has been reported [21]. Harrison et al. [22] reported on eight patients with massive bleeding treated with muscle fragment welding technique (Fig. 19.3), initially described by Xu in 1994 [23]. In this method a segment of rectus abdominis muscle is harvested from the patient’s incision and placed over the bleeding region. Electrocautery on maximum is then applied to a forceps holding the muscle in place to “weld” the bleeding site. In all of these patients, hemostasis was successfully achieved after initial attempts at control via tamponade failed. Remzi et al. [24] describe securing a patch of harvested rectus abdominis to the bleeding point with absorbable sutures. While successful in their reported patients, suturing in a narrow, bleeding pelvis may be technically difficult and time consuming. 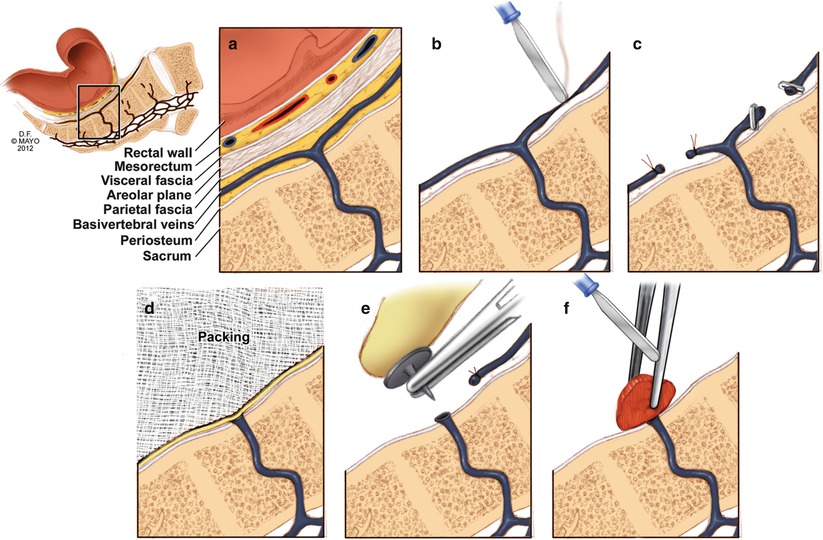 Methods for control of hemorrhage. (a) Normal presacral venous plexus anatomy, (b) electrocautery, (c) suture ligature or clipping of transected vessels, (d) pelvic packing, (e) thumbtacks inserted into the sacrum, and (f) muscle welding (With permission from Mayo Foundation for Medical Education and Research. All rights reserved)
Other open surgical methods reported include the use of secured hemostatic sponges [1, 15], tissue expanders [25, 26], and saline bags [27]. Van der Vurst et al. [1] recently described the use of an endoscopic helical tacker to secure a sponge of Surgicel over the bleeding sacrum, thus eliminating the space beneath and providing tamponade. Tissue expanders and saline bags employ the same concept as packing in arresting hemorrhage. Proponents of these methods suggest that advantages include the ability to perfectly fit the concavity of the sacrum, the ability to increase the hemostatic pressure by increasing the fluid infused, and the potential ability to remove the devices at bedside, under local procedures [27]. While each of these alternative methods is reportedly effective, it is of our opinion that the simplest and most expeditious method that the operative team is comfortable with is initially chosen.
Only gold members can continue reading. Log In or Register to continue