Typical appearance of a bladder neck contracture on cystoscopic evaluation. There is a well defined annular scar at the level of the urethrovesical anastomosis 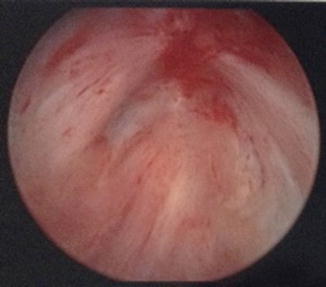 Bladder neck contractures may also be obliterative. There is no visible lumen on cystoscopic evaluation of this bladder neck

This evaluation is generally sufficient for a clear-cut case of obstructive urinary symptoms and a cystoscopic evidence of anastomotic contracture. However, if there is concomitant stress or urge urinary incontinence urodynamic testing allows assessment of bladder overactivity and recruitment of abdominal musculature for voiding [24].

Several authors have described algorithms for treatment of BNCs which generally progress from less invasive endoscopic management to open reconstruction [25, 26]. Management may include simple dilation, optical internal bladder neck incision, transurethral resection of the stricture and finally open surgical reconstruction of the bladder neck.
Initial management of BNC is generallyurethral dilation . A single dilation or urethrotomy successfully manages BNC in 24–73 % of patients [15]. This may be performed by filiform and followers, Van Buren sounds, or balloon dilation in the office (Fig. 7.3) [20, 27]. Some authors have favored balloon dilation for initial treatment of BNC [28, 29]. Ramchandani et al. reported a 59 % success rate with initial balloon dilation with no subsequent urinary incontinence. Serial dilation may be combined with a schedule of self-catheterization to maintain bladder outlet patency [17, 25]. Park et al. reported a regimen using dilation with Nottingham dilators to 18 French followed by a 3 month self-dilation regimen [17]. 73.1 % of the patients were successfully managed with this regimen with one or two dilations followed by self-catheterization. However, dilations are uncomfortable for patients, may cause trauma to the bladder neck, and may be a source of infections. Furthermore, patients with urethral strictures performing self-catheterization have been reported to have a significant decrease in quality of life [30]. Moreover in patients with concomitant incontinence who may need AUS placement, intermittent catheterization should be avoided due to concern for erosion. Thus, other options for management of refractory BNC are desired. 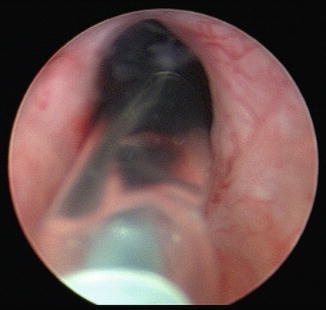 This is the cystoscopic appearance of a balloon dilator passing through a bladder neck contracture
More aggressive intervention with bladder neck incision or bladder neck resection has been suggested for refractory BNC [18, 20, 27]. Generally, bladder neck incision involves incision of the scar at 3, 9, and in some instances, the 6 o’clock position. There is some variation based on surgeon preference. However, the optimal modality for transurethral incision of bladder neck is unknown.
Cold knife urethrotomy has success rates as high as 25–87 % for uncomplicated cases [27]. Dalkin et al. advocated for urethrotomy using the cold knife urethrotome at the 4 o’clock and 8 o’clock positions at the level of the scar down to bleeding tissue [20, 24]. Foley catheter was left for 72 h after the urethrotomy. If the scar appeared immature at initial presentation, they recommended initial dilation with filiform and followers followed by urethrotomy once the scar was mature. The same group later reported their long term follow-up: at a mean follow-up of 30 months, repeat urethrotomies were required in 17 % of patients [24]. Using a continence questionnaire they established that continence rates between the urethrotomy patients and control patients were also not statistically different. Cold knife urethrotomy may be used as a primary treatment or secondary treatment when dilation fails.
Electrocautery or “hot” knife incision has also been used for bladder neck incisions generally have been used for denser strictures refractory to prior endoscopic management. Ramirez et al. reported a technique in which intraoperative balloon dilation of the BNC is followed by deep lateral incisions with Collings knife at 3 and 9 o’clock (Figs. 7.4 and 7.5) [26]. This allows passage of the resectoscope proximal to the bladder neck prior to performing bladder neck incisions, which allows incisions to be directly visualized and incised deeply. Most of their patients (78 %) were refractory to prior endoscopic management. The authors reported a 72 % success rate on initial TUIBNC at a mean follow-up of 12.9 months. 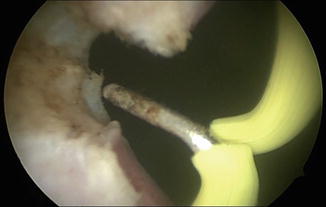 Balloon dilation of the bladder neck contracture allows passage of the resectoscope into the bladder. The bladder neck contracture is further opened using deep lateral incisions with Collings knife at 3 and 9 o’clock
Laser urethrotomy has been advocated due to ability to achieve precise incisions and achieve hemostasis [31, 32]. In particular, the Ho:YAG laser is thought to be advantageous for urethrotomy due to its shallow tissue absorption of less than 0.5 mm [25]. This minimizes the effect of the laser on surrounding tissue thus decreasing the risk of scar formation. Lagerveld et al. used Ho:YAG laser to make a deep incision at the bladder neck at 6 o’clock followed by vaporization of scar tissue from the 3 to 9 o’clock positions in 10 patients. At a mean follow-up of 18 months (range 3–29 months) no patients needed treatment for restenosis. Other authors reported the use of the Ho:YAG laser for BNC refractory to multiple prior endoscopic interventions [32]. While the number of patients in this case series was small (three), they reported successful treatment at a follow-up of 11–37 months.
Transurethral resection of bladder neck has been suggested for longer strictures resistant to other endoscopic intervention [33]. However, the risk of incontinence is may be high [18]. Surya et al. found that three of four patients undergoing bladder neck resection had subsequent incontinence. Popken et al. conversely reported successful resection of scar without incurring increased risk of incontinence [23].
Several different techniques have been suggested when the vesicourethral junction is obliterated. Combined antegrade and retrograde recanalization with a stiff guide wire has been used with various modalities including cold knife, electrocautery and laser used to core out the lumen [34, 35]. Carr and Webster described a technique in which a sternal wire was guided from the urethra into the area of the bladder neck under vision via antegrade cystoscopy. Once the wire was in the correct location, cold knife incisions were used to regain urethrovesical continuity. While all four patients were able to regain urethrovesical continuity, three of the four patients required self catheterizations to maintain patency for the long term.
Roughly one-third of BNCs may be refractory to three or more attempts at endoscopic treatment [15]. Given the difficulty in managing refractory BNCs, some have advocated combining bladder neck incision with injection therapy with antiproliferative agents such as triamcinolone or mitomycin [36, 37]. Eltahawy et al. reported a technique in which holmium laser was used to perform transurethral incision of the bladder neck with subsequent injection of triamcinolone at the incision sites. They reported a 83 % success rate at a mean follow-up of 24 months (range 6–72 months) [36].
Mitomycin C has also been used as an adjunct to internal urethrotomy for recalcitrant BNC [37]. The Lahey clinic reported a technique in which cold knife incisions of bladder neck were performed followed by injection of mitomycin C. At a median follow-up of 12 months, 72 % of the patients had a stable, open bladder neck after one procedure; 22 % of patients required repeat procedures to stabilize their bladder neck.
Some authors have advocated endoscopic management coupled with placement of permanent intraurethal stents (UroLume™) in BNCs resistant to endoscopic management only [7, 25]. The UroLume™ Wallstent was a stainless steam tubed mesh which allows for epithelial ingrowth, theoretically preventing migration, infection, and encrustation, which was initially reported on the use for urethral strictures by Milroy [38]. The placement of the UroLume stent interfered with sphincter function and thus jeopardized continence; therefore several authors advocated with UroLume™ placement at the bladder neck followed by artificial urinary sphincter placement. There are well known complications: stent migration, perineal pain, hematuria, stent encrustation, and growth of obstructive hyperplastic tissue [39, 40]. However, initial studies reported a high success rate with one study reporting a 89 % patient satisfaction rate at a mean follow-up of 17.5 months [40]. Anger et al. reported the UroLume as a reasonable option to offer patients with recurrent BNC to avoid chronic indwelling catheter or more invasive options such as urinary diversion or open reconstruction [25]. However, longer follow-up has revealed a high rate of complications [41, 42] with Magera et al. reporting a much lower success rate of 52 % at initial stent insertion [43]. Erickson et al. reported a 53 % stent specific reoperation rate [42] and suggested that stents only be offered in patients who did not desire or were medically unfit for open reconstruction. The UroLume stent is no longer commercially available in the United States.

When above treatments fail, the patient should be considered for revision of the vesicourethral anastomosis if they are medically fit to endure surgery. Multiple attempts at endoscopic management may result in complex dense, long, or obliterative strictures. Existing reports of revisions of vesicourethral anastomosis are from high volume reconstruction centers and abdomino-perineal, transpubic, and transperineal approaches have been described [12, 29, 44]. Incontinence after anastomotic revision is the norm rather than the exception and a plan for management of incontinence, whether in synchronous or staged fashion, should be in place.
The transperineal approach start with a perineal incision for mobilization of the urethra up to the level of stricture where the urethra is transected and all scar tissue is excised until only healthy tissue remains. Maneuvers such as separation of the crura or inferior pubectomy may be performed to allow access to the bladder neck. Mundy and Andrich prefer a strictly transperineal approach and reported success in 88 % of the patients without a history of radiation [12]. The remaining patients underwent a second revision with good results. Of note, radiation decreased success rates substantially to 66 %. All reconstructed patients subsequently required AUS placement.
Simonato et al. described a “pull through” method using a combined perineal and suprapubic approach [45]. In this approach, after the urethra is mobilized perineally, the bladder is punctured suprapubically and the tract dilated to accommodate an Amplatz sheath. The suprapubic access is then used to insert a sound over a guidewire into the bladder neck which identifies the proximal extent of stricture. Once the strictured segment is excised and the urethra prepared, sutures placed on the proximal stump of the urethra are pulled into the bladder neck via the suprapubic access. A catheter is placed and sutures are placed in the paraurethral fascia and vesicourethral anastomosis to create a watertight anastomosis. Ten out of 11 patients required AUS placement 6 month after their bladder neck reconstruction for complete incontinence.
Theodorou et al. described their abdomino-perineal approach in which an abdominal incision is made in addition to the perineal incision to assist with mobilization of the bladder and urethra from above [46]. Scar was excised from both perineal and abdominal approaches. The bladder was mobilized from the abdominal incision and advanced to meet the urethra, which was brought in from the perineal route. Concomitant ileocystoplasty was performed if required, for bladder overactivity resistant to medical treatment. All patients underwent simultaneous AUS placement. At mean follow-up of 24.42 months, five patients were able to void well without obstruction while one patient required clean intermittent catheterization to empty his augmented bladder.
Wessells et al. described the experience at the University of California, San Francisco (UCSF) and emphasized the need for an approach tailored to the anatomy of the individual patient [44]. They described varied approaches in four patients with BNC refractory to endoscopic management. One was an abdomino-perineal approach where the urethra was mobilized perineally but a cystotomy was necessary to appropriately visualize the anastomotic suture placement. While the perineal approach is similar to urethroplasty for posterior urethral disruption, prior prostatectomy causes fibrotic changes that make the bladder less mobile than in posterior urethral disruption, necessitating the additional abdominal approach for bladder mobilization in select cases [44]. Pubectomy was performed in two patients, one in whom a urethropubic sinus required excision and another in whom pubectomy facilitated exposure for the formation of a bladder tube to anastomose to the urethra. In an update of their experience, they suggested that pubectomy was helpful in strictures longer than 2 cm [47]. One patient had a long stricture from radiation, salvage prostatectomy, and multiple endoscopic interventions. He underwent a reconstruction via a perineal approach with a penile fasciocutaneous flap ventral onlay. The varied approaches for each patient emphasize the need to tailor treatment to the individual.
Only gold members can continue reading. Log In or Register to continue