Anastomotic leaks instigate inflammation and pelvic sepsis, which leads to fibrosis, with a stricture being the end result [5]. An increased risk for stricture formation exists for anastomoses created after resection for an inflammatory process, such as diverticulitis and IBD, because inflammation itself is a risk factor for stenosis [6]. Other independent risk factors associated with anastomotic leaks include anastomoses <10 cm from the anal verge, ligation of the inferior mesenteric artery distal to the left colic artery (“low” ligation), male sex, intraoperative complications, and general patient comorbidities. In fact, both diabetes and atherosclerosis have been identified in small studies as significant risk factors for impaired local blood flow and thus anastomotic leaks [7].
A correlation has been found between CRA strictures and failure to mobilize the splenic flexure and “low” ligation of the inferior mesenteric artery and vein [8]. In order to provide complete splenic flexure mobilization to allow maximum reach for CRA and CAAs, and a tension-free anastomosis, the inferior mesenteric vein should be ligated proximally at the inferior border of the pancreas (Fig. 33.1) [9]. Hiranyakas et al. found that 90 % of patients with CRA strictures had a nonmobilized splenic flexure and intact inferior mesenteric vessels; these data support the necessity to fully mobilize the left colon and splenic flexure [8].

In order to provide complete splenic flexure mobilization to allow maximum reach for CRA and CAAs, and a tension-free anastomosis, the inferior mesenteric vein should be ligated proximally at the inferior border of the pancreas
Adequate blood flow at the anastomotic site is also imperative to prevent anastomotic strictures [5]. If the terminal end of the bowel has questionable blood flow, it should be resected until acceptable flow is present. Clinical indicators implying adequate blood flow may be assessed with evaluation of the color of the mucosa, bleeding at cut bowel edges, and palpable pulses within the vasculature. Doppler and fluorescence imaging are other modalities that can aid in the assessment of blood flow at the anastomosis. It has been demonstrated that the transverse and descending colon have increased measured oxygen tension, whereas oxygen tension is diminished in the circumstances when the sigmoid is utilized for the anastomosis. Thus, the sigmoid is a suboptimal choice for routine anastomosis [10].
The best method of creating the anastomosis (stapled versus hand-sewn) continues to be a debated topic. While stapling allows for a reduction in operative time, ease of use, and decreased blood loss, some small studies illustrate higher rates of complications with stapled anastomoses [6]. Higher levels of collagen deposition and inflammation in the stapled anastomosis correlate with a higher stricture rate [6]. Reports of increased stricture rates in low stapled anastomoses with fecal diversion suggest that stapled anastomoses may “require” the dilation effect from the passage of stool [4]. Some clinicians also believe that they have more control of the shape and caliber of the anastomosis when the anastomosis is performed hand-sewn, thereby decreasing the risk of anastomotic stricture. Of note, a 2012 Cochrane meta-analysis review noted that stapled and hand-sewn anastomosis were equivalent in all categories except stricture formation [11]. The frequency of stricture was significantly higher with stapling than hand-sewn technique ( p < 0.05) (Table 33.2).
Table 33.2

Factors predictive of anastomotic stricture include patient age, obesity, smoking status, and relevant comorbidities including diabetes [12]. Obese patients undergoing ileo-anal pouch anastomosis were found to have an increased rate of overall complications (80 versus 64 %) compared to nonobese patients, with stricture being a specific increased complication (27 versus 6 %) [13].

Anastomotic strictures typically present 2–12 months after surgery [4] with symptoms such as constipation or watery diarrhea, pain, cramps, fractionated evacuation, abdominal distention, leakage, or feelings of incomplete evacuation [6]. In cases where the indication for the initial resection was malignancy, it is essential that local recurrence of the cancer be ruled out. Initial studies performed should include carcinoembryonic antigen (CEA level), hypaque enema, contrast CT for colon primary or MRI for rectal primary, and a positron emission tomography (PET) scan in the setting of patient with an elevated CEA. Ultimately, a colonoscopy with biopsy is mandated [4]. A stricture that is not responsive to repeated dilation requires repeat biopsy and a high level of clinical suspicion [14].
Strictures are more common when the anastomosis is distal, with rectal strictures being the most frequent [3, 8]. It is crucial to eliminate technical risk factors (rotation, ischemia) as well as tension (especially operations that require an anastomosis within 15 cm of the anal verge). Patients with a diverting stoma created at the initial resection may develop a soft stricture or even heal the lumen closed. A digital exam 4–6 weeks postoperatively or prior to closure of the diverting stoma relieve those strictures, which are often much softer and easier to dilate early in the postoperative course [4]. Similarly, patients with a low rectal anastomosis require a digital examination in addition to a hypaque enema prior to diverting ileostomy closure (Fig. 33.2). If a tight, firm stricture is present, intraoperative dilation with Hegar dilators may be performed in conjunction with loop ileostomy closure. It is occasionally necessary to place a flexible scope through the distal limb of the loop stoma to guide placement of a guide wire, using Seldinger technique, through the center of the strictured anastomosis. This guide wire can then be used to guide a dilator through the stricture. The light of the scope from proximal to the anastomosis targets the center of the anastomosis when viewed from the distal aspect of the anastomosis. 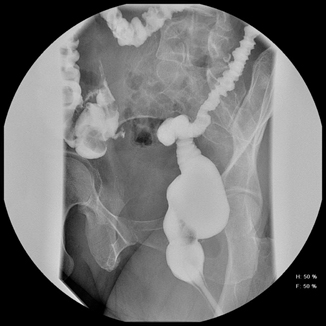 It is often possible to treat the early stricture in the office with a long cotton-tipped sigmoidoscopy swab passed through the rigid proctoscope. Up to three swabs can be passed through the central gap in the stricture. The swabs are then pulled through the stricture as a group, with gentle traction, while the ends are held to the same level at the outer end of the proctoscope. This stretch effect then allows the 23-mm diameter scope to be passed through the stricture to fully fracture the scar.
In most circumstances, endoscopic balloon dilation remains the first-line therapeutic modality for the treatment of benign colorectal strictures. The success of endoscopic dilation lies in its simplicity and immediate efficacy in up to 80 % of cases [15]. However, patients often require sequential dilations with larger balloons over two to three endoscopic sessions to achieve long-term success [15]. Recurrence after balloon dilatation can range from 30 to 88 % [16]. Recurrence of the stricture is often the result of tighter strictures being inadequately or inappropriately dilated [17]. Of note, most data on the efficacy of balloon dilation report only on subjective symptom relief [16]. While symptom relief is important, quantifiable data such as stricture size can provide more objective data as to the success of balloon dilation. Kim et al. reported a defined protocol for balloon dilation consisting of single and double balloon dilation, with improvement in 74 % of patients after 1 month and complete improvement in 86 % of patients after 5 years. Only 5 % required repeat dilation with an average increase in the stricture diameter of 50 % [16]. With this technique, fluoroscopic guidance is used and the patient is awake and not anesthetized. A 20-mm balloon catheter is passed over a guide wire and filled by hand pressure until the waist on the balloon disappears. The pressure is maintained for 1 min. If no blood or pain is present, a second 10-mm balloon catheter is inserted adjacent to the existing balloon and both are inflated simultaneously. This protocol reportedly reduced recurrence rates to 7 % at 1 year, and 10 % at 5, 7, and 10 years. As mentioned prior, dilation can also be performed digitally, with flexible bougies or metal dilators (Hegar, Eder-Peustow); however, it is important to keep in mind that balloon dilation has the advantage of producing controlled incremental radial pressure.
< div class='tao-gold-member'>
Only gold members can continue reading. Log In or Register to continue