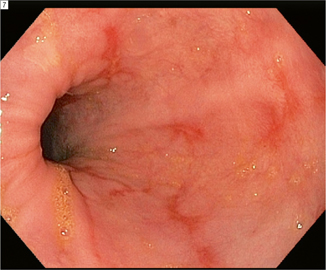 The occasional patient complains of profound reflux pain in the early postoperative period. More often, symptoms evolve a year or more after the index operation. A symptom complex of nausea, pain, and bilious emesis is characteristic but, by no means, specific to bile reflux. As with gastroparesis, other more common etiologies must be excluded. Cross-sectional imaging or dynamic upper gastrointestinal contrast studies are useful for excluding mechanical obstruction. The former can rule out fluid collections as well, more relevant in the early postoperative period. Upper endoscopy may identify marginal ulceration or mucosal irritation. Scintigraphy (bile reflux scan or HIDA scan) may be useful, particularly in determining a role for remedial surgery. An abnormal study is not that informative. A normal study, however, anticipates a poor response to surgical management.

A variety of pharmacologic agents have been utilized in the treatment of bile reflux; none are consistently effective. Sucralfate may buffer the stomach or gastric remnant and provide symptomatic relief and is often a good first choice. Cholestyramine has been advocated but is probably of little utility [19]. Promotility agents (e.g., metaclopromide) may have a role, particularly if a contribution of gastroparesis is suspected. Persistent symptoms over months despite pharmacologic intervention in the face of an abnormal bile reflux scan point to a role for remedial surgery.
In the patient with severe symptoms, objective signs of bile reflux (e.g., endoscopic evidence of gastritis, scintigraphy confirming duodenal reflux into the stomach) surgery can be considered. A variety of operative approaches can be utilized for the remediation of bile reflex. The most commonly chosen and most familiar is Roux-en Y gastrojejunostomy; however, Braun entero-enterostomy and the Henley procedure (antiperistaltic jejunal interposition) are reasonable alternatives (Fig. 12.3). If Roux-en Y reconstruction is selected, a limb in excess of 40 cm (some have advocated > 60 cm) should be constructed to maximize isolation of the stomach from duodenal secretions. Longer limbs (> 80 cm) should be avoided to decrease the risk of malabsorption and Roux stasis. Assuming careful patient selection, a high rate of success can be expected.

Isoperistaltic jejunal loop interposition. (Henley procedure)
The major disadvantage of Roux-en Y reconstruction is an incidence of “Roux stasis syndrome,” generally attributed to small bowel denervation and diminished prograde peristalsis in the Roux limb. Bacterial overgrowth, diarrhea, jejunal ulceration, and impaired protein digestion may result. Abdominal pain and vomiting are typical symptoms and there is often overlap with gastroparesis, as this syndrome is observed with greater frequency in patients with larger gastric remnants. These concerns may necessitate completion antrectomy or even subtotal gastrectomy, and truncal vagotomy at the time of remediation in the appropriate clinical setting.
While bilious emesis is mitigated by Roux-en Y reconstruction, a number of larger published experiences suggested recurrent symptoms in approximately 30 % of patients long term [20]. This substantial rate of long-term morbidity justifies consideration of other remedial approaches. Perhaps the simplest of these is creation of a Braun enteroenterostomy. This is most applicable in the setting of prior Billroth II construction and is achieved by side-to-side anastomosis of the afferent limb to the jejunum at least 40 cm distal to the gastrojejunostomy. Diminution of duodenal fluid into the stomach or gastric remnant can be achieved with the application of a staple line across the afferent limb just proximal to the gastrojejunostomy. Use of a thoracoabdominal (TA) stapler facilitates the creation of a partition without transection, and may, therefore, preserve prograde peristalsis through the small bowel. Importantly, this partition is temporary in most cases (recanalization is a likelihood over time). For this reason, this so-called uncut Roux may not be the best option in a younger patient for whom effective long-term remediation is necessary (Fig. 12.4).

“Uncut Roux” reconstruction
Interposition of an isoperistaltic segment of small bowel between the gastric remnant and duodenum was advocated by Henley in the 1950s for the management of dumping syndrome. The Henley procedure has been used with reported success for the treatment of Bile reflux. In the setting of prior Billroth II reconstruction, the afferent limb just proximal to the gastrojejunostomy is divided. The jejunum is divided 20–45 cm distal to the anastomosis at a point that allows for convenient anastomosis to the proximal duodenum. Jejuno-duodenstomy and downstream jejunojejunostomy are performed to restore continuity. This configuration has been associated with effective amelioration of biliopancreatic reflux on scintigraphic examination [21] and may result in less of the long-term morbidity associated with Roux reconstruction.

Gastroparesis and bile reflux after foregut surgery remain distinct clinical challenges. Both diagnoses require exclusion of other correctable surgical complications, particularly mechanical obstruction or undrained infection. Scintigraphic studies can be used to confirm either diagnosis. Even when the diagnosis has been secured, a trial of conservative management is almost always in order during which time attention to nutritional status, correction of metabolic disturbances, and reduction of narcotic exposure are critical. Pharmacologic therapies are associated with only modest benefit, but may be helpful in selected cases and are relatively safe. In the setting of persistent severe refractory symptoms, remedial surgery should be considered. In the case of gastroparesis, distal enteral feeding access with gastric decompression may be an appropriate intermediate step before subtotal gastrectomy. A role for gastric electrical stimulation is evolving. A variety of remedial operations for bile reflux have been used with moderate success including conversion to Roux-en Y reconstruction, Braun enteroenterostomy, and Henley jejunal interposition.

Although definitive data are lacking, antecolic reconstruction after pylorus-preserving pancreaticoduodenectomy may be associated with a lower rate of delayed gastric emptying compared to retrocolic reconstruction.
< div class='tao-gold-member'>
Only gold members can continue reading. Log In or Register to continue