Why Do Lesions Recur After Local Excision?

Key Concept: Under-staging, tumor biology, and technical factors all play a role in the development of recurrence following local excision for rectal cancer.
Reasons for “local recurrence” for local therapy of rectal cancer are fourfold. Oftentimes, these include:

Tumor implantation at the time of surgery
3.

Tubular lymphatic spread or persistence at the time of surgery
4.

A positive margin leaving a residual cancer (i.e., an R1 resection)
Local recurrence in these settings has more to do with local persistence of the cancer as the lymph nodes have not been treated either surgically or sterilized with radiation. The reasons for these issues being central to local recurrence of rectal cancer have to do with the challenge of local therapy. First, working transanally, it is difficult to gain adequate resection of the cancer. This must entail clearance distally, cephalad, and in the deep fashion. It is often difficult for the surgeon operating transanally to gain a good cephalad margin, and this is the main reason why the higher incidence of failure exists for transanal incision as opposed to other techniques. Additionally, in operating endoluminally with an intact cancer, there is a much higher risk of tumor implantation. The basic tenets of colon and rectal surgery are to exclude the cancer with a clamp or stapler and then irrigate and have your margin of resection at that point, distal to the clamp. Unfortunately, when operating within the lumen of the rectum with a live cancer in place, this is always a challenge and speaks of the need for irrigation of the operative field once the tumor is out with a tumoricidal agent. Third, lymph node resection in an endoluminal fashion can be carried out only for the few perirectal nodes that may be found immediately deep to the cancer itself. However, a real thorough mesorectal excision is never carried out using a traditional local excision or TEM/TAMIS/TEO approach. The last challenge, of course, is that of lymph node staging. The ability to identify which patients being operated on have lymph node metastases impacts markedly the way the patient is addressed. Any evidence of lymph node metastases should make you highly question the indication of a transanal approach—especially in the absence of combined modality therapy.

Key Concept: Distal lesions recur at higher rates and have overall worse survival.
In looking at matters of failure of treatment of rectal cancer more closely, the level of the cancer becomes of primary importance. Following radical surgery, Wibe in 2004 found the failure rate of low rectal cancers to be statistically significantly worse. In a study of over 2,000 patients, they demonstrated a statistically significant increase in local failure of cancers in the distal third of the rectum (0–5 cm level), with a 15 % local recurrence rate compared to a 9 % failure rate for tumors in the upper third of the rectum in the same study. This correlated with a significantly worse survival for cancers in the distal third of the rectum (59 % in the distal rectum vs. 69 % in the upper rectum and 62 % in the mid-rectum) [7]. The reason for this is not surprising and has to do with the issues brought up earlier. As one gets down further into the pelvis, it is more difficult to operate cleanly without compromising the lateral margins. Additionally, even when operating in the proper TME plane, the mesorectum is much thinner as the rectum prepares to traverse the sphincter mechanism, so the lateral aspect of the tumor, and the deep margin, would put a cancer cell directly against the levators, increasing the likelihood of failure. These same factors are in play when addressing a low rectal cancer transanally.

Key Concept: Accurate staging dramatically predicts lymph node positivity and guides proper selection of patients. Unfortunately, limitations with both MRI and ERUS make this more inherently difficult.
The next challenge for local therapy of rectal cancer has to do with lymph nodes. The best predictor for lymph node involvement, even in the year 2013, unfortunately, is still the tumor T stage. Controversy exists as to which T stages are appropriate for local excision techniques. Studies of patients undergoing proctectomy show disturbingly high rates of mesorectal node positivity: for a T1 cancer, nodal involvement ranges between 5 and 12 %; for T2 cancers, in the range of 17–25 %; and for T3 cancers, between 40 and 60 % (Table 14.2) [7–11].


This being the case, the clinician has predictably fallen back on staging mechanisms focused on evaluating T stage. Unfortunately, ERUS is our best preoperative imaging modality for determining node positivity, and it is only approximately 70 % sensitive. To date, endorectal ultrasound remains the gold standard, although as previously mentioned, more and more interest has been raised by excellent results by Gina Brown and her group looking at MRI studies of rectal cancer [12]. T stage accuracy has been reported between 80 and 90 % with N stage accuracy between 70 and 80 %. However, even noted by such distinguished experts as the late Doug Wong, “unfortunately, fine distinction between deep tumors of one T stage and early tumors of the next T stage … are often difficult to make. Additionally regional lymphatic involvement is often difficult to determine because endorectal ultrasound cannot detect nodes further away in the mesorectum or find micrometastatic disease in a perirectal lymph node” [13]. When one looks at a gross specimen on a radical resection after neoadjuvant therapy and TME resection, one can see why it is difficult to find small microscopic deposits that would reside in the perirectal fat or the muscularis propria (Fig. 14.1). It was Fidler who described “the metastatic decathlon” through which a primary cancer anywhere in the body, not just the rectum, liberated tumor cells created via a vascularity entrance into the bloodstream, interacting with the intravascular immunocompetent cells, gaining endothelial contact, and either taking a hold in the lymph nodes or proliferating and having metastases develop [14]. To detect scant cells in a lymph node that have completed this course remains a challenge for all staging strategies to date. 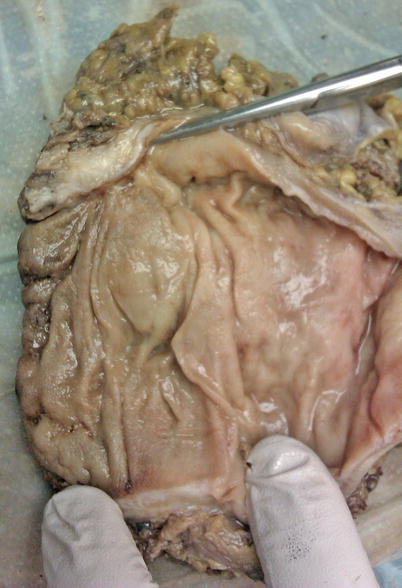 So Whom Should You Select for a Transanal Approach (for Cure)?

Key Concept: In general, T1 lesions with no evidence of lymph node metastases and good histopathological factors are the best patients. However, there will still be a small percentage of patients that will recur.
As we look at some of the larger trials of rectal cancer treated locally, we see alarmingly high rates of failure. Bleday and Steele in the late 1990s reported on 48 patients treated with full-thickness local excision and noted a 10 % failure rate in the T1 cancers and a 40 % failure rate in the T3 cancers. Fifteen percent of these patients developed some form of fecal fistula [15]. The CALBG group in 1999 reported on 110 patients treated locally with local excision for rectal cancer. The T1 cancers in that group had a 6 % failure rate and the T2 cancers a 14 % failure rate. Additionally, 15 % of the patients in this group had positive margins at the time of surgery [16]. Rothenberger in 2000 reported on 108 patients with rectal cancer treated locally from the University of Minnesota and showed an 18 % failure rate for T1 cancer and a 47 % failure rate for T2 cancer [17]. The University of Minnesota data was updated in 2005, showing 101 T1 cancers operated on with a 19 % local recurrence rate and 50 T2 cancers operated on with a 45 % local recurrence rate [18]. Additionally, the Cleveland Clinic reported on their failure rate in T1 cancers, and this showed a striking 29.4 % local recurrence rate in 52 patients with T1 cancers treated locally [19]. These experiences led the University of Minnesota to conclude in their paper that oncologic outcomes in T1 cancers may be compromised by local excision alone and that local excision alone is inappropriate for T2 patients for surgery (Table 14.3).


The Norwegian rectal cancer group reported their T1 cancers operated upon either radically or with local excision [20]. It is noteworthy that in 256 patients who had radical resection, as would be expected in these early cancers, there was 100 % R0 resection. An 11 % rate of node positivity was also found. The local failure rate in that group was 6 % compared to the 38 patients in the local excision group of which there was a 17 % R2 resection and a 12 % local recurrence rate. In looking at this data more closely, it is actually somewhat surprising that there was not a higher failure rate due to a high rate of positive margins. What is noteworthy is that the failure rate for local excision is nearly exactly the same as the node positivity rate for T1 cancers undergoing radical resection. Looking at the data regarding local recurrence rate and lymph nodes together, we see lymph node involvement in between 6 and 12 % in the radically resected groups, and the failure rate with local recurrence after transanal excision in these experiences remains between 6 and 29 %. The conclusion we have reached in evaluating this data is that there are two possibilities for this. One is the persistence of untreated cancer in the lymph nodes, and two is the disturbance of the specimen cancer with incomplete resection and handling of the tissue transanally resulting in implantation of tumor at the time of surgery.
So whom should you select for a transanal approach? This obviously is a complex question with no quick and easy answer. In general, the decision to pursue local treatment of rectal cancer has to do both with the patient’s comorbid conditions and the stage of the cancer. For a polyp with a small focus of cancer, this is an ideal approach for a full-thickness local excision. Patients with higher comorbidities such as obesity and preoperative pelvis are going to have a higher-risk profile for a major operative procedure. A greater consideration of local excision would be entertained. Ultimately, our approach in general for local excision alone is only early T1 cancers with low risk for lymph node spread. That would be an SM1 with no lymphovascular invasion or poor differentiation.

Key Concept: More distal lesions that can be more easily directly visualized to ensure negative resection margins provide the best patients for this approach.
In patients deemed appropriate for local excision, a variety of approaches are available. Preoperative evaluation is undertaken as outlined above. Patient positioning is determined by tumor location as emphasized previously. Anteriorly based tumors necessitate prone positioning, while posteriorly based tumors are approached via lithotomy. Standard transanal techniques are best suited for middle and lower third lesions. A safe, reproducible operative technique is discussed below. A set of multiple operating proctoscopes of varying lengths and diameters is essential (Fig. 14.2). Anal effacement sutures are placed to facilitate exposure and placement of operating proctoscopes (Fig. 14.3). A headlight is essential if lighted proctoscopes are not available. An appropriately sized proctoscope is chosen which centers the lesion in the operative field (Figs. 14.4 and 14.5). Dissection can be performed with the use of standard long instruments. However, laparoscopic instruments can be very helpful. Stay sutures are placed at the lateral borders of the lesion. A dissection margin of one cm is marked with the cautery, and the excision is begun, proceeding with a full-thickness excision (Figs. 14.6 and 14.7). The deep margin extends to the mesorectal fat (Fig. 14.8). Care is taken to ensure the specimen is not fragmented. The lesion is retrieved and pinned on a foam board and the margins oriented (Fig. 14.9). The surgeon carefully reviews the margins with the pathologist and takes additional tissue if necessary. The defect is closed transversely. The previously placed stay sutures facilitate the closure (Fig. 14.10). The closure is examined with the proctoscope to ensure adequacy of the closure and patency of the rectal lumen. Proximal, anteriorly based lesions are particularly challenging. If above the peritoneal reflection, one must be sure of adequate closure. A preoperative discussion should be done with the patient regarding the possible need for laparoscopy or laparotomy and the potential need for proximal diverting loop ileostomy. If the integrity of the anastomosis is unclear, laparoscopy with proctoscopy and leak testing can be performed. Revision of the closure or formal proctectomy with or without diversion may be necessary if an intraperitoneal leak is found. 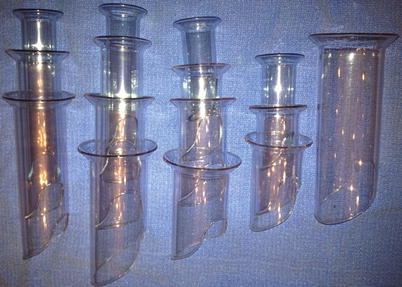