In laparoscopic left colectomy (LapLC), the mobilization of the sigmoid colon and the splenic flexure of the colon are necessary. Although the surgical technique in the splenic flexure of the colon is not easy due to the thickened omentum, it is ensured with an understanding of the fascial configuration. With regards to lymph node dissection, the region of the inferior mesenteric artery (IMA) is a dissection region and it is important to dissect around the left colic artery (LCA).

7.2 Resection Range and Degree of the Lymph Node Dissection

LapLC is similar to open left colectomy in terms of resection range and degree of lymph node dissection, except for the approach to the abdominal cavity. In the left colon including the splenic flexure of the colon, lymph flow is mostly to the IMA due to its embryological hindgut origin. Therefore, it is necessary to dissect from the LCA [1–3].

7.3 Fascial Composition and Fusion Fascia of the Left Colon and the Splenic Flexure of the Colon 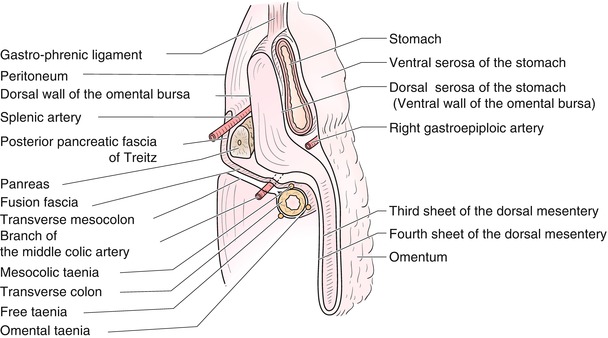 Relationship between intestinal rotation and the transverse mesocolon. In the longitudinal section during the intestinal rotation, the omentum (dorsal mesentery), and the mesocolon have no relation (a); however, they form a fusion fascia when the intestinal rotation is completed (b)
The splenic flexure of the colon is defined as the terminal one-third of the anal side of the transverse colon leading to the first portion of the descending colon [4]. It is the site of transition between the transverse colon having a certain degree of mobilisation and the descending colon with fixation to the retroperitoneum by fusion (Fig. 7.1).
The left mesocolon forms the left fascia of Toldt in fusion with the peritoneum of the dorsal abdominal wall (Fig. 7.4). However, in the sigmoid colon the fan-shaped sigmoid fossa is typically formed behind the sigmoid mesocolon due to incomplete fusion of the dorsal mesentery and retroperitoneum (Fig. 7.4b). Thus, the mobilisation of the left colon requires dissection between the left fusion fascia of Toldt and the deep subperitoneal fascia. The only anatomical landmarks for this dissection are the spermatic vessels and the ureter (Fig. 7.4 dotted line).