The angle between the body and the thighs of the patients should be kept at near 180°, in order to avoid clashing of instruments with patient’s thighs when working in the upper quadrants of the abdomen (Fig. 31.2). Care should be taken to avoid hyperextension of the legs at the hips, which can lead to damage to the sciatic and obturator nerves. This is best avoided by lowering both legs to the appropriate level without hyperextending them before draping the patients; a blind positioning of the legs after draping can potentially cause injury. 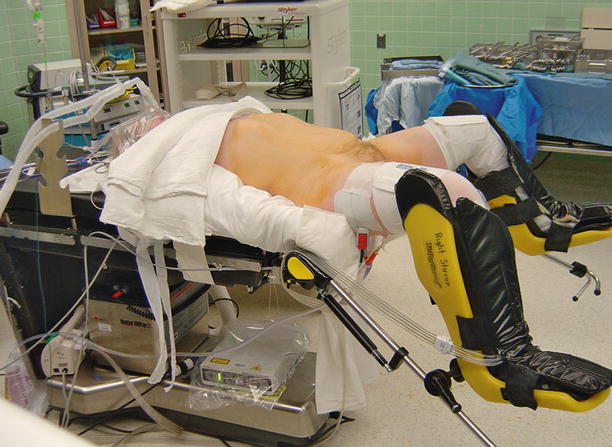 Patient positioning. Notice the padding and the degree of flexion at the hip

Dealing with the Small Bowel

Key Concept: Gravity is your friend in keeping the small bowel out of the way and often requires steep changes in position.
Gaining an adequate exposure away from the small intestines can be a challenge. In general, the working quadrant of the abdomen should be positioned higher than the other quadrants, so that the small intestines fall away from the operative field (Fig. 31.3). Although extreme positioning with routine use of a beanbag and tapes can be helpful, this time-consuming and cumbersome practice is not necessary, though admittedly up to individual surgeon preference. More often, a commonly available gel pad placed on the operating room table provides enough support and traction to keep the patients from sliding in almost all instances. The use of shoulder braces, which can cause brachial nerve injury, should be avoided. In cases where gravity and positioning are not enough, placing an additional retractor, a moist gauze pad placed through a larger trocar, a moist laparotomy pad, or a radiologically tagged surgical towel placed through a hand-access incision can be helpful in retracting the small intestines away from the field [5]. 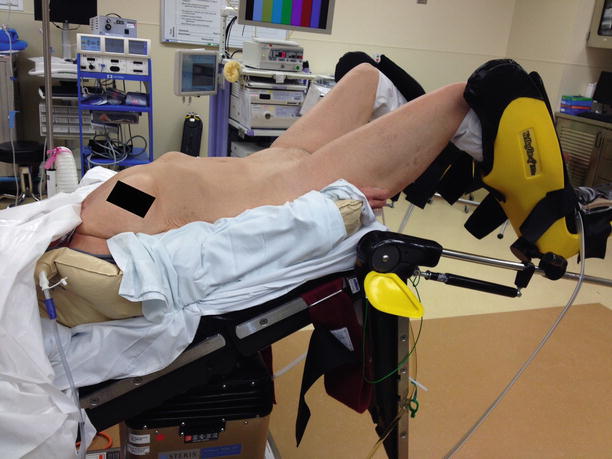 Key Concept: Not only can poor trocar placement lead to a more difficult operation, but trocar and instrument-related injuries (though rare) can lead to overt or missed injuries to almost all intra-abdominal structures with devastating consequences.
Trocar-related injuries might occur regardless of the type of entry method used. Overall, the incidence of bowel injury during laparoscopy is relatively small (0.13 %). According to a meta-analysis performed by Van der Voort and colleagues [6], the most common site of bowel injury caused by trocar insertion is the small intestines (55 %) followed by the colon (38 %). Small bowel injury during laparoscopic surgery may happen in several ways: (1) Veress needle injury, (2) thermal injury, (3) crush injury, or (4) laceration by laparoscopic instrument or ports. Thermal injury can occur by either lateral thermal spread or stray currents generating heat along the path between the active and the ground electrodes (Video 31.1). Lateral thermal spread is less of a concern for bipolar energy device. In a study using porcine muscles, only the monopolar energy device increased the temperature of the tissue higher than the safe level of 42 °C when measured 1 cm away from the tip of the instruments on 5–15 s applications [7]. More importantly, for all different types of energy devices (monopolar, bipolar, ultrasonic), the tip remained above the safe temperature (42 °C) for several seconds. After 5-s application at highest settings, it took monopolar diathermy, ultrasonic, and bipolar device, 35, 10, and 5 s, respectively, for tips to cool down below the safe working temperature. In general, it is a safe practice to minimize the use of monopolar diathermy in laparoscopic colectomy and to not touch any surrounding tissues with energy devices immediately after prolonged energy activation. Inadvertent currents can spread by either insulation failure or by direct coupling [8]. Direct coupling occurs when an energy device touches another metallic instrument. To avoid and detect inadvertent energy device-induced thermal injury, it is important to keep the entire length of the instrument in laparoscopic view during energy application whenever it is possible. Additionally, use of plastic trocars (versus older metal trocars) will minimize the risk of capacitive coupling.
A crush injury to the small intestines happens when a laparoscopic instrument, such as a bowel grasper, forcibly pulls in a loop of the small intestines into a trocar. In order to avoid this type of injury, the instrument should only be removed after a confirmation that the jaw of instrument is empty and closed. A penetrating injury to the small intestines can occur during a blind insertion of a sharp laparoscopic instrument. Laparoscopic instruments should be inserted in the ventral direction away from the internal organs under direct visualization. The instrument should not be advanced if any amount of resistance is encountered. Finally, one of the most common laparoscopic instrument injuries is an inadvertent serosal tear or wall injury from grasping the bowel too hard or tearing the bowel while “running” or moving the bowel. Unfortunately, this is often a missed injury as the instrument and affected bowel are off screen. To minimize this, you should always keep both instruments in plain view, along with gentle handling of the bowel with atraumatic bowel graspers.
Although rare, a trocar-related vascular injury can result in a fatal complication. In a review of 696,502 laparoscopic procedures [9], Azevedo et al., found the incidence of major vessel injury to be 0.006 %. In order to avoid a major vessel injury during closed entry, precaution and vigilance need to be maintained at all times. The patient should be in a flat supine position rather than the Trendelenburg position, as the latter decreases the distance between the sacral promontory and the abdominal wall, leading to an increase in the risk of major vessel injury. One of the ways to avoid potential complications related to Veress needle insertion is to limit its use in re-operative cases. An insertion technique which has worked very well for us is a technique in which we create a negative intraperitoneal pressure by pulling up on the stalk of umbilicus with a Kocher clamp while inserting a Veress needle through the base of the umbilicus, the thinnest portion of the abdominal wall. It is important to keep the stopcock of a Veress needle open to air during insertion, so that a rush of air into negatively pressured peritoneal cavity will cause the small intestines to fall away from the abdominal wall immediately upon entry (Fig. 31.4).

Veress needle enters the thinnest portion of the abdominal wall, while negative pressure is being created by pulling up the umbilical stalk with Kocher clamp

Key Concept: Right colectomy poses the potential for unique complications including damage to the duodenum, ileocolic/middle colic vessels, and right ureter. A systematic approach, knowledge of the pertinent anatomy, and achieving the correct plane of dissection from the start will keep you out of trouble.

Obtaining an adequate exposure is a prerequisite to avoid complications in any types of surgery. To achieve this during laparoscopic right colectomy, the patient is placed in the Trendelenburg position with the right side of the patient tilted up. The transverse colon along with the greater omentum is retracted in the cephalad direction. Loops of the terminal ileum are gently swept into the pelvis, and the rest of small bowel is allowed to fall to the patient’s left side. In difficult cases, use of moist gauze placed through a trocar can be helpful in retracting.

(a) Entering correct plane from lateral to medial approach. (b) Entering correct plane from medial-to-lateral approach. (c) Entering wrong plane from medial-to-lateral approach by dissecting too deep into retroperitoneum
During the medial-to-lateral dissection, the major vessels are usually divided first (Fig. 31.5b). Because the major (ileocolic, IMA) vessels are located medial to the embryologic fusion plane, there is a natural tendency to delve into the retroperitoneum (Fig. 31.5c). This can result in unnecessary bleeding and/or injury to retroperitoneal structures such as the ureter or the duodenum. To avoid getting into the wrong plane, the right colon and its mesentery should be tented upward with strong retraction while bluntly separating the retroperitoneum away. This upward tension is best achieved by bowel grasper with its jaw open wide (Fig. 31.6). The correct plane is usually one superficial layer above the perceived plane. The mantra “the purple goes down” well describes the process of separating the colon mesentery away from the retroperitoneum (Fig. 31.7). 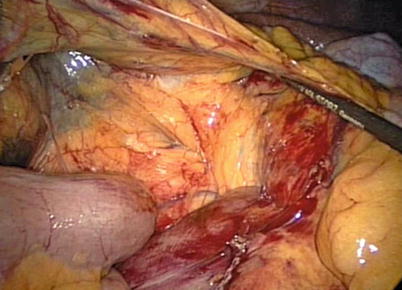 “Purple goes down.” Medial approach to a right colon demonstrates the yellow undersurface of the right colon mesentery and “purple” retroperitoneal fascia left down 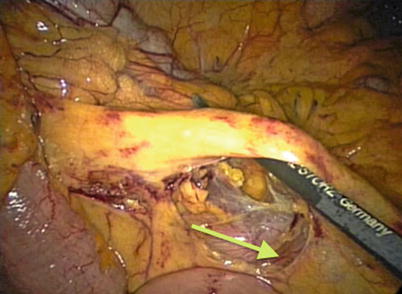 Defining the duodenum on a right colectomy. The ileocolic pedicle is elevated with the duodenum under the proximal vessel (arrow)
In dissecting the duodenum away from the mesocolon, one must be mindful of two potential complications: (1) injury to the duodenum and (2) avulsion of the gastrocolic trunk of Henle. Thermal injury to the duodenum can happen if the tip of energy device is too close to the duodenum while dividing ileocolic or middle colic pedicle (Fig. 31.9). It is imperative to visualize the entire length of the active blade. A blunt injury to the duodenum can also result from aggressive dissection of the middle colic vessels. Therefore, direct manipulation of the duodenum should be minimized. If the injury should occur, it needs to be immediately recognized and repaired. Small or partial thickness injury can be suture repaired laparoscopically. More extensive injury needs to be repaired by open approach. Careful dissection should be maintained during dissection of the right branch of the middle colic vessels. Injury to gastrocolic trunk of Henle (vein connecting gastroepiploic vein and the right branch of the middle colic vein) located in this area can result in severe bleeding that is very difficult to control, since it drains into SMV. To avoid this, vigilance and care should be maintained when dissecting over the pancreas. If bleeding occurs, wide exposure and a precise use of a bipolar energy device can control the bleeding in most cases.