The radial forearm flap is the most commonly used technique for phalloplasty.

The goal of penile construction is to create a functional and aesthetic phallus.

The sequence of surgery is to first perform a subcutaneous mastectomy, followed by a hysterectomy and oophorectomy, combined with a vaginectomy, scrotoplasty, and reconstruction of the horizontal part of the urethra (similar to a metoidioplasty) and later the actual phalloplasty.

A metoidioplasty does not offer nearly all the benefits attributed to a phalloplasty, particularly a phallus long enough to allow penetration during sexual intercourse, thereby avoiding the use of a prosthesis. In addition, some patients have problems voiding while standing.

Second-stage surgery consists of the microsurgical transfer of the radial forearm flap, tubularization, and scrotoplasty.

With a growing demand for female-to-male gender reassignment surgeries, more reconstructive surgeons are learning the procedures necessary for gender affirmation bottom surgery, and methods are becoming safer and more successful. Phalloplasty and metoidioplasty are two of these procedures. Each technique has advantages and disadvantages. Although less prone to complications and less costly, a metoidioplasty does not offer nearly all the benefits attributed to a phalloplasty, particularly a phallus long enough to allow penetration during sexual intercourse, thus avoiding the use of a prosthesis. In addition, some patients have problems voiding while standing. Thus phalloplasty has become the preferred procedure for patients wishing to live fully as a male. This chapter will focus on the method of using a free flap from the radial forearm of the patient’s nondominant side to create a neophallus.

The radial forearm free flap (RFFF) has become the most frequently used surgical technique for a phalloplasty and is superior to all other techniques, because it effectively meets the goal of creating a pleasing and sensate neophallus with a functioning neourethra to allow voiding from the distal end of the neophallus.1 Originally developed in 1981 by Yang et al for the release of a cervical skin contracture in burn patients, the RFFF is now often used for both head and neck and penile reconstruction.2 Although there is notable donor-site morbidity and this multistage procedure can last anywhere from 5 to 12 hours, this technique makes it possible for patients both to void while standing and have penetrative sexual intercourse; bone can be added as an osteocutaneous flap or when a penile prosthesis is placed in the flap at a later stage. Patients view this as a fair exchange that allows them to fully experience life as a male. Also, in terms of surgical positioning, the forearm donor site is far from the groin, which enables two to three surgical teams to operate simultaneously (Fig. 8-1). 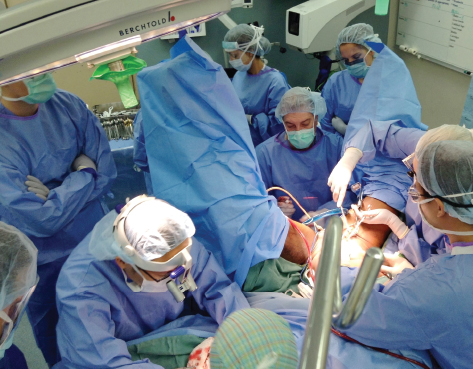 In this chapter we will highlight our surgical technique, donor-site morbidity, and outcomes in an effort to elucidate this form of construction in the growing field of penile surgery. An adequate preoperative evaluation to ensure realistic expectations, coupled with a dialogue-based informed consent preferably through a multidisciplinary approach, enables successful surgical outcomes in this patient population.

Justification for the Radial Forearm Flap

The ideal flap for penile reconstruction and construction should preferably be a one-stage procedure that provides an aesthetically pleasing and functional phallus, has minimal donor-site morbidity and functional loss, generates sufficient tactile and erogenous sensation, and has sufficient tissue to allow tubularization around the neourethra if not prelaminated. RFFFs can meet most of these prerequisites, with the advantage of providing thin, malleable, and sensate tissue with a long pedicle that can easily be dissected and used for free tissue transfer. The location of a forearm donor site away from the groin also allows an effective two-team surgical approach.

The goal of penile construction is to create a functional and aesthetic phallus. Functional goals include normal urinary function and phallic rigidity for penetrative sexual intercourse. Normal urinary function may be achieved by the “tube-within-a-tube” method, which allows voiding through the neourethra at the tip of the phallus while standing or with our technique of urethra flap prelamination with mucosa and/or a skin graft. Sensation to the shaft and glans of the constructed penis should be adequate for protection sensation and provide erogenous sensation helping with orgasm. The forearm donor site should leave a well-accepted scar without functional or significant sensory loss. These goals should be met in a surgical procedure that is predictably reproducible.

Female-to-male transgender patients are increasingly seeking gender affirmation surgery to alleviate their gender dysphoria. Phalloplasty procedures, which enable the patient to void while standing and achieve penetrative sexual intercourse, are certainly favored. Given the potential morbidity associated with the complex phalloplasty procedure, an adequate preoperative evaluation of these patients is essential. The need for an adequate gender dysphoria evaluation and medical clearance is unique to this patient population. Gender dysphoria, ICD-9-CM 302.85. This is distress caused by a discrepancy between the person’s gender identity and external phenotype. According to the Standards of Care of the World Professional Association of Transgender Health, a mental health assessment by two different mental health professionals who treat transgender patients is necessary before proceeding with a phalloplasty construction. Adequate social support is also encouraged to facilitate a successful recovery. The surgeon should remain involved in all stages of the preoperative evaluation by corresponding with the patient’s mental health provider and the urogynecologist. 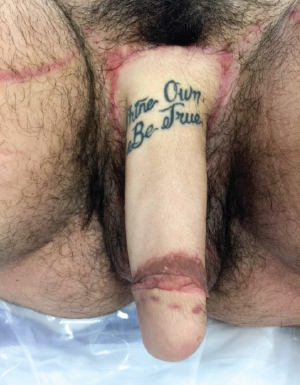 Fig. 8-2 A 24-year-old transman with a radial forearm osteocutaneous flap for phalloplasty at 3-month follow-up. He urinates in the standing position and has begun penetrative vaginal intercourse.

A clear and candid discussion regarding the patient’s desired goals from surgery, including the length and circumference of the neophallus, allows the surgeon to determine whether expectations are realistic given the patient’s anatomy. An osteocutaneous versus fasciocutaneous flap option is given to patients; the former will often allow a construction that will not necessarily require an implant for rigidity, because a portion of the radius bone is harvested with the flap (Fig. 8-2). Specific information regarding previous infections and the responsible microorganisms helps in selecting perioperative antibiotics, because postoperative infections delay recovery and increase postoperative morbidity.

Microsurgical construction performed in an RFFF for phalloplasty requires several additional preoperative assessments. Appropriate preoperative studies to ensure adequate arterial inflow and venous outflow of the surrounding vasculature of the genitalia are required, particularly if there has been any previous surgery or trauma. In these cases CT angiography of the pelvis and groin may be performed. Intact sensation in the genital area is vital, because the dorsal clitoral nerve, ilioinguinal nerve, and genitofemoral nerve are used to achieve erogenous and protective sensation to the neophallus, respectively.3 A surgeon should have a clear answer regarding the patient’s ability to obtain an orgasm before surgery, so that this can be matched after the construction.

If the patient has difficulty achieving an orgasm before the surgical stages, it will more than likely be difficult for the patient to have one after surgery despite the anticipated reduction in dysphoria. An Allen test is essential to guarantee that the vascularity of the hand will not be compromised with harvest of the RFFF. In addition, a preoperative radiograph of the donor forearm is indicated in patients in whom an osteocutaneous flap has been planned to evaluate the radius bone stock.

Certain findings during the preoperative evaluation make the RFFF contraindicated in some female-to-male transgender patients. Although an acceptable donor site in popular opinion (Fig. 8-3), two of the main aesthetic contraindications to the RFFF are the occasional refusal of donor-site forearm scarring or the transfer of forearm tattoos to the neophallus. An abnormal preoperative Allen test signifies poor vasculature, making the patient an unfit candidate for an RFFF with that particular donor site. Because delicate vascular, neural, and urethral microsurgical anastomoses are performed intraoperatively, patients who do not stop smoking at least 4 weeks before surgery should not undergo an RFFF for phalloplasty. In some European centers, surgeons want 1 year of smoking cessation before phalloplasty procedures. 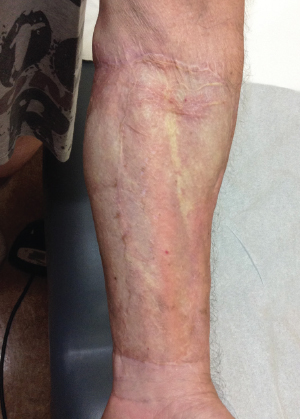 Preoperative depilation of the forearm is recommended when performing the tube-within-a-tube technique for neourethra forearm flap design.4 In our practice we commonly perform forearm flap prelamination with mucosa and occasionally a skin graft,5 which obviates the need for depilation of the forearm tissue. In addition, from an aesthetic standpoint, because of the abundant hair in the mons region of a transman taking testosterone, the abrupt change from a mons full of hair to a hairless penile shaft does not lead to a smooth transition, and thus we do not recommend electrolysis or depilation of the forearm tissues for this reason. Depilation of both the mons region and penile shaft may be performed after surgery if desired.

Regarding hormonal therapy, our patients stop taking exogenous steroids 2 weeks before surgery. Although we will not uncommonly use anticoagulation such as intravenous heparin during the microsurgical procedure, the risk of deep vein thrombosis is real given the use of steroids and a concomitant long surgical procedure.6

The current sequence of surgery at the University of Miami Hospital is first a subcutaneous mastectomy (at an early stage, because it is so important to them), followed by a hysterectomy and oophorectomy combined with a vaginectomy, scrotoplasty, and reconstruction of the horizontal part of the urethra (similar to a metoidioplasty) and later the actual phalloplasty. We think that this sequence allows patients to experience how “happy” they are with the metoidioplasty, leading to a high rate of phallus transition. Although some patients may not require a phallus and there are fewer complications such as a fistula and stenosis with the final phalloplasty procedure, size limitations are considerably decreased with a metoidioplasty, because only a micropenis is attainable, which is a disease according to the International Classification of Diseases (ICD).

In this first stage of gender affirmation surgery, the three main goals are:

1. Vaginectomy (combined with a hysterectomy and oophorectomy if not already performed)

Two to three teams operate simultaneously. One team is made up of an urogynecologist in our case, who performs the vaginal mucosa harvest, harvest of the pedicled anterior vaginal mucosal wall flap for urethral lengthening, and closure of the vaginal canal. He or she will also perform the hysterectomy and oophorectomy if these were not already done previously; in select patients they can be performed concurrently. A second team will harvest bilateral buccal mucosal grafts if vaginal mucosal length is insufficient for the neourethra (Fig. 8-4). We have found that mucosal grafts (if available) are superior to autologous skin grafts for neourethra prelamination. This has been concurrent with other studies available.7 If a metoidioplasty has been performed in the past, the vaginectomy will have commonly been done, and prelamination of the RFFF will be done with a skin graft and buccal mucosal graft only if that is our preferred technique. In addition, the urethral lengthening will have already been accomplished. In patients in whom no surgical intervention has been performed on the transmen’s external genitalia, we have used an anterior vaginal flap solely or to reinforce the external urethral lengthening, which is performed with the labia minora tissues (Fig. 8-5). 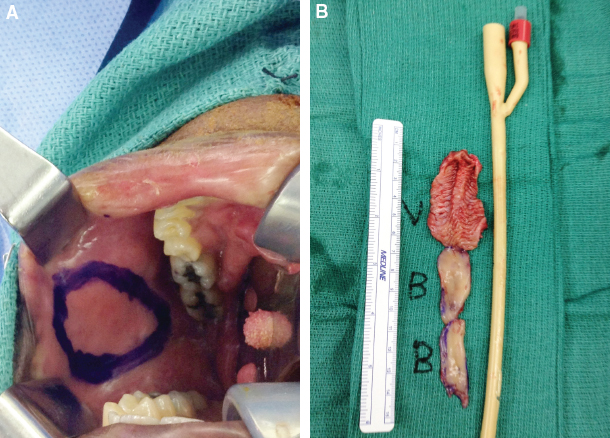