Digestion and Absorption of Dietary Triglycerides

Several important steps in triglyceride digestion occur within the stomach . Lipase activity is readily detected in the gastric fluid, and in normal adult humans appears to account for 10–30 % of triglyceride hydrolysis. Lipase is produced in serous glands at the base of the tongue or in acinar cells in pharyngeal tissue, and the lipase is then swallowed along with the food bolus. Lingual lipase generating free fatty acids in the mouth and pharynx may play a role in gustatory fatty acid signaling (fatty acid taste). In humans, the lipase found in gastric fluid appears to originate mainly within chief cells of the gastric mucosa . Secretion of gastric lipase can be stimulated by cholinergic agents, gastrin , and possibly other gastrointestinal hormones such as cholecystokinin . Gastric lipase has a broad pH optimum (pH 2–6) and is resistant to pepsin and therefore active within the environment of the stomach. Gastric lipase emptied into the duodenum continues to be active within the environment of the small intestine , although pancreatic lipase is the enzyme responsible for most of the triglyceride hydrolysis (see below). Gastric lipase preferentially hydrolyzes the ester bond in the 3 position of triacylglycerol, generating mainly fatty acids and diglycerides.
Within the stomach , there is acid-peptic digestion of the protein component of food lipoproteins and liberation of oil droplets. The churning action of gastric contractions against the closed pylorus results in the formation of an emulsion containing small lipid particles (less than 2 nm) that can then be emptied from the stomach into the duodenum. These small oil droplets with a large surface-to-volume ratio are the preferred substrate for the colipase –pancreatic lipase enzyme system that is responsible for the majority of triglyceride digestion in adults (see below).

As the gastric fluid empties into the duodenum, there is initiation of a coordinated series of events designed to properly deliver biliary and pancreatic secretions into the small intestine to continue the process of triglyceride digestion. Exposure of the duodenal and upper jejunal mucosa to gastric acid stimulates secretion of the peptide hormone secretin from neuroendocrine cells in the mucosa into the portal circulation. Secretin , in turn, stimulates production of a bicarbonate–rich fluid by the pancreatic ductular cells. Delivery of this alkaline pancreatic fluid into the duodenum partially neutralizes the gastric acid secretion. The pH of the upper small intestine is therefore adjusted to approximately pH 6.5, which is optimal for the activity of the colipase -pancreatic lipase enzyme system. Fatty acids and certain amino acids in the intestinal fluid stimulate the release of a second peptide hormone, cholecystokinin (CCK) (also called pancreozymin ) from the mucosa into the portal circulation. CCK induces digestive enzyme secretion by the pancreatic acinar cells , including the secretion of pancreatic lipase and colipase. In addition, CCK also stimulates contraction of the gallbladder and relaxation of Oddi’s sphincter , resulting in the delivery of concentrated bile into the small intestine. Secretin, CCK, and other hormones produced in the intestinal mucosa also regulate gastric motility , preventing excessively rapid delivery of the food bolus into the intestine and overwhelming of the digestive processes. For a detailed discussion of the regulation of gastric emptying, pancreatic, and biliary secretion, see Chaps. 3, 4 and 12.

The process of triglyceride digestion has been studied in vitro using phase contrast microscopy (Fig. 7.4). Small oil droplets are suspended in buffer containing concentrations of bile salts and phospholipids similar to those in intestinal fluid, and hydrolysis is initiated by addition of pancreatic juice. Initially, one observes the formation of calcium fatty acid soaps on the surface of the lipid droplet, which, if unchecked, would limit access of colipase and lipases to the surface of the droplet and limit further lipolysis. Formation of calcium fatty acid soaps, however, is inhibited by β-monoglycerides . This has been offered as a potential teleologic explanation for the structural specificity of pancreatic lipase , as the partial breakdown of triglyceride to fatty acids and β-monoglyceride would limit production of fatty acid soaps and favor continued digestion of the lipid droplet. 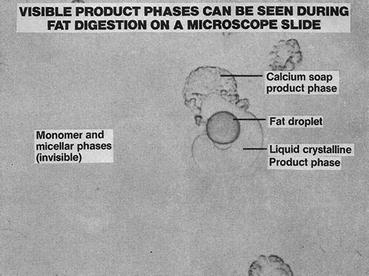 Product phases of fat digestion seen by light microscopy (Adapted from American Gastroenterological Association Teaching Slide Collection 19 ©, Bethesda, Maryland, slide 31; Used with permission)
The second, or viscous isotropic, phase involves the formation of liquid crystals containing protonated fatty acids and monoglycerides. Continued accumulation of fatty acids and monoglycerides on the surface of the lipid droplet, however, would result in product inhibition of the lipases and would limit lipolysis. The products of triglyceride digestion, however, are removed from the droplet surface by formation of vesicles and mixed micelles (see below).

Bile salts are a family of amphiphilic compounds that are important for the efficient absorption of the products of triglyceride hydrolysis. At concentrations of approximately l–5 mmol/L, bile salts form micelles, macromolecular aggregates containing up to 20 or more bile salt molecules. These disc or spherical shaped structures have the polar aspect of the bile salts facing the outside of the structure and the hydrophobic portion pointing toward the interior of the micelle. Fatty acids and other lipids are incorporated between the bile salts and in the interior of these structures, forming mixed micelles (Fig. 7.5). This results in a remarkable increase in the solubilization of fatty acids, monoglycerides, and other lipids in the aqueous environment of the luminal contents (Fig. 7.6). It should be noted, however, than even in the complete absence of luminal bile salts, some fatty acid absorption (approximately 50–75 %) still occurs. Some data indicate that unilamellar vesicles formed in the intestinal contents at low bile salt concentrations may be a vehicle for some fat absorption. Adequate luminal bile salt concentration for micelle formation, however, is required for the normal highly efficient (95 % or greater) absorption of dietary triglycerides.

4.2 Uptake of Fatty Acids and β-Monoglycerides into the Enterocyte


aFatty acid concentration x diffusion constant (D) = flux (J). All values are approximate
The uptake of fatty acids across the enterocyte brush-border membrane occurs by both passive diffusion and by protein–mediated mechanisms. Protonate long chain fatty acids diffuse across the brush-border membrane by “flip flopping” through the membrane lipid bilayer down a steep concentration gradient. Several proteins have been identified that potentially play roles in fatty acid uptake. CD36 is a 472 amino acid heavily glycosylated transmembrane protein that appears to be involved in fatty acid uptake in many tissues. In the small intestine , it is mostly expressed on the brush-border membranes of the duodenum and jejunum, with little expression in the ileum or colon. Enterocytes prepared from the jejunum of CD36 knockout mice demonstrate reduced fatty acid uptake compared with wild-type controls. CD36 knockout mice, however, do not have significant fat malabsorption , although fat absorption is shifted to the more distal small intestine. Current observations indicate that CD36 mainly plays a regulatory role in intestinal triglyceride synthesis and chylomicron production (see below). CD36 is also expressed in lingual taste buds where is mediates perception of fatty acids, and may be involved in satiety signaling. FATP4 is high expressed in the small intestine, but is localized to the endoplasmic reticulum and subapical membranes. It, therefore, does not function as a true membrane transporter, but facilitates fatty acid uptake by virtue of its acyl CoA synthase activity. This results in metabolic trapping of fatty acids via conversion to fatty acyl CoA products that undergo rapid conversion to complex lipids, maintaining a concentration gradient for fatty acid uptake. Other candidate proteins involved in enterocyte fatty acid uptake (FABPpm, etc.) have been identified, but their role has not been completely elucidated. Further research is needed to define the relative contributions of diffusion and protein-mediated transport to enterocyte fatty acid uptake.
< div class='tao-gold-member'>
Only gold members can continue reading. Log In or Register to continue