Uniformly, resectable disease includes tumors that do not appear to contact the CA, HA, SMA, or SMV given that a margin-negative resection can often be achieved without any prior therapy in patients with these tumors. More recently, several groups have also considered as resectable tumors with limited involvement of the SMV–PV confluence in which an R0 resection is still possible, albeit with vascular resection and reconstruction. For example, the definition used at MDACC considers tumors resectable if there is abutment of the SMV–PV with patent vessels (no occlusion) [20]. The NCCN definition also classifies as resectable any tumor with ≤180° contact of the SMV–PV but without any vein contour irregularity [21] (Table 1.1, Fig. 1.1). 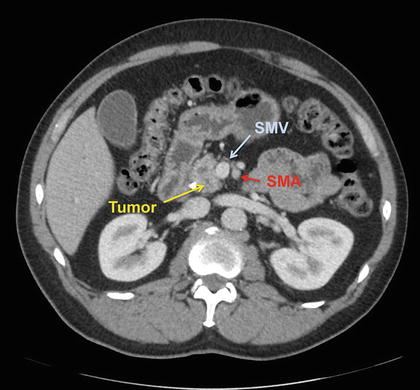 Definitions of locally advanced disease (LAD) also vary, although in general, LAD characterizes those patients in whom the likelihood of response to non-operative therapy sufficient to allow for a subsequent margin-negative resection is nearly zero. For example, according to the MDACC definition, locally advanced disease consists of tumors that involve the SMA greater than 180°, those that encase the CA or CHA without a technical option for reconstruction, and those which occlude the SMV–PV with no technical option for reconstruction [20].
The NCCN considers tumors of the pancreatic head and uncinate process locally advanced if the tumor demonstrates contact with the first jejunal vein draining into the SMV or an unreconstructable SMV–PV confluence. Tumors with >180° contact with the SMA, CA, or contact the first jejunal arterial SMA branch are also considered locally advanced. Body and tail tumors are considered locally advanced if the SMV–PV confluence is involved and unreconstructable or if there is contact of >180° with the SMA or HA, or with the CA and aorta (Table 1.2, Figs. 1.2 and 1.3). 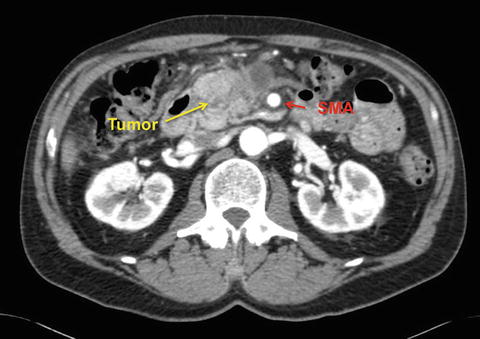 CT scan of a locally advanced pancreatic adenocarcinoma with obliteration of the SMV at the base of the mesentery, leaving no distal venous target for reconstruction 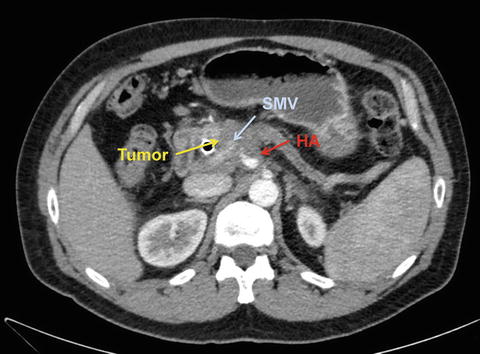 The definition of borderline resectable (BRPC) , first termed marginally resectable, was first described in 2001 in a prospective case series by Mehta et al. and was intended to describe patients at high risk of grossly positive margins with immediate resection [22]. Patients were treated with 5-FU and radiation therapy and then re-evaluated for resection; 9 of 15 patients subsequently underwent resection with negative margins [22]. In 2006, the NCCN first adopted the term “borderline resectable” to characterize the group of patients at high risk for a margin-positive resection and for whom administration of neoadjuvant therapy should be considered.
Over the past decade, a number of different radiographic classification schemes have been subsequently developed to describe which patients are considered borderline resectable, including consensus statements and guidelines from not only the NCCN, but also the International Study Group of Pancreatic Surgery (ISGPS); MDACC; Americas Hepato Pancreato-Biliary Association (AHPBA), Society of Surgical Oncology (SSO), and Society for Surgery of the Alimentary Tract (SSAT) [20, 23, 24]. A definition has also been established within the context of a now-completed multi-institutional prospective trial, the Intergroup borderline resectable pilot study (Alliance A021101) [25]. These criteria have been endorsed by the NCCN and are summarized in Table 1.3 and shown with representative CT scans in Figs. 1.4, 1.5, and 1.6. To date, no single definition has been used uniformly. 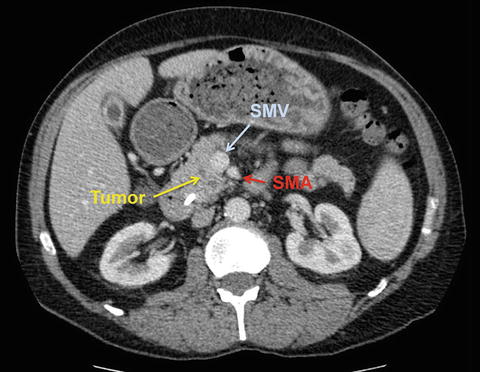 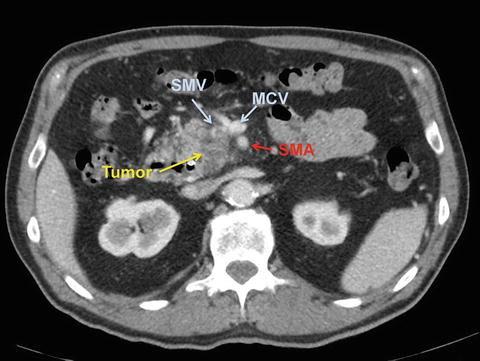 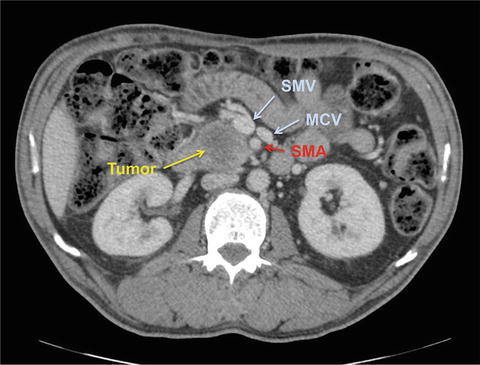 CT scan demonstrating a borderline resectable pancreatic adenocarcinoma with SMV abutment of approximately 180° at the base of the mesentery and haziness around the SMA
The most recent NCCN guidelines outline a definition of BRPC as tumor demonstrating radiographic contact with the SMV–PV of >180°, or contact of ≤180° with contour irregularity or thrombosis of the vein but with suitable vessel proximal and distal to the site of involvement to allow for adequate resection [21]. Solid tumor contact with the IVC is also considered borderline resectable. Regarding arterial involvement, NCCN considers tumor contact with CHA without extension to CA or HA bifurcation and ≤180° contact with SMA to be borderline resectable for pancreatic head lesions. A tumor within the body or tail is considered borderline resectable if there is contact ≤180° with CA or >180° of CA without involvement of aorta and with an uninvolved, intact GDA.
The MDACC definition published in 2006 allows for short segment occlusion of the SMV–PV as long as a suitable vessel is available above and below the involved segment for reconstruction [20]. Additionally, tumor abutment of ≤180° of the circumference of the SMA and short segment encasement or abutment of the CHA (usually at the GDA origin) is considered potentially resectable. In follow-up work, Katz et al. elaborated on these definitions further, to not only account for anatomical feasibility but also clinical appropriateness for pancreatectomy [26]. MDACC categorized patients into three subsets: Group A comprised patients meeting the anatomic criteria listed above; Group B consisted of patients with preoperative work-up suggestive but not diagnostic of metastasis; and Group C was made up of patients with comorbidities or those with a marginal, but potentially reversible, performance status (typically ECOG 2-3). Group B patients had CT findings suspicious for but not diagnostic of metastatic disease (indeterminate subcentimeter liver lesions or peritoneal or omental nodules too small for biopsy) or known N1 disease as determined by EUS-FNA or pre-referral laparotomy.
Only gold members can continue reading. Log In or Register to continue