The Urinary Tract: The Inside Story!

The urinary tract demonstrating the location of the kidneys, ureters, bladder and urethra


What Is the Urinary Tract?

The kidneys are two bean-shaped organs, each about the size of a fist. They are located near the middle of the back, just below the rib cage, one on each side of the spine. The urine flows from the kidneys to the bladder through tubes called ureters.
The bladder stores urine until it is released. When the bladder empties, urine flows out of the body through a tube called the urethra at the bottom of the bladder, a process called urination. This medical terminology for this process is known as micturition.

The Kidneys: The Stone Factory!

The kidney is responsible for two primary functions. First, the kidneys work by extracting water, urea, mineral salts, toxins and other waste products from the blood to form urine, with filtering units called nephrons. From the nephrons, the urine is collected into the pelvis of the kidney. Both kidneys process about 200 quarts of blood to produce about 1–2 quarts of urine/day, primarily composed of wastes and water. Secondly, the kidneys regulate the production of red blood cells, blood pressure, blood volume, blood composition and pH of the blood.
Renin is an enzyme secreted by blood vessels of the kidney, called afferent arterioles. It converts angiotensinogen, produced by the liver, to produce angiotensin I, which is further converted into angiotensin II, a potent vasoconstrictor, by angiotensin converting enzyme (ACE). The primary function of renin is to increase the blood pressure, leading to restoration of perfusion pressure within the kidneys.

The kidney is one of a pair of small bean-shaped organs of the urinary system, located near the spine. They lie on either side of the spinal column in a depression high on the posterior wall of the abdominal cavity, and are positioned behind the parietal peritoneum, called the retroperitoneum, against the deep muscles of the back. The right kidney is located slightly lower than the left kidney because the right side of the liver is much larger than the left side, pushing the kidney down to a lower position. The kidneys are surrounded by a layer of adipose tissue, called Gerota’s Fascia, which holds the kidneys in place and protects them from physical damage.
The meat of the kidney is called the parenchyma. This tissue consists of many nephrons, which represent the functional unit of the kidney (See Fig. 3.2). The nephron consists of a renal corpuscle made up of a glomerulus and Bowman’s capsule, and a renal tubule made up of a proximal convoluted tubule, loop of Henle, distal convoluted tubule and collecting duct. The kidney contains a hollow chamber, called the renal sinus. Through the renal sinus passes various blood vessels, nerves, lymphatic vessels and the ureter. The superior end of the ureter is expanded to form a funnel-shaped sac called the renal pelvis, which is located inside the renal sinus. The renal pelvis is subdivided into several tubules or major calyces. The major calyces are then subdivided into minor calyces. 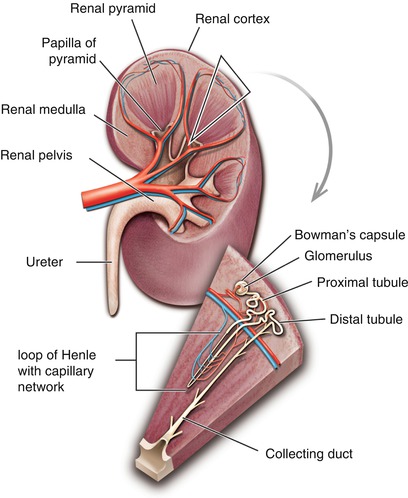 The kidney and its relationship to the nephron
The majority of stones form within the kidney. The development of stones begins with formation of crystals in the concentrated urine, which adhere to the urothelium, generating a nidus for stone growth. Many calcium oxalate stones develop Randall’s plaques, which are composed of calcium phosphate crystals. As these small stones grow, they erode through the urothelium, forming a nucleus for calcium oxalate stone formation.

The Ureters: The Rate-Limiting Step!

The ureters are a pair of thick-walled tubes leading from each kidney, which carries urine to the urinary bladder. Urine flows down partly by gravity, but mainly by a wave of contractions, called peristalsis, which pass several times per minute through the muscle layers of the ureteral walls.

Each ureter is a tubular organ measuring about 25–30 cm (10–12 in.) in length and approximately 3–4 mm in diameter. The ureter begins at the funnel-shaped renal pelvis, called the ureteropelvic junction (UPJ), and extends along the left and right sides of the body, on top of (anterior) the psoas muscle, parallel to the vertebral column as they descent toward the pelvis of the body, called the pelvic brim. At this point, the ureters cross over (anterior) to common iliac arteries, which are blood vessels to the lower extremities (left and right legs). As the ureters pass along each side of the pelvis, they then curve and enter the bladder from each side as they enter the back of the bladder, a location called the ureterovesical junction (UVJ).
Within the wall of the ureter are three layers. The inner layer, or mucous coat, is continuous with the linings of the renal tubules above and the urinary bladder below. The middle layer, or the muscular coat, is composed of largely smooth muscle fibers. The outer layer, or the fibrous coat, is primarily composed of connective tissue. Each ureter enters the bladder through a tunnel in the bladder wall, which is angled to prevent the urine from running back into the ureter, known as reflux, when the bladder contracts.
The ureters have three anatomical regions where the ureter narrows. This includes the proximal or beginning portion of the ureter, called the UPJ. The second anatomical narrowed area in where the ureter crosses in front of the common iliac vessels. Finally, the last narrowed area is the lower end of the ureter, or distal end, where the ureter enters the bladder, called the UVJ. These are the three structural regions where stones leaving the kidney can get stuck within the ureter.

The Bladder: No Other Place to Go but Out!

Urine enters the bladder from the ureters above. The urinary bladder is responsible for the storage where the average bladder capacity is approximately 400 ml of urine. Finally, the urine is delivered into the urethra for excretion from the body.
Only gold members can continue reading. Log In or Register to continue

Tags: Kidney Stone Disease
Nov 27, 2016 | Posted by admin in NEPHROLOGY | Comments Off on The Urinary Tract: The Inside Story!
Premium Wordpress Themes by UFO Themes
WordPress theme by UFO themes