LNH can be detected by using barium enema, but currently the diagnosis is usually based on endoscopic visualization of typical whitish or mucosa-coloured elevations (Fig. 32.1, 32.2 and 32.3). In cases where there is any uncertainty of the nature of nodules, a complementary histopathological analysis should be used to exclude other disease processes causing endoscopic nodularity or multiple polypoid lesions (Table 32.1; Figs. 32.1, 32.2 and 32.3). Endoscopic detection of LNH requires active search and is aided by adequate air insufflation during examination as the folds may hide nodularity [6]. LNH can also be detected by capsule endoscopy [7].

An endoscopic view of the bulb of the duodenum showing normal smooth mucosa a. In lymphonodular hyperplasia, elevations are dispersed along the walls covering the otherwise normal mucosa b 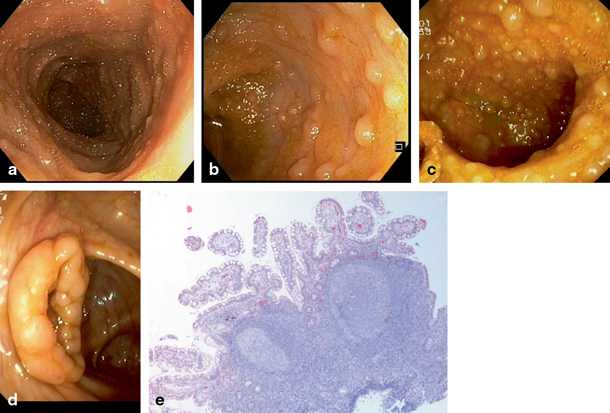 Endoscopic view of the mucosa of a healthy terminal ileum shows usually tiny lymphoid nodules a. In lymphonodular hyperplasia, the nodules are both enlarged and their numbers are increased b and in severe cases may mass on the walls c. In some cases, enlarged lymphoid nodules may extend to the region of ileocaecal valve and be visible even from the caecal side d. The biopsy taken from the terminal ileum with lymphonodular hyperplasia may be filled with lymphoid tissue as large nodules. However, normal long villi can be detected between the nodules e 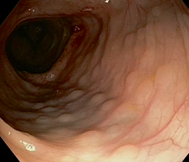 LNH may affect any part of the GI tract, and simultaneous manifestation in several parts is not uncommon [6, 10]. In the duodenum and colon, LNH is usually segmental and patchy. In the duodenum, bulb is the most commonly affected location [13].
A rare form of segmental lymphoid hyperplasia is located in the distal rectum of adults and children and has been referred to a rectal tonsil [14]. Clinically, rectal tonsil is often associated with rectal bleeding and abdominal pain , but pathophysiology is unknown. However, similar constellation may be caused by a local chlamydia infection [15].
Lymphoid follicular proctitis is a rather poorly defined condition, where rectal mucosal nodularity is related with formation of lymphoid follicles and interfollicular chronic inflammation. Symptoms are composed mucoid stools and haematochezia, and occasional response to sulfasalazine treatment suggests that some cases represent a variant of inflammatory bowel disease (IBD) [16].

Biopsy specimens from LNH typically show a lymphoid follicle with or without germinal centre (Fig. 32.2). A germinal centre is usually present and is enlarged, but additional sections may sometimes be necessary to confirm this feature. Alike reactive germinal centres, tangible body macrophages and a network of dendritic cells expressing cluster of differentiation (CD)23 are present [17]. Follicles are surrounded by a mantle zone containing T and B lymphocytes. Interfollicular tissue may have some features of paracortical zone of lymph nodes, such as high endothelial venules [17].
Epithelium overlying lymphoid follicles contains enterocytes and a specialized epithelial cell type M cells, showing characteristic microfolds. According to experimental work, the formation of the latter cell is induced by signalling form the developing lymphoid follicle. M cells contain pockets with intraepithelial lymphocytes. Functionally, M cells act as transporters of luminal antigens to be processed by the cells of lymphatic follicle. This results in the formation of an immunoglobulin A (IgA) response [18].
In case series of children with delayed type of food allergy, the majority of them presenting with LNH, the intestinal mucosa may show increase of intraepithelial lymphocytes including gamma–delta-expressing lymphocytes and cytotoxic lymphocytes [19–21]. Similarly, the numbers of intraepithelial eosinophilic leukocytes may be increased in LNH cases associated with allergy [8]. In cases where LNH associates with specific disease or condition, these may present with characteristic features, such as chronic inflammation between the follicles in IBD-associated cases, and characteristic absence of plasma cells in common variable immune deficiency [22].
Histopathological differential diagnosis involves other reactive and neoplastic causes for mucosal nodularity (Table 32.1). Malignant lymphomas of mucosa are very rare in children, but their risk is increased in children with immune deficiency or solid-organ transplantation.

GI mucosal lymphatic tissue consists of inductive and effector compartments [23]. Luminal antigens are processed, and specific immune responses are generated in the inductive compartment composed of Peyer’s patches in the ileum and isolated lymphoid follicles in other parts of the GI tract. Isolated lymphoid follicles are aggregates of T and B lymphocytes [24]. The effector compartment is the diffuse mucosal lymphatic infiltrate which is composed of immunoglobulin-producing B cells and effector T cells [18, 23]. Isolated lymphoid follicles may have germinal centres and are associated with a special type surface epithelium with M cells [24].
Number and size of isolated lymphoid follicles are variable as they respond dynamically to the signals from diet and luminal flora [25]. In a normal small intestine, the estimated amount is one per 269 villi in the jejunum and one per 28 villi in the ileum [24]. In the proximal colon, the number is 0.02/mm of muscularis mucosae and in the rectosigmoid 0.06/mm [26]. Areal density of lymphoid aggregates in the colorectum was estimated to be 1.1–2.7/cm2 [27]. Krauss et al. [5] used high-resolution endoscopy objective counting of lymphoid follicles, and they found that in adults 1–8 lymphoid follicles per endoscopy field of view in the terminal ileum and caecum can be defined as normal. Size of isolated lymphatic aggregates has been estimated to be in the range of 0.1–2 mm [24, 26, 28, 29].
Luminal commensal and pathogenic flora induces production of specific IgA response within Peyer’s patches and isolated lymphoid follicles [18, 23]. In this response, lymphoid cells accumulate and induce evolution of M cells in the surface epithelium. Germinal centres are formed and are the places where IgA genes of the B lymphocytes mutate and relevant clones are selected. There is evidence that T-independent pathways can give rise to intestinal IgA-secreting plasma cells in isolated lymphatic follicles and diffuse lamina propria, while Peyer’s patches can support both T-dependent and T-independent modes of IgA induction [18, 25].
Since the secreted IgA is induced by luminal microbes and also controls the amount of luminal microbial flora, the LNH might be viewed as a sign of IgA dysfunction, where balance is not reached within normal structural limits of lymphoid tissue [25, 30]. Accordingly, also LNH in association with immunodeficiency might be explained as compensatory mechanism to gain the balance. Similarly, increase of the numbers of lymphoid follicles in the colon of patients with infectious colitis [5], or gastric LNH in association with Helicobacter pylori infection [31], may represent similar attempts to control the infection by increased production of IgA and suggests that both increase of numbers of lymphoid follicles and their size may be involved. Children with LNH showed more abundant bacterial flora in the ileum than the control children [32], possibly supporting the role of microbial factors in the pathogenesis of LNH.
Mechanisms linking delayed type of food allergy and LNH are not clear. Evidence for association of history of IgE-mediated food allergy in infancy and increase of anti-allergen IgA levels and LNH [33] support the idea that in association with milk allergy, LNH, by providing IgA anti-allergen response, might represent an exaggerated attempt to tolerance [34].
Mechanisms of segmental localization of LNH with some preference to locate close to sphincter-like structures (distal to pylorus; proximal to ileocaecal valve), and association with motoric dysfunction (obstipation and Hirschsprung’s disease) are speculative. However, stagnation of intestinal contents related with these anatomical structures or neuromuscular dysfunction might lead the mucosa to be exposed longer to luminal antigens, and thereby increase local antigen load.
The role of alteration of immune regulatory mechanisms in pathogenesis of LNH is not clear. Bellanti et al. [35] found evidence of deficient T helper cell (Th)1 function in peripheral blood of children with LNH. There are no studies focussing on mucosal cytokine patterns specifically on LNH. However, in children with delayed type of milk allergy, where majority of patients show LNH, ileal mucosa shows increase of interleukin (IL6) messenger (mRNA) [36], and duodenal mucosa shows increase of interferon (IFN) gamma mRNA levels [37], increased numbers of cells expressing IFN gamma [38] and increased IFN gamma, IL-4 and IL-10 secretion [37], possibly indicating imbalance of pro- and anti-inflammatory cytokines.
Mechanisms of the various clinical symptoms (see below) are largely speculative. In addition to immunological mechanisms for the symptoms, also other mechanisms are possible, including diet-related changes in the microbiome and nonprotein nutrients like fermentable oligosaccharides [39]. Accordingly, it is possible that LNH and irritable colon may share some pathogenic mechanisms.

Prevalence of LNH in general pediatric or adult population is unknown. Prevalence in symptomatic children varies from 30 to 46 % in the colon [6, 8, 40], about 50 % in the ileum [6] and 19 % in the duodenum [6]. In majority of reported series, LNH was the only finding. Simultaneous presence in both upper and lower GI tract is not uncommon.

Conditions associated with LNH are summarized in Table 32.2. In children, studies performed in three different populations, in Finland [10, 19], Italy [8] and the USA [35] have shown that LNH in duodenal or ileocolonic mucosa associates with food allergy of non-IgE type (Table 32.2). Similar association has been reported in adults [39]. Krauss et al. [5] showed that overall increase in the size and number of lymphoid follicles is associated with food allergy in adults, and Carroccio et al. [39] reported that colon lymphoid hyperplasia is present in 35 % of adults with wheat and milk sensitivity. A review by Mansueto [4] concluded that LNH is present in 49 % (range 32–67) of children with food allergy, and conversely, about 66 % (42–90) of patients with LNH have food allergy. In these studies, food allergy was diagnosed based on food challenge-eliminations tests, but not all studies were based on state-of-the-art blinded tests [4]. Skin prick tests and serum IgE-based tests were mostly negative. Response time in food challenge test was long—at least several days. These findings indicate that food hypersensitivity associating with LNH is of non-IgE type and characterized by a slow response times of usually several days.