Squamous Lesions of the Uterine Cervix

Due to the hormone deficiency in perimenopausal, postmenopausal, or prepubertal states, the squamous epithelium undergoes alterations in maturation. This altered maturation is represented by a wide spectrum of changes that includes the following: (a) typical atrophy, characterized by a thin epithelium with total lack of maturation, composed of uniform basal and parabasal cells with an increased nuclear/cytoplasmic ratio, dense chromatin, and no or rare mitoses; usually, there is no pleomorphism (Fig. 2.4, e-Figs. 2.4–2.8), but in some cases mild pleomorphism may be present (e-Figs. 2.9 and 2.10); (b) atrophy with partial maturation, in which there are cells with cytoplasmic glycogen and enlarged, evenly spaced dark nuclei, as well as scattered mitoses (Fig. 2.5, e-Figs. 2.11 and 2.12); (c) pseudokoilocytosis (also known as postmenopausal squamous atypia), characterized by the presence of prominent cytoplasmic halos (more uniform in size and contour than the ones in human papillomavirus [HPV]-associated lesion, in many cases with a typical “fried-egg” appearance), nuclear hyperchromasia with evenly distributed chromatin, variation in nuclear size (usually twofold or less), and binucleation (Fig. 2.6, e-Figs. 2.13 and 2.14) (6). These changes can be focal or diffuse, and a mixture can be seen in the same or different samples from a given patient. In difficult cases in which atrophy cannot readily be differentiated from an SIL on hematoxylin and eosin (H&E), Ki-67 immunostaining becomes useful. The expression of this marker in ≥20% of cells in the basal one-third of the epithelium, ≥5% in the middle one-third of the epithelium, and in any cell of the superficial one-third of the epithelium is typical of SILs (7). Ki-67 stains only occasional parabasal cells of atrophic mucosa. In addition, atrophic epithelium is negative for p16 (8). 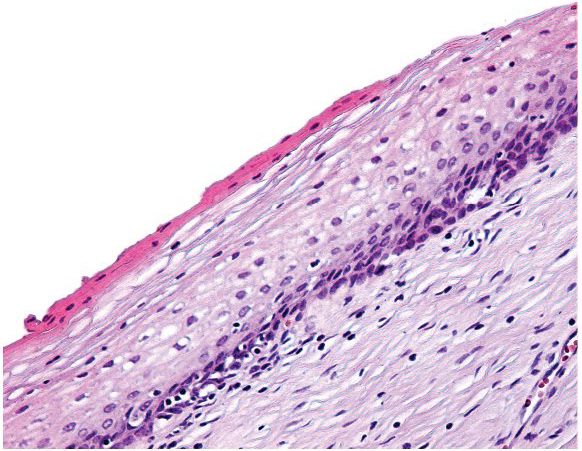 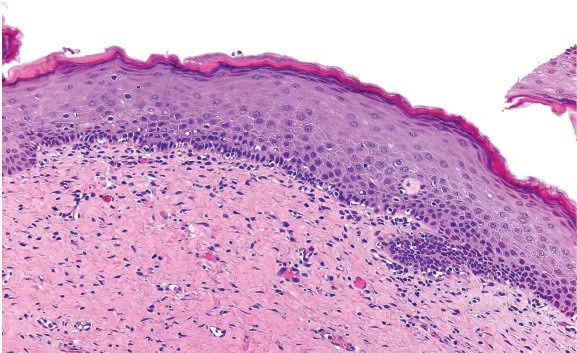 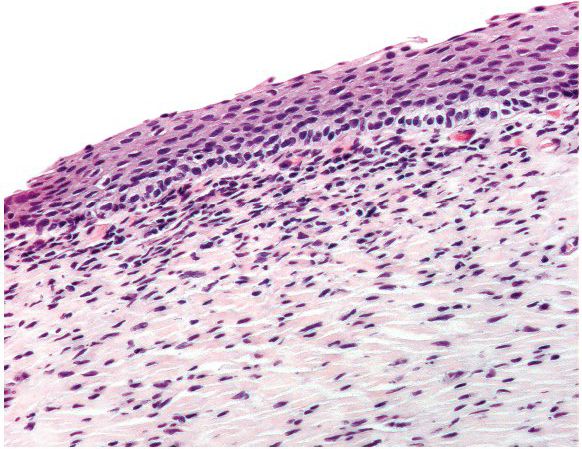 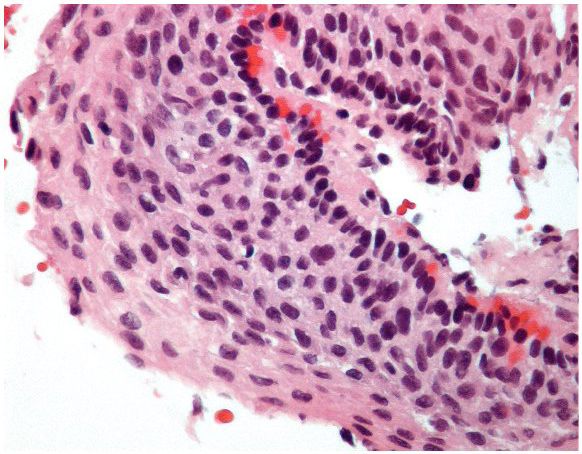 The histologic appearance of herpes simplex cervicitis depends on when the biopsy is obtained during the patient’s infection. In the initial phase, there is homogenization of the nuclei at the basal layer with vacuolization of the nuclei and/or cytoplasm; later, these changes extend into the intermediate layer, resulting ultimately in bullae that rupture and form ulcers (9,10). The ulcers are accompanied by necrosis of the epithelial cells and marked inflammation. The infected cells contain one or multiple nuclei with ground glass chromatin, which may or may not have inclusions. These cells can be seen in the epithelium or in the ulcer bed (Fig. 2.7, e-Figs. 2.15–2.17). 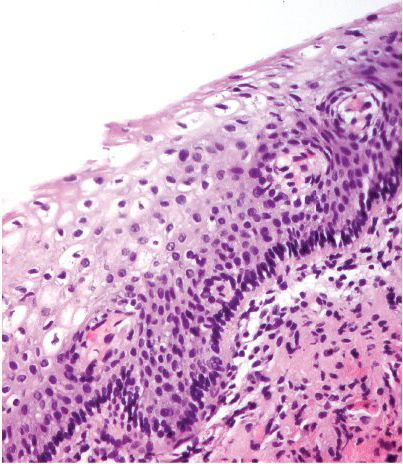 FIGURE 2.6 Pseudokoilocytosis in a postmenopausal patient—cytoplasmic clearing and mild variation in nuclear size. 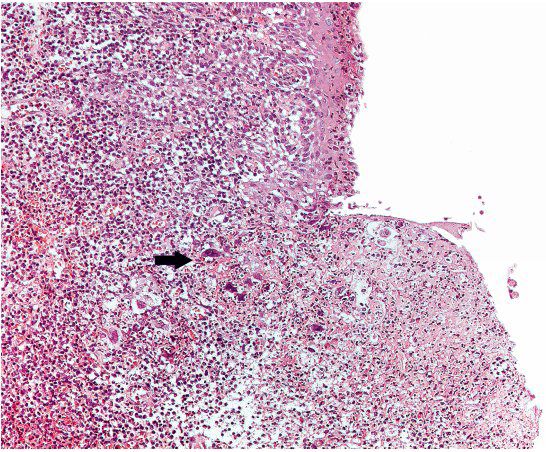 This can be associated with infectious diseases such as candidiasis, trichomoniasis, and chlamydial or with nonspecific acute or chronic inflammation. Reactive changes of the squamous epithelium include spongiosis, nuclear enlargement, changes in the chromatin pattern (hyperchromasia or vesicular nuclei), and the variable presence of nucleoli. There may be mild variation in nuclear size and shape, but nuclear spacing is relatively even. Cytoplasmic halos and binucleation of the epithelial cells can be seen (Fig. 2.8, e-Figs. 2.18–2.22). Reactive changes are not always accompanied by inflammation in the tissue sampled. Reparative changes (i.e., postbiopsy, posterosion, or ulceration) may contain marked nuclear atypia, but mitotic figures are occasional. It is important to bear in mind that no single criterion alone is sufficient to distinguish reactive changes from an SIL. In difficult cases, immunohistochemical stains (i.e., Ki-67 and p16) may be useful. Occasionally, reactive changes can have scattered Ki-67 positive nuclei in the upper two-thirds of the epithelium; however, these tend to be fewer than those seen in SILs. In these cases, p16 may be helpful because it is negative in cases of reactive changes (8). 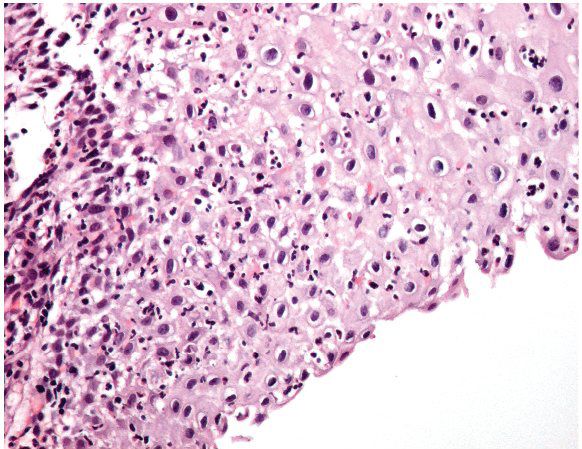 FIGURE 2.8 Reactive atypia of the squamous epithelium—enlarged nuclei and clearing of the cytoplasm with inflammatory cells in the epithelium.

Radiation-induced atypia can be identified immediately or years after radiotherapy. Acute changes include cytomegaly of the squamous epithelium due to nuclear and cytoplasmic swelling, as well as cytoplasmic vacuolization, prominent nucleoli, and erosion (Fig. 2.9, e-Figs. 2.23 and 2.24). Edema and necrosis of the stroma with infiltration by leukocytes are also present. By the sixth week after completion of therapy, the squamous epithelium becomes atrophic and the stroma has foci of necrosis and hyalinized collagen. In some cases, cytoplasmic vacuolization can persist for many years. In addition to these changes, the stroma can have enlarged fibroblasts with a reactive appearance and vascular changes, including enlargement of the endothelial cells, dilation of blood vessels followed by intimal thickening, thrombosis, and hyalinization of the walls with luminal obliteration (11).

According to the Lower Anogenital Squamous Terminology Standardization Project for HPV-associated lesions sponsored by the College of American Pathologists and the American Society for Colposcopy and Cervical Pathology (the CAP-ASCCP LAST project), the current recommendation is to use a two-tier system rather than the previously used three-tier system to classify the HPV-associated squamous intraepithelial lesions of the cervix. The two categories resulting from this binary system may be further classified by the applicable cervical intraepithelial neoplasia (CIN) subcategorization (12). 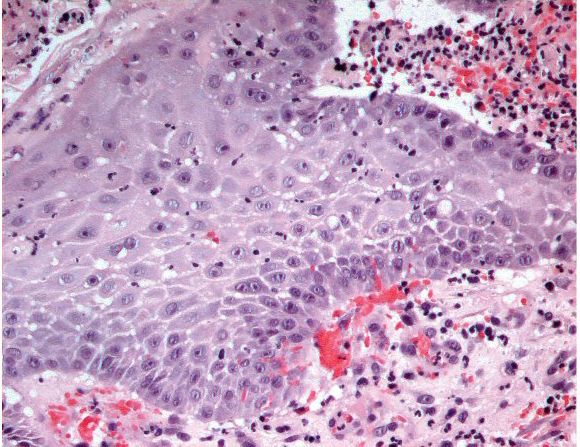 Low-grade SIL (LSIL) encompasses the cytopathic effect of HPV infection (koilocytosis) and/or mild to moderate alterations in the lower third of the squamous epithelium.

Criteria for the diagnosis of koilocytosis should be strictly followed to avoid the misclassification of nonspecific reactive changes as a HPV-related lesion. The criteria for koilocytosis are the following: marked variation in nuclear size (at least threefold variation), dark chromatin, and irregularity of the nuclear membrane (raisinoid nuclei). Although perinuclear cytoplasmic clearing or halos and binucleation are common findings, they are nonspecific and may be seen in reactive changes. Typically, the perinuclear halo related to a HPV infection is sharply demarcated due to thickening of the cell membrane. Early changes include some irregular distribution of the nuclei within the squamous epithelium (i.e., uneven spacing of the nuclei giving the impression of “clones,” as seen in cartilage) and the previously mentioned nuclear changes in scattered nuclei (Fig. 2.10, e-Figs. 2.25–2.36).

As stated earlier, LSILs can show mild to moderate alterations in the lower third of the epithelium. These alterations include the loss of the picket-fence arrangement of the basal cells and mild to moderate cytologic atypia consisting of nuclear enlargement and variation in the nuclear shape and size. Alterations in the chromatin pattern, as well as mitotic figures, may be present. These cases tend to show koilocytosis in the intermediate and superficial layers (Fig. 2.11, e-Figs. 2.37–2.41). 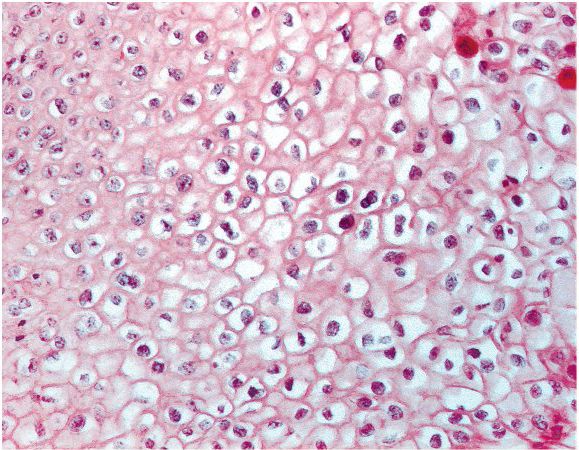 FIGURE 2.10 Low-grade squamous intraepithelial lesion (koilocytosis)—variation of nuclear size and irregularity of the nuclear membrane. Also cytoplasmic clearing with thickening of the cell membrane and binucleation. 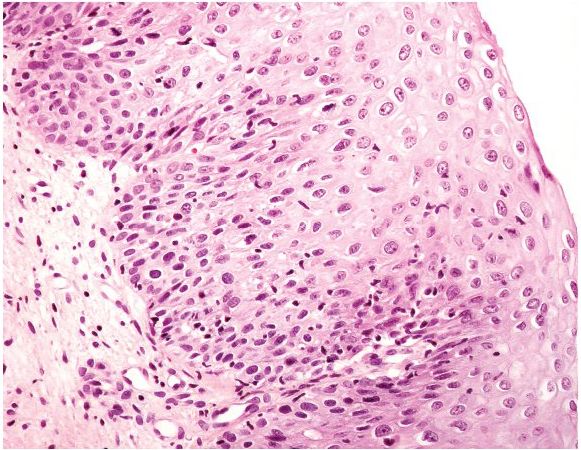 FIGURE 2.11 Low-grade squamous intraepithelial lesion (cervical intraepithelial neoplasia 1 and koilocytosis). Note the loss of picket-fence arrangement in the lower third of the epithelium.

High-grade SIL (HSIL) encompasses CIN 2 (moderate squamous dysplasia) and CIN 3 (severe squamous dysplasia/squamous carcinoma in situ). The former is characterized by the presence of mild to marked cytologic atypia encompassing the lower two-thirds of the squamous epithelium. In addition, cases in which there is marked cytologic atypia confined to just the lower third of the squamous epithelium are included within this category (Fig. 2.12, e-Figs. 2.42–2.48).

CIN 3 is characterized by the presence of moderate to marked cytologic atypia involving the full thickness of the epithelium (Fig. 2.13, e-Figs. 2.49–2.57). Although the distinction between severe squamous dysplasia and squamous carcinoma in situ is irrelevant, it is based on the presence or absence of a flattened superficial layer (i.e., this layer is absent in squamous carcinoma in situ). 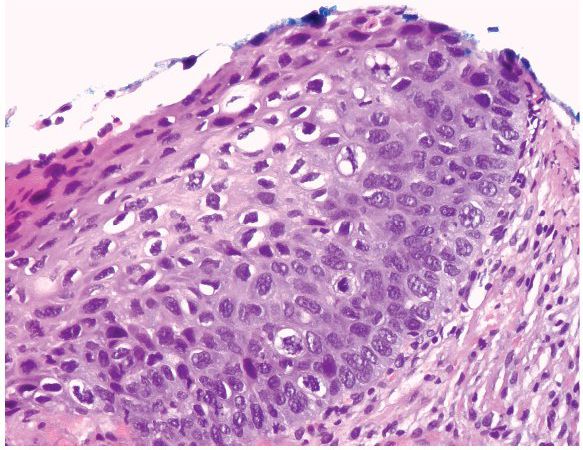 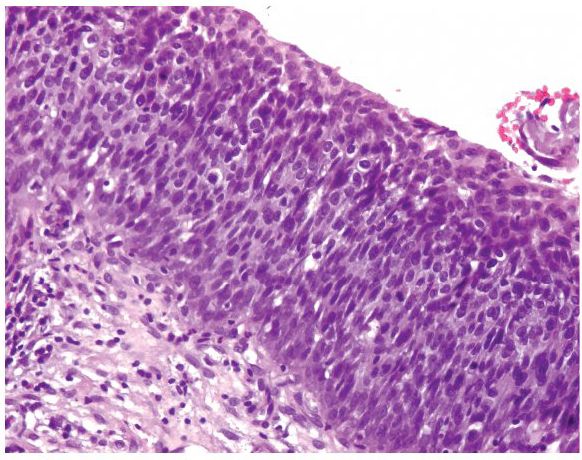 Attention to the previously mentioned features will usually facilitate the diagnosis. In addition, immunoperoxidase studies such as Ki-67 and p16 may be helpful. The pattern of staining in reactive changes has been described previously. In contrast, in koilocytosis/LSIL, there is scattered staining of the nuclei for Ki-67 in the upper epithelial strata (Fig. 2.14, e-Fig. 2.58); however, there is variability in the number of cells staining and in the intensity of staining throughout the lesion, especially in immature condylomas. Therefore, the absence of staining for Ki-67 does not exclude the diagnosis of koilocytosis/LSIL. p16 immunostaining is typically absent or focal in low-grade SILs associated with low-risk HPV types, while it is intense in low-grade SILs associated with high-risk HPV types (8,13).

As mentioned earlier, the presence of marked cytologic atypia confined to the lower third of the epithelium moves the lesion from the LSIL to the HSIL category. In addition, the diagnosis of HSIL might be entertained in lesions with an overall morphology of LSIL, but with either abnormal mitotic figures at any level or cells with an increased nuclear/cytoplasmic ratio and no nuclear pleomorphism/hyperchromasia in the middle third of the epithelium. In these cases, the use of p16 will allow the distinction between LSIL and HSIL. LSIL tends to show either a negative staining (i.e., total absence of staining or staining with these characteristics: cytoplasmic only, single cells, scattered cells, and wispy) or a focal/patchy nuclear staining (Fig. 2.15). HSIL shows a strong diffuse block staining pattern (i.e., a continuous strong nuclear or nuclear plus cytoplasmic staining of the basal layer with extension upward involving at least one-third of the epithelial thickness) (Fig. 2.16, e-Figs. 2.59 and 2.60) (12). Important caveats in the interpretation of p16 results are as follows: (a) approximately one-third of the LSILs show “block-type” positivity (14), (b) the concept of “continuous block staining” requires an “adequate” sample of properly oriented tissue that must correlate with the area of morphologic concern (12), and (c) a rare case of HSIL will fail to show the “block-type positivity” most likely due to preanalytic factors (15). In our practice, we systematically pair the use of p16 with Ki-67 to address items (a) and (c), although as per the CAP-ASCCP LAST project the use of either Ki-67 or ProExC immunostains as an adjunct of p16 or when dealing with equivocal p16 is optional (12). 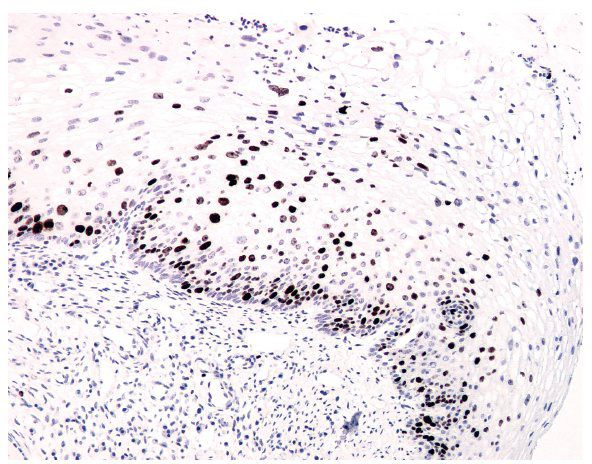 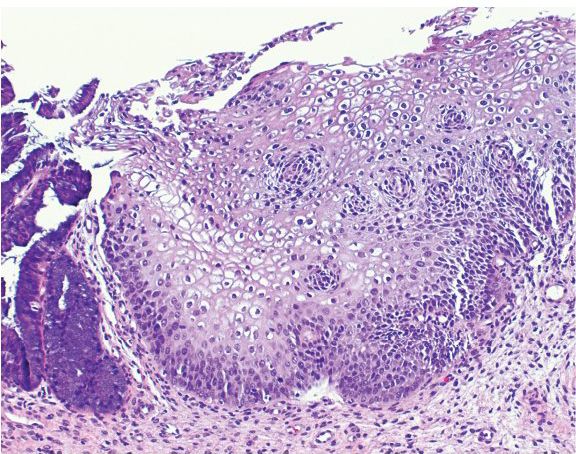 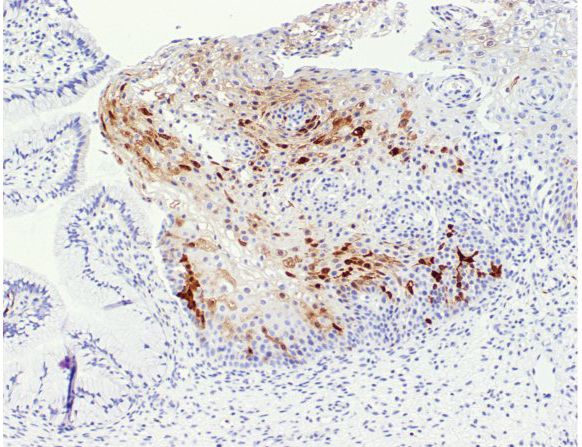 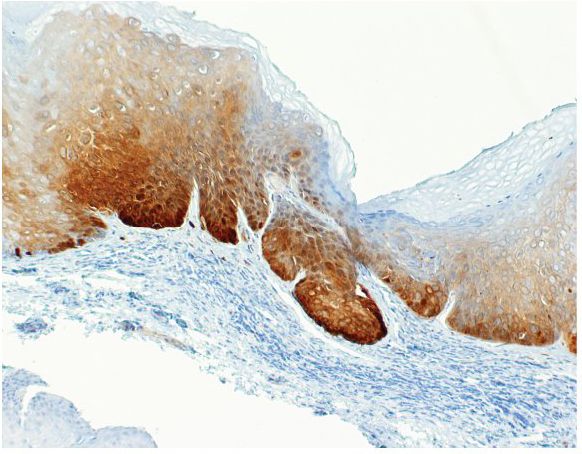 In these types of cases, strong and block-positive p16 immunostaining supports the diagnosis of HSIL.

Hyperchromasia and pleomorphism of the nuclei, as well as variation in nuclear size, and conspicuous mitotic activity are key features for the diagnosis of HSIL (Fig. 2.17, e-Figs. 2.61 and 2.62). If necessary, immunostains for Ki-67 and p16 should be used as the former is expressed in the upper two-thirds of the epithelium in high-grade SILs, while in reactive changes Ki-67 is present in only scattered nuclei (8). Regarding p16, this is expressed with a block-type pattern in HSIL which is not seen in reactive epithelial changes. 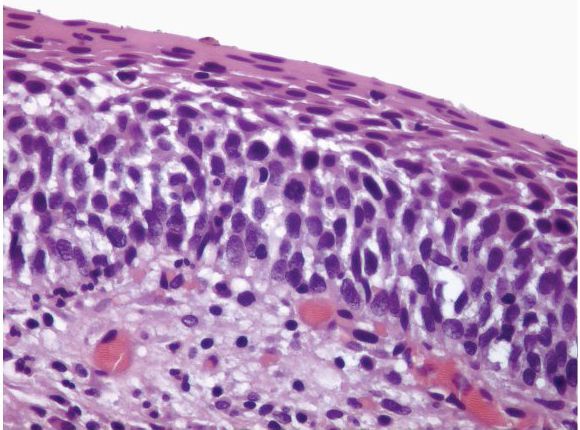 A lack of significant nuclear pleomorphism and conspicuous mitotic activity favors atrophy. However, it is important to bear in mind that some cases of atrophy can show enlarged nuclei with pleomorphism difficult to distinguish from HSIL on H&E-stained slides alone. Ki-67 and p16 immunoperoxidase studies will allow the correct diagnosis as atrophy will show a negative p16 result and either a negative Ki-67 expression or a restricted expression of this marker to the basal and parabasal layers. Attention has to be paid to the fact that inflammatory cells can be positive for Ki-67 and their presence in the upper two-thirds of an atrophic epithelium may lead to a false-positive interpretation (12,16).

The definition of microinvasive carcinoma varies according to the staging system used (International Federation of Gynecology and Obstetrics [FIGO] versus Society of Gynecologic Oncologists [SGO]) and is briefly summarized as follows:

•Stage IA, invasive carcinoma diagnosed only by microscopic examination; all macroscopically visible lesions, even with superficial invasion, are stage IB.